Driving with Ralph Peterson Jr., talking about Art Blakey, drumming all the while - WXPN 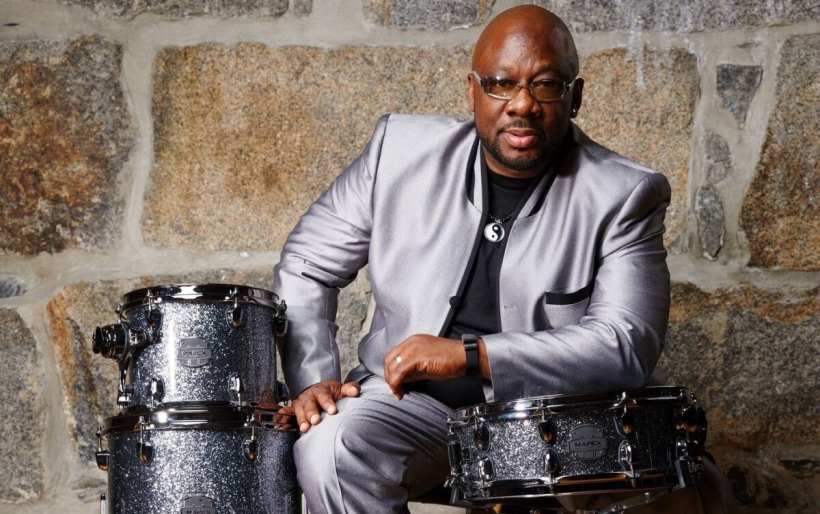 Driving with Ralph Peterson Jr., talking about Art Blakey, drumming all the while

As an in-demand drummer with a familial heritage of rhythmatists, Ralph Peterson Jr. is always driving somewhere. On the afternoon that we speak, the grown-locally drummer who played with two Marsalis (Branford, Wynton), Betty Carter, David Murray, Terrence Blanchard, Roy Hargrove, Uri Caine and other greats, is driving to Cape May, NJ (“just like the song”) and the Exit Zero Fest for his now-regular gig as leader of The Messenger Legacy,

In dedication to his time in the 1980s within the ranks of Art Blakey’s Jazz Messengers as the legend’s second drummer, Peterson is an earnest, watchful, playful boss to a group of jazz titans that currently includes saxophonists Bill Pierce and Bobby Watson, trumpeter Brian Lynch, pianist Zaccai Curtis, bassist Essiet Essiet, and Philly’s Robin Eubanks. They’ll hit up West Philly’s Annenberg Theatre on November 16th to prove their mettle.

Talking as a son of the Philly and New Jersey area, Peterson claims great love for the corridor, and great influence from members of his family from the region. “I had amazing music teachers, many of whom were my uncles and father,” said Peterson.

One of the chunks of conversation that captures my interest (and finds Peterson most excited to discuss), was his history of playing down and dirty funk in bands in the area such as Cosmic Nirvana, an ensemble where Peterson actually played baritone sax. “I was about 13 years old in the 70s, and everyone wanted that Tower of Power sound,” he said of Cosmic Nirvana and his own next band, the self-led Black Spirit. “We did the prom circuit, high schools. That’s where I did my first transcriptions, but they were all  funk. Truth is, I’m not a jazz baby. I don’t have the kind-of from-the-womb jazz pedigree that a  love of cats have. My story is, I guess, that you can still do something within this music, jazz, even if it wasn’t in your blood or your brain since childbirth.”

Having said that, Peterson met and made his bones in jazz while in college in central New Jersey, Rutgers, hooking up with Terrence Blanchard, Regina Belle, Dave Eubanks during “an extremely fertile period of my life that exposed me to the Atlantic county / Newark jazz circuit.”  Add that to the fact that Peterson’s pop was the mayor of Pleasantville, and younger junior Ralph is pleased to call New Jersey home – even if this is only the second time he was invited to play Exit Zero. “It’s like they say, ‘nobody ignores you like family,” he said with a laugh. “When I am called, I get the ‘homeboy clause.”

By the time he moved to Philly in the 1990s, Peterson had already recorded six albums for Blue Note, in what he calls “a developmental stage” of his jazz education. “Unless I keep growing I die.” Peterson also talks, warmly and humorously, about growing up and playing in a high school marching band while he was still in elementary school. “In 7th grade, I was good enough to be play with the older kids, the motivation of which had nothing to do with them or the music: I could go to all the football games, for free, eat all the hot dogs I wanted, and the girls in high school looked very different from the girls in 7th grade. Whatever keeps you coming back, right?”

Sticking with funk for a second, and what he calls “chasing the vibe of Larry Graham and the Brothers Johnson,” I can’t help but wonder where the funk figures into what he’s pumping into his message of Art Blakey’s good word. “A strong beat is a strong beat is a strong beat is what Art used to tell me,” said Peterson. “Doesn’t matter if its funk, salsa or swing. If it’s strong it’s strong, and the evidence you want is in the audience. If people are moving body parts and bobbing their heads, that’s as good as a standing ovation.”

The gospel of the god groove is not the only thing Blakey taught Peterson.  Ralph was busy “following Terrence Blanchard around when he go the cal to join Art’s band,” said Peterson. “As much as I could get away with it, and pass my classes.”

At the Old Jazz Forum on West Broadway in 1982, Art approached Peterson and tapped him on the shoulder , acknowledging his presence. Introductions were made, and four months went by with Peterson playing in the Walter Davis Quintet. “Art would play uptown and downtown at different clubs in Manhattan, whether it was Sweet Basil’s, the Village Gate,” he said. “One night when Art was playing with Wynton, Marsalis reintroduced me to Art and told Blakey that I should let this fine drumming cat from New Jersey sit in with the band, Art looked at him and looked at me and told Wynton, ‘if he sounds THAT good, why don’t you hire him.”

Hilarious and priceless, Peterson was awed to get the nod from Blakey to sit in, just minutes after Cindy Blackmon had done similar duty. “The bandstand was on fire right? But I learned there that Art had a different plan for me.”

That plan was one where, the next day, Peterson was to report at the rehearsal hall at 2 p.m. sharp. Peterson showed up, 2 p.m. sharp, only to find that Blakey was nowhere in sight. So, the drummer stayed and rehearsed with the band, and – for an entire year – had been stylistically imitating Blakey, with onlookers and listeners calling Peterson, “Baby Boo.”

That same night, right before the actual gig started, Blakey showed up to the club to play, but not before asking Blanchard the most important question a band leader could of his charge: “Was Ralph on time?”

Peterson sat in, luck took over – the intersection of preparation and opportunity – and began playing the ensemble’s signature songs with a Blakey-like beat, all while Art himself listened. “After I played he came up and said, ‘I’ve been waiting for you.’

From that point on, Peterson was a Jazz Messenger, and held that position from 1983 until Blakey passed in 1990. With that place of honor comes a huge sense of responsibility, one that translates into the legacy, literal and figurative.

“The Messenger Legacy came about five years ago when I looked at the possibility of putting together an alumni group. The legacy part comes from the piano playing of Fatai Curtis. He was five or six when Blakey passed away. But, he’s been my sideman, as well as in the band of Donald Harrison and several other Messengers. That’s a no brainer that he’s got a shot. That’s what the Jazz Messengers is supposed to be about – developing young talent and showcasing their wares.”

Peterson remembered that he always felt Art Blakey’s presence, whether when he was around and alive and now that he’s gone. “Art was a friend, mentor, father figure, style coach and so much more, you know? Through example or dealing with you directly, he taught you what to do and not to do. Always. That’s what it meant to be a Jazz Messenger – offering Art a strong level of respect. The older cats did it, and we did it too. In a way, we were all his children. And for that he looked after us, and out us in situations where we had to fend for ourselves.”

Ralph Peterson Jr. and the Messenger Legacy plays the Art Blakey Centennial at Annenberg Center on Saturday, November 16th. Tickets and more information can be found at the venue’s website.