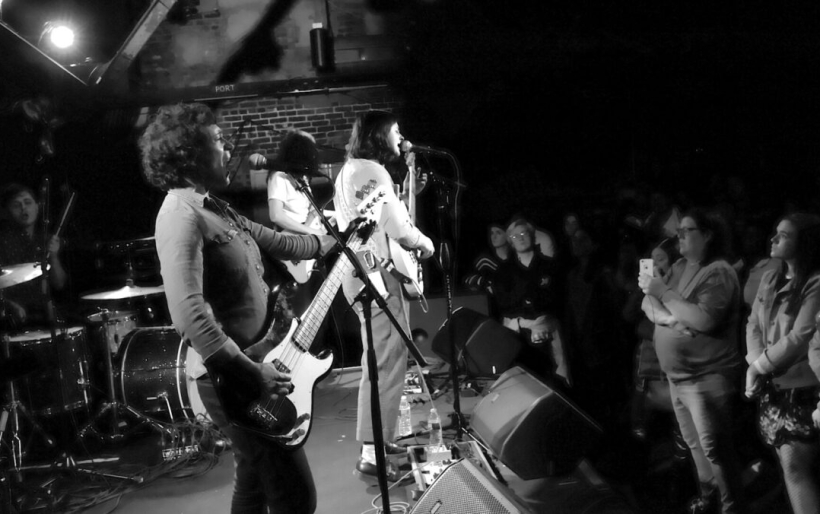 Queen of Jeans | photo by John Vettese for WXPN

Get Lost: Queen of Jeans soars at The Foundry

It was a night of vibes and feelings when Queen of Jeans played a hometown gig at The Foundry of The Fillmore Philadelphia last night, sitting cozily between one-person electronic artist Yumm and sprawling, experimental pop five-piece From Indian Lakes.

The Philly indie favorites connected with their tourmates, the project of California songwriter / composer Joey Vannucchi and his rotating cast of players, two years ago when both opened for Doylestown post-rock outfit Balance and Composure. Though the overlap between their stylings doesn’t immediately check out on paper — from-the-heart rock anthems from QoJ’s Miri Devora and her bandmates, flickering cerebral jams from Vannucchi — in this intimate club setting, they were highly complimentary.

Namely, both QoJ and FIL were easy to immerse yourselves in, whether it be the former’s sky-high guitar chords and emphatic builds to catharsis on songs like “Get Lost,” or the bubbling blacklight pulse of the latter’s In Rainbows-esque jammer “The Monster.” Sometimes the pairings that aren’t the immediately obvious ones work out the best.

For Queen of Jeans’ part, their second hometown gig since releasing this year’s tremendous If You’re Not Afraid, I’m Not Afraid album on Topshelf was a top-notch showcase of the album, touching on eight of its eleven songs, with bandmates Devora, Mattie Glass on guitar, Lou Hanman on bass, and Patrick Wall on drums gelling impeccibly. The album details Devora’s emotional response to a troubling year — one that saw the death of family members and an increasingly maddening world — and you can tell the feelings are still fresh when she flinched a little before launching into the “love will always fuck you over” coda of “Only Obvious to You.” But like the best pop music, the album takes personal lows and transforms them, bringing people together over them…quite literally so when the three bandmates at the front of the stage lovingly huddled around a single mic on “All The Same.”

Opening the night was Yummm, the project of San Francisco’s Matthew Bedrosian, who built songs live out of vocal loops, samples, and keyboard lines (with sounds from the crowd occasionally getting in the mix). It was minimal, but alluring, and made for a lively opening to a night that would later see Bedrosian behind a mixing console, doing live sound for From Indian Lakes.

Check out a gallery of photos from the gig below. The Queen of Jeans / From Indian Lakes tour continues on November 19th at Songbyrd in D.C.; full dates can be found below.