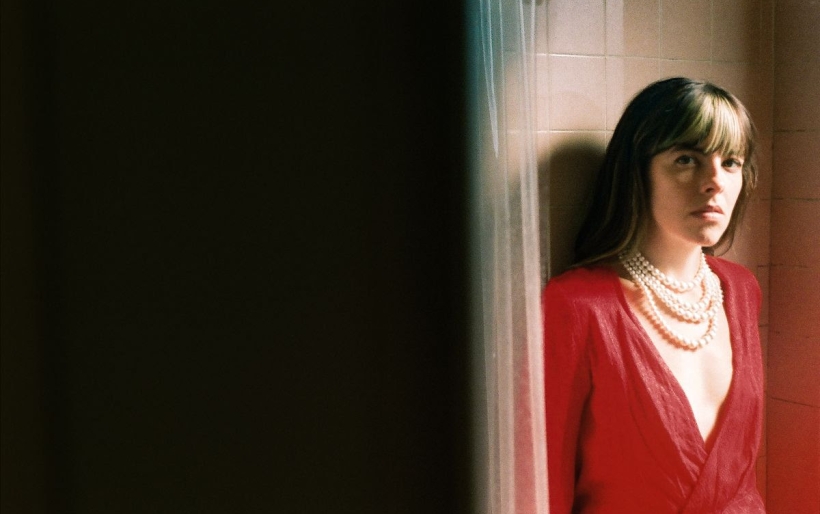 Frances Quinlan | photo by Julia Khorosilov | courtesy of the artist

Ahead of her debut solo album, Likewise, Frances Quinlan has released “Now That I’m Back.” Like previous single “Rare Thing,” this penultimate track of the album omits guitar as the primary instrument and instead has Quinlan singing over a Fender Rhodes, all while painting an unsettling image of isolation and desperation.

The effect is a chilling sense of space, resonating with the lyrics of a slow-burning insanity, beginning with a story pulled straight out of nightmares (but actually coming from Florida). The way Quinlan tells it, a woman is alarmed to find a cockroach had crawled into her ear, and imagines the effect it has on her after its removal. “Afterwards, it dawned on me / I heard noise from every corner, and one night ate Raid-seasoned spaghetti,” she sings as the narrator, haunted by this imagery.

She goes on to describe disconnected scenes, including trucks along a road and Voltaire’s severed head, less telling a story than evoking a sense of anxiety and paranoia. A lo-fi filter brings out the raspiness of her voice, almost as if heard over a landline, until the songs erupts into an electronic dance number. Her voice is then processed with a sheen over it, as she sings “Now that I’m back, we should try again to talk,” before exiting with several chirping synthesizers and drums.

The song is keeping in line with Quinlan’s ability to take a story based in reality, such as in “Somewhere a Judge” and “One That Suits Me,” and get into the heads of those involved, taking some creative liberties to express the anxieties one can feel reading the news. This is, however, a departure from the more indie-rock/emo sensibilities in Hop Along’s Painted Shut and Bark Your Head Off, Dog, and instead hearkens back to the days of Get Disowned‘s fusion of the acoustic and electronic. Check out a visualizer for the song below, featuring one of Quinlan’s watercolors.