Tool brought Fear Inoculum to Philly this week. Here are six takeaways from the show. - WXPN 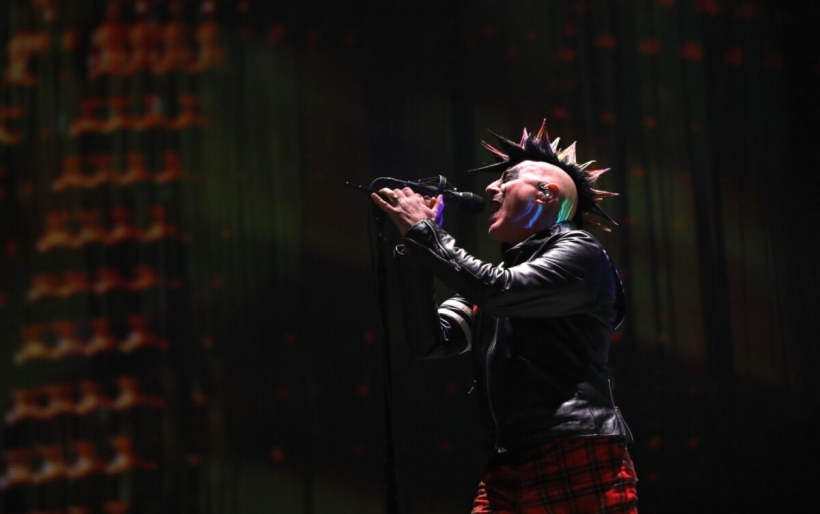 Tool brought Fear Inoculum to Philly this week. Here are six takeaways from the show.

“We’ll be here till the venue is empty,” a security guard assured me as I checked my camera bag after shooting Tool‘s pummeling set opener at Wells Fargo Center last night. “So no need to rush getting back here.”

No need to rush — what an appropriate statement for this gig on so many levels. The California progressive metal icons incubated their new album Fear Inoculum for the better part of the last decade, and this was their first full-band Philly-area concert with new material since playing BB&T Pavilion in 2012. (Their “Tool Music Clinic” instrumental workshop came to the Fillmore last year.)

Listening to the album is not a rushed experience either — for a band that’s always basked in the long simmer of expansive run times and meditative excursions, Fear Inoculum takes it to new extremes, with most tracks seeing what kinds of worlds open up for Tool beyond the 10- to 15-minute mark (the remaining tracks are more interlude-y, clocking in around 2 to 3 minutes).

Even the band’s encore situation last night was not rushed. After the final chords of “Forty Six & 2” rang out and fans recovered from headbanging in the aisles, the band stood at attention for a minute, then stepped offstage while a projected clock appeared, counting down 11 minutes and 55 seconds. Take your time, grab a beer, take a bathroom break, stretch your legs; here’s exactly when we’ll be back. (The encore opened with the 17 minute medley of “Chocolate Chip Trip” and “Invincible,” so likely they needed to cull their energy.)

The show packed the Wells Fargo Center, from the rafters to the politely seated floor (how very grown-up). Here are six things we heard and saw by the end of it.

1. I was not prepared for the level of goth-camp Killing Joke brought to the stage.

The long-running London post-punks opened the show with a hour-long set that was heavy on blistering instrumental arrangements and aesthetic gloom and doom, right down to vocalist Jaz Coleman’s runny eye makeup, frizzled black hair, and constant Nosferatu claw gesticulations. The horror trappings were honestly quite distracting from the band’s music (and their setlist leaned heavy to their early 80s bruisers); instead, it felt like if What We Do In The Shadows had a house band that was not even close to self-aware about their ridiculousness.

2. Tool is still, essentially, three instrumentalists with a vocalist…and the amount of sound they make is unreal.

This didn’t hit me at first; during the 13-minute opening performance of Fear Inoculum‘s title track, I was mostly focused on getting as many pictures as I could. When I returned, the band was vibing their way from “Parabol” into the explosive “Parabola.” But somewhere around “Schism,” it struck me; Maynard James Keenan is singing, and there are only three other people onstage with him. Some backing tracks and sampler bits are employed here and there, but mostly it’s Adam Jones wailing on guitar without much in the way of looping or doubling effects, Justin Chancellor doing the same on bass with even fewer effects, and Danny Carey pummeling his drums. And yet, the fortress of sound these humans create is staggering. If you have no other interest in Tool thematically or artistically, their instrumental chops alone make them worth seeing at least once.

3. Danny Carey’s drumkit is as ridiculous as everybody says, and watching him master it is mesmerizing.

I did not even bother attempting to count how many pieces Danny Carey’s drumkit was last night, because toms were hidden behind other toms, cymbals were stacked atop other cymbals, those aforementioned samplers could be spotted cutting in on the side, some digital vibraphone looking thing spanned the back. It was madness, or at least it seemed like a lot to keep track of, but Carey — clad in an Allen Iverson jersey with his own name swapped in on the back — was up to the task of percussive juggling. And for as much as his kit may seem visually a bit much, Carey’s playing never ventured into excess, with his beats always serving the larger song. Also, two words: gong solo.

4. Fear Inoculum sits perfectly alongside Tool’s back catalog. Perhaps a little too perfectly.

Clearly I’m not the rabid fan that some folks at this gig were, as I had a tough time distinguishing my “Forty Six & 2” from my “Vicarious” from my “Schism” from my “Descending,” at least as far as their opening notes are concerned, whereas pockets of fans all around me screamed intensely the second each song began. That says something about the both the formulaic-ness of Tool’s work — a contention I’ve had to some degree at least going back to 2001’s Lateralus — as well as the nuance that can be uncovered if you hang with their work long enough. And as far as that goes, Fear Inoculum is all the more rewarding when placed in the context of the band’s back-catalog. It can soar like the “Parabol / Parabola” expanse, it can scream like the knuckle-busting ragers “Jambi” and “Swamp Song” (the latter of which dates to Tool’s 1993 debut Undertow and got its first live performance in 12 years last night). It just does it all at a bigger level.

5. Tool remain subversive, sometimes to a fault, sometimes poignantly so.

Tool is a band that historically has a contentious relationship with its fans, with the idea of being celebrities, with society as a whole. They’re not ones to suffer what they deem bullshit gladly. But they’re also not ones to tell you directly what they think; they tend to lean cryptic, leaving it up to the listener to determine whether they’re being literal, offering commentary, or commenting on the idea of commentary. Sometimes they’re mocking, sometimes they’re scathing, and sometimes a cigar is just a cigar. So when I was handed a photo laminate with the sloganized line “A timeless example of the dangers presented by Toxic Masculinity” and a silhouette of soldiers raising the flag at Iwo Jima, it was like, hmm. Is this a micro-critique of the military (a frequent theme in Tool’s work) or of the heavy music scene? Is it ridiculing the phrase “toxic masculinity” as a post-#MeToo internet buzzword — a terribly strange look but not an unsurprising one, considering that Keenan was in 2017 accused of sexual assault, and his denial of the charges was framed kind of dismissively. Is it somehow more complex? And why am I spending so much time thinking about a clumsy statement that a limited audience saw?

The more effective bit of Tool subversiveness happened just before their final song of the night. The concert had been a strict no-phone zone, to the point that Wells Fargo Center staff was roving the crowd, picking audience members who were trying to snap a picture or two for their Instagram, and threatening to eject them. “Okay, Philly, has something been burning a hole in your pocket all night?” Keenan asked. “You need to take a picture? Need to send an email? Okay, last song. Take ’em out. Security, stand down.”

A fair way to balance the nagging impulses of our ultra-connected society with the desirous ideal of spending two hours at a concert just being in the moment, together. The song they went into, though: “Stinkfist,” one of biggest commercial hits that 23 years ago directly delves into how desensitized the world had become to sex and violence. At the same time, it was impossible to hear Keenan howl about “constant overstimulation,” how “It’s not enough, I need more” and “I don’t want it, I just need it,” and not think of the ridiculous amount of screen time each of us logs per week, and how it’s never enough. Making this connection while capturing a favorite song performed by a favorite band is a clever path to understanding.

6. The band may be bleak and abrasive, but their ability to uplift is astonishing.

On the surface, Tool can be big and bad and scary. Some of this is satirical; some of it (the flickering, frenzied world of their macabre video backdrops, made under Jones’ art direction) is legitimate nightmare fuel. But the band’s juxtaposition between sonic and visual brutality with sensitive, soaring vocals from Keenan has always made it clear that Tool was oriented in a cautiously hopeful direction. Last night might not have left us with the “create something positive” marching orders we got at the same venue 18 years ago when Tool played Lataralus to an on-edge crowd in the wake of 9-11. But the sense of powerful catharsis it left us with was the same.

Check out photos from the gig and a setlist below.