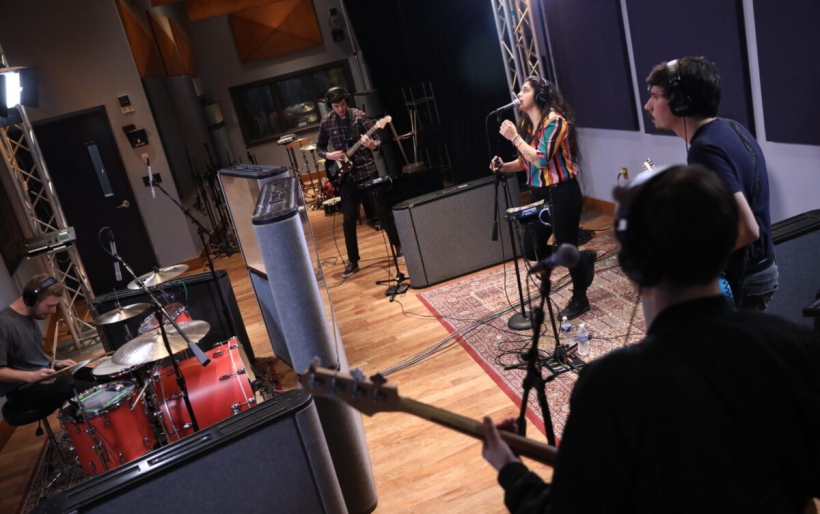 You can tell how much the close proximity to Philadelphia’s music community has influenced New Jersey indie five-piece Sweet Pill.

Its chiming, interlocking guitar licks take a page out of Algernon Cadwalader’s emo playbook. Frontperson Zayna Youssef’s soaring, searing vocals are indebted to the cathartic power of Mannequin Pussy’s Marisa Dabice. And for some of their inspirations, the band is thinking even bigger.

“I mean, you’ve listened to Paramore, right?” laughs Youssef, reminiscing about reactions Sweet Pill has gotten from listeners who want to merely align it with the DIY underground. That’s an area where the band excels, for certain — many of its members, including guitarist Jayce Williams, are players in 4333 Collective, an indie promotions group that puts on sick shows at Glassboro’s Rowan University and reminds us a bit of R5 circa 2000. But there is no denying the formidable presence and charisma the band has — particularly Youssef, rocking the mic and stomping around center stage, working up a sweat and barely stopping to catch her breath — nor is there any denying the expansive possibilities of their sound to grow into something massive.

It’s been just over eight months since Sweet Pill released their debut single, “Doubt.” The Lost In It EP followed in mid-April, with songs detailing toxic relationships, personal uncertainties, and the drive to find a way through turbulent times. The band has been gigging hard at Rowan, in Philly, and beyond. It’s about to release a new single via Know Hope Records — the punchy, hooky “Miss This,” backed with the sprinting “Tell Me.” On December 13th, Sweet Pill wraps the year on an awesome lineup at Glassboro’s Chamberlain Student Center Ballroom, opening for an acoustic Tigers Jaw set, and a solo Oso Oso performance.

This week in WXPN studios, Sweet Pill — which is rounded out by guitarist Jack Meidel, bassist and vocalist Tom Papaccio, and drummer Chris Kearney — rocked a five song set that touches on Lost In It, showcases the “Miss This” single, and debuts a new jawn that, for now, is just called “New Jawn.” “It’s about frustration, being frustrated with somebody,” says Youssef. “It’s about punching a hole in the drywall as a solution to something.”

Watch Sweet Pill play “Best of Me” below, stream the entire studio session via Soundcloud, and get tickets and more information on their December 13h show here, via 4333 Collective.