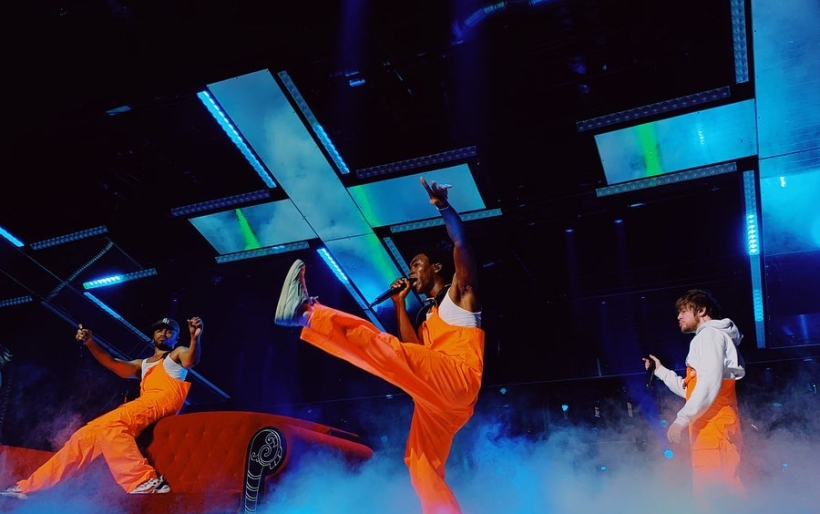 Brockhampton | photo by Sammy Kutza | photo courtesy of the artist

Brockhampton’s formation, movement, and unparalleled charisma shine at the Fillmore

BROCKHAMPTON — the powerhouse of a rap collective, the “greatest boy band to ever live” — is an eclectic, untenable force, and on Wednesday night, they showed The Fillmore that heaven belongs to us.

Their Heaven Belongs To You Tour featured two equally as intense opening acts. The experimental duo 100 Gecs honestly could have gotten a writeup all on their own. They’re weirdly stunning, and must be taken completely seriously. Their lyrics might seem laughable, but when you take a minute to really sit on what they’re saying, they hit kind of hard. Consisting of (occasional) guitarist and vocalist Laura Les and Dylan Brady, they released their debut LP 1000 Gecs in May of 2019 via Dog Show Records, and it deserves to be talked about. Their set included crowd favorites “money machine,” “ringtone,” and “800db cloud.” This was my first live experience with them, and I completely loved their bizarre, off-kilter vibe.

Incredibly UK-based rapper slowthai followed, and his narrative-style rap songs dripped with Britishisms and completely offset 100 Gecs in a perfect way. Relatively new to the scene, his debut LP Nothing Great About Britain was released in 2019 via Method Records. Slowthai runs in the same vein as another recent Philly visitor, JPEGMAFIA, with his uncensored social criticisms and heavily produced soundscapes. His set also featured an a capella cover of BROCKHAMPTON’s “HEAVEN BELONGS TO YOU.”

When the lights finally cut for the headliner, the stage was lit with a simple, neon cross that extended out from the ceiling to bathe the whole stage in white light, playing nicely on the tour’s heavenly theme. There’s really one word for BROCKHAMPTON: powerful. Everything about this show somehow felt equal parts chaotic and choreographed. The six touring members took the stage one by one in lineup formation, decked out in neon orange jumpsuits. Though they’re a collective, each member feels like they play different, impenetrable roles:

Kevin Abstract serves as the focal point, and also has one of the most successful solo careers of all the other members.

JOBA is unpredictable and has the ability to seamlessly shift between heavy rap verses and beautiful a capella solos.

Bearface holds down the alto and tenor sections.

Merlyn Wood is the chaos, hands down.

Don McLennon is the unarguable foundation to tracks like “ST. PERCY.”

Their latest studio LP, GINGER, via RCA Records, was the main focus of the setlist. They opened the night with “ST. PERCY,” and immediately transitioned into “IF YOU PRAY RIGHT,” two of the album’s  unsuspectingly powerful builds. They wanted to ease us into their inevitable high-energy. These first two songs were incredibly toned down, with each member kneeling at the front of the stage and passing off verses. Something about that alone gave me chills. The simplicity of the stage design, which featured a ramp and bursting smoke cannons, was the background to this reverent introduction. The underlying build, the tension that these songs held, immediately exploded into “ZIPPER” off Saturation III.

When BROCKHAMPTON picks up, they can not come down, and neither can you. The feeling behind “GOLD,” “HOTTIE,” and “BOOGIE,” all from Saturation II and III, is completely unparalleled. It’s all about formation and movement. When they aren’t sitting still for ballads like “SUGAR,” Merlyn and JOBA are literally leaping across the stage, absolutely bouncing with energy, all while maintaining this state of controlled, choreographed chaos. However they’ve capitalized on this oxymoron, it’s working. You will feel like you’re the one bursting at the seams watching them perform. A BROCKHAMPTON concert is a shared experience between you and them; if you aren’t screaming ‘HONEY’ back at them, you’re at the wrong show.

Above all else — the impeccable lyricism, the high-energy, the chills-inducing visuals — BROCKHAMPTON know how to deliver a super intimate concert experience. That might seem impossible, considering they sold out every square inch of The Fillmore, but it’s true. They encourage the crowd to open up and then collide with each other (safely), and be in the moment with each other. The message of this entire tour is that heaven belongs to you, and the one takeaway they pray you carry with you after you leave is that there is no room for exclusivity when you’re in the same room as them. Everyone has a place there, and they’ll spend all 19 songs of their set making sure you feel wanted just as much as they do.

That is how you put on a show.

BROCKHAMPTON continues the Heaven Belongs To You Tour tonight in Toronto, Canada, and tomorrow in Detroit, Michigan.