Free at Noon Flashback: Son Little says hello and goodbye with a taste of Aloha - WXPN 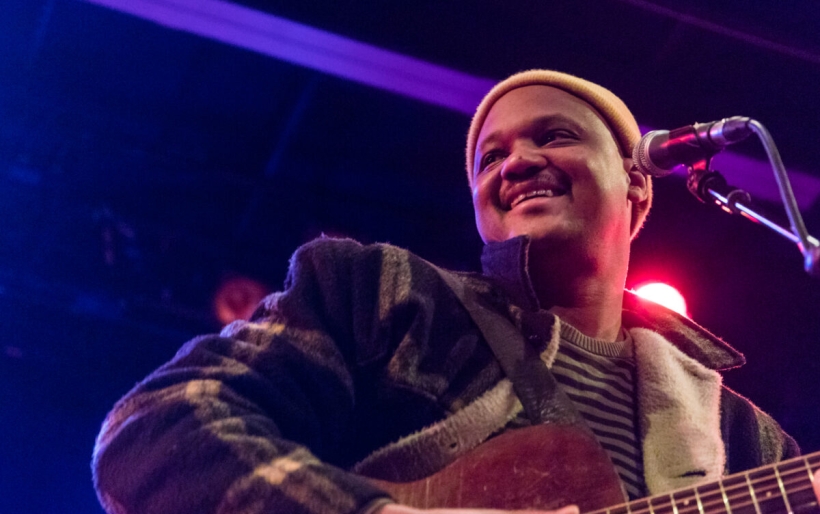 Free at Noon Flashback: Son Little says hello and goodbye with a taste of Aloha

Aaron Livingston had a sort of surprise when he stepped to the World Café Live stage this afternoon for a Free at Noon concert. Although the singer-songwriter and guitarist, better known by his nom-de-stage Son Little, is on a long tour leading up to the release of his third album aloha, he began the set in a sort of looking back mode, strumming his acoustic guitar loosely, fervently, and singing lyrics that sounded vaguely familiar.

When he got to the hook, “walk me to the river, darling,” it became clear – Son Little was opening the set with a very transformed, minimal version of his electronic-blues-rock hit “The River,” to the crowd’s delight once the moment of realization kicked in.

From here, Son Little kept it lowkey and acoustic, leading into the new album’s lead single “Hey Rose,” and then into the quiet-as-a-mouse guitar licks and gentle vocals of “I’m A Builder” from his Invincible EP, released earlier this year.

Clearly an appreciator of how to command a space as just a single human, Livingston gave a shoutout to his tourmate and Free at Noon bill-mate Christopher Paul Stelling. “How does he do all those things?” he mused.

But as we saw in the pensive, politically-minded “Suffer,” Son Little doesn’t need all those things to get everyone to stop chatting, stop drinking, stop breathing practically; he just needs an empathetic message out of Marvin Gaye’s What’s Going On and a sweet, scratchy, soaring voice delivering it, and everybody is locked in.

Son Little closed today’s Free at Noon performance with “Mad About You” from his 2017 album New Magic, followed by “About Her. Again” from Aloha, which is out January 31st on Anti- Records; get more information on the album here. For more on tonight’s concert with Stelling at World Café Live, consult the XPN Concert Calendar.