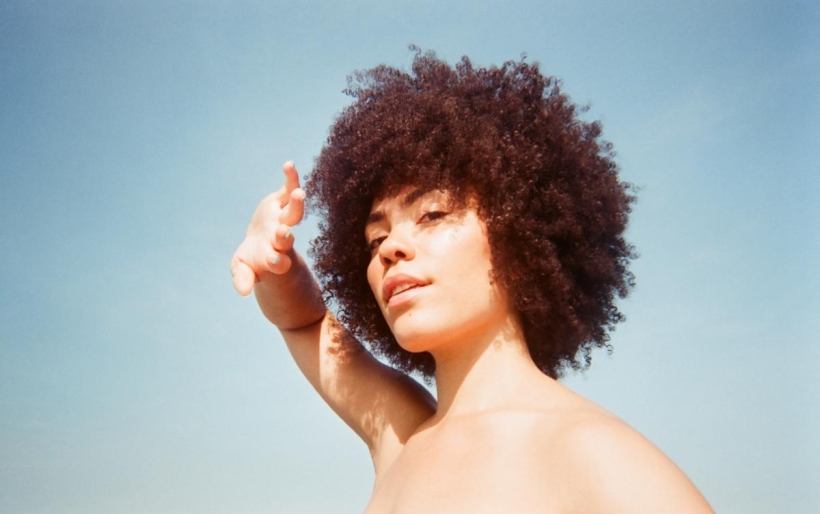 Madison McFerrin | photo by Kylah Benes-Trapp | courtesy of the artist

Building Sound, Finding Strength, and Staying True to Yourself: A conversation with Madison McFerrin

Madison McFerrin has a voice that can quiet down a room in an instant.

The Brooklyn-based singer-songwriter and sound artist did that during a performance this past winter at The Lounge at World Cafe Live. With a set that fell between the high-energy jams of Great Time and the interdisciplinary mix of kinetic dance and etheral pop delivered by Kingsley Ibeneche, McFerrin’s set could have been merely a mellow bridge. But the way she constructed songs with only her voice and a looper pedal drew the crowd in; this was beautiful, it was captivating, and there was also an urgency to it.

In contrast to other sound loop artists who spend extensive time building before the getting to the payoff, McFerrin moves quickly and directly to the point, delivering gripping songs that touch on personal topics like emotional turbulence and self-doubt — “Shine” was preceded by a candid story about how a televised performance of “The Star Spangled Banner” in 2016 fell prey to technical difficulties, resulting in caustic cyberbullying that shook her confidence — as well as socially-critical topics like “Can You See,” which confronts police brutality.

The message is a key force, but so is the music, and McFerrin comes from a remarkably musical family. Her father is a cappella / jazz vocalist Bobby McFerrin, best known for his massive 1988 pop hit “Don’t Worry, Be Happy.” Her grandfather Robert McFerrin Sr. was the first black man to perform with the Metropolitan Opera in New York. Madison’s strength as a vocalist is certainly an extension of that lineage, but she takes it in her own direction. That’s the fascinating thing about the McFerrins — there’s a sense of heritage, but everyone has their own lane, right down to brother Taylor making waves as a future soul producer and collaborator on his younger sister’s newest projet, You + I, which releases tomorrow on Bandcamp.

Madison lived in Philadelphia from 2001 until she graduated from Germantown Friends High School in 2010; her family had spent time in Minneapolis and San Francisco prior to that, but she returns to town this week for a headlining set at MilkBoy. When we caught up via phone last month, our conversation began with McFerrin’s memories of Philadelphia and its influence on her work.

MM: I think one thing that Philly really opened me up to was that there was a lot more cultural diversity than in Minneapolis, and I was very grateful for that. Particularly the school that I went to at the time, GFS, was focused on having not only racial diversity but economic diversity, so I was able to really grow up with people from all over, people from different spectrums. And that’s always incredibly inspiring, because you’re not in a homogenous situation.

I think also, there’s so much soul in Philadelphia. That’s very apparent, even when you’re just visiting. The musical history of Philadelphia is incredibly inspiring, and I try to bring that soulfulness with me wherever I go.

TK: You’re based in Brooklyn now. What led you up there; was it college?

MM: No, I went to college in Boston, and then New York seemed like the natural migration in terms of being a musician and where you want to go.

TK: You’re from a super musical family, but it seems like everybody takes music down their own route. Could you could talk about that process of following in footsteps while also creating a path for yourself?

MM: It comes down to honoring what’s true to you. I think a lot of that also comes from my grandfather grew up in one era, my dad grew up in another. My brother Taylor is is ten and a half years older than me, so he was more entrenched in 90s hip-hop. It really comes down to your environment. I grew up listening to a lot of top 40 pop radio; Britney Spears and N*Sync were definitely high on my list of favorite things to listen to when I was 11 and 12.

So all those things help shape who you are, and so they are obviously ties between all of us, because we are all of the same DNA and same lineage. My dad was playing a lot of jazz music and African music when I was growing up, there was always James Brown playing. So you’re going to have those connections and those ties, but we are all our own individual people who grew up in our own settings. So I think that’s just going to be what happens inherently to develop your own thing. And I think my dad also, he really wanted to encourage us to find our own voices and find our own musical styles, so it was important for us to do that.

TK: To what extent did you feel pressure to do stuff with music coming from that background? Did you ever consider “I don’t want to do music, I want to do this instead”?

MM: I never considered not doing music; that was always the plan. But I definitely struggled to try and figure out what exactly my path looked like within that world. But I think that’s just a natural thing for anyone growing up.

TK: At the top of this year, you released a remix project based on the a cappella music you’ve put out going back to 2016. Do you think a cappella lends itself better to remixing by nature, or does it feel strange to you to have a song that you built up so intentionally disassembled and reimagined?

MM: I always felt that a cappella stuff lent itself to be remixed because it was just vocals and you could do whatever else you wanted around it. That was part of why I was interested in having people remix my stuff: I wanted to hear what other people heard behind my voice. Other than just my voice.

TK: And when you’re building up the song yourself, you’re kind of creating those other elements – the rhythmic and melodic things that are not your lead vocal. Do you still hear them as your voice, or do you imagine “this could be a piano part, this could be a bit of a percussion thing going on.”

TK: When I saw you play the song “Shine” at World Café Live, you introduced it with a story about the time you sang the national anthem and things went awry, and how that experience led to you writing the song. Those events happened in 2016. Two and a half years later, what is your relationship to it when you play it?

MM: I always really enjoy it. People really love it, it’s probably my favorite part of the evening in the shows that I do. I travel all around the world and people end up singing that song with me, and it’s a really beautiful experience. I’m super grateful for the song and everything that has come from it. A lot of people don’t know the story, so it’s a fun story to tell. I get less and less embarrassed by the moment every time, to the point of being not embarrassed at all, and it’s a nice conversation starter. I’ve got a great relationship with “Shine.”

TK: It takes something that was a low, and makes it empowering – not only for yourself, but for other folks as well.

MM: With the music I write – I’m writing what I see around me, and the things I’m experiencing myself. And I think, particularly in this day and age, it’s hard not to write about these issues that are incredibly pressing [as part of that]. And it’s not exclusive to American society; you see all these protests breaking out around the globe because of unrest that’s happening between the haves and have-nots.

It’s important as artists to be able to reflect what’s happening, not just in our personal lives, but also on a global scale if possible. Because the other thing about being an artist and just being a human in general is we all have these feelings, we all have these emotions, and they’re not exclusively our own. There is no emotion that anybody is feeling for the first time. So for us to express ourselves as artists, we’re actually giving voices to people who feel the same things but might not be able to have the outlet, or the voice, or the language to do so.

TK: You + I is the first thing you’ve done as Madison McFerrin that is not a cappella. Did you work with your brother Taylor on the whole project, or was it just those singles?

TK: Can you contrast what it’s like making music as an a cappella artist, where you have total control over what the piece is like, versus something that’s more collaborative, like when you worked with Taylor?

MM: I think that it’s helpful to have somebody else to bounce ideas off of. At the same time, it’s one of those things where it can be difficult communicating exactly what you want because I might not have all of the language from a technical standpoint of how to use the equipment. And if anything, I’ve been in groups and all these other things – creating music collaboratively is not foreign to me.

But I’m still going to be performing these songs solo. Yesterday I was on the radio, it was a live thing, and part of my Ableton stopped working properly, so I had to completely scrap the song I’d been planning on doing. Versus, I haven’t had as many issues with just my one loop pedal not going through any other systems. So the bigger adjustment is the performance aspect of it, versus the actual music making process.

TK: Why did you choose for this — working with Taylor, and fleshing out your sound beyond a cappella and looping — to be the next step you’re taking with your sound?

MM: Oh, it was supposed to be the first step I was taking. It was initially the first step, and I put out the a cappella stuff to get some buzz while I was waiting for Taylor to finish his album, and that took off more than I was anticipating. So the a cappella thing was totally a fluke, but I think it happened the way that it was supposed to, because now I’ve really made a name for myself as a vocalist [that] I think people will trust… they’ll know at least that they’ll get some good vocals, regardless of the music surrounding it.

At the end of the day, I want to be known for my harmony, and that’s going to be true regardless of if it’s a cappella or if there’s production behind it. This just seemed to me like…because of the fact that I wasn’t intending to do a cappella music, I really wanted to take that next step to show what else I was capable of.

TK: You’ve released singles, and EPs; You + I is going to be an EP. Do you see an album in your future, or do you think albums are even necessary in 2019 when you can do so much song by song, or short project by short project?

The music industry is changing incredibly rapidly. It’s a different industry than when I put out my first EP three years ago. So just keeping track of all of that and what is the best mode of putting out music., it’s an ongoing question. But I would like to put out a larger body of work in the future, in the not so distant future.

Madison McFerrin plays MilkBoy on Friday, December 6th with Max Swan and Kingsley Ibeneche; tickets and more information on the show can be found at the XPN Concert Calendar.