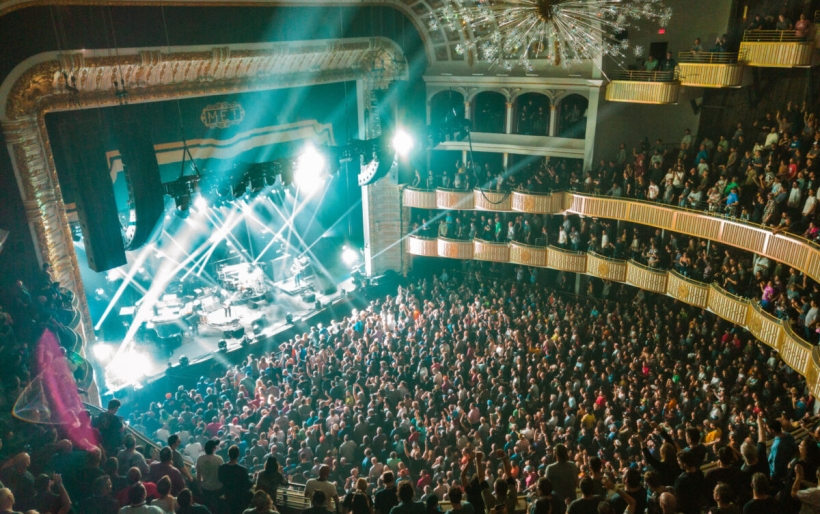 The community of Phish finds a home at The Met Philly

There’s a long line of eager Phish fans on Broad Street opposite The Met. They’re here to see the storied jam band play for one of their smallest crowds in nearly 20 years. Rumor is that they’re going to take the stage at 8:15 tonight. I get my press credentials moments before 8 p.m., move through security as quickly as I can, and as I walk through the door I’m overcome with an excited, nearly nervous feeling. It’s as if I’m reunited with old friends and everyone around me is just as happy to see me. I’m no longer here to observe objectively as a member of the media. I’ve transformed into a part of the Phish community. I’m here to see Trey, Mike, Page and Fish for a modest 20th time.

The energy in the lobby of The Met is palpable. Tickets for tonight’s show were only available to SiriusXM subscribers and the exclusivity of the event is visible from the collective smile found in every direction. The lights drop and a roar comes from the theater. Shortly thereafter, the crowd is quiet so to hear the band open with “Hello My Baby” a capella, the first time performed by the band in ten years. But who’s keeping track anyway? I’m caught squeezing onto the elevator to the fourth-floor mezzanine, where a guy is asking if anyone has a place for him to stay tonight, or at least park his Jetta. He traveled all the way from Oregon. No one on the elevator necessarily balks at his question, but the door opens and I don’t have time to waste. I step out as I hear someone behind me say, “Welcome to Philadelphia.” I’d like to think he found a home for the night.

The band kicks into “Tweezer” on my way to being ushered to stage right. I’m happy with this spot because, you know, Page side rage side. There’s a group of guys probably at least ten years my senior already in the mezzanine box, but they’re welcoming, pointing out that they moved their chairs against the wall to create ample dancing space. This is the sort of community that’s unparalleled at Phish shows: all I did was arrive, and they basically said, “Join us,” no questions asked.

The jam band scene is often associated with concertgoers and fans focused on good vibes and free love. Some people find it off-putting, ingenuine and even corny, but I, as someone that’s unafraid to attend concerts on his own, find comfort in it. Oftentimes brief exchanges with strangers can appear to be trivial. But for some, it may be memorable, as if lending a helping hand along a long journey. It brings me back to Northerly Island in Chicago in 2013. A friend had to give up his tickets to the shows that July because of some complications where he worked. I flew to Illinois myself because I just didn’t have it in me to get rid of my tickets.

The first night a storm came in off Lake Michigan and Phish’s second set was cut off just as Trey was starting “Prince Caspian.” The venue was evacuated, the crowd forced to leave and I had to walk a full mile to my hotel in what is still the heaviest rain I’ve ever been caught in. The following night Phish played a third set to make up for the one cancelled the night prior. While stuck on a street corner because busses were delayed, a couple was also waiting at that corner for a bus to the show. They managed to hail, what seemed to be, the only cab in Chicago (the wait for the bus was that long). They invited to ride with them and I obliged. We made small talk on the way there, but I lost them in the fray of the crowd trying to get through security, eager to see that night’s three-set show. I couldn’t find them the rest of the night and Phish opened with the song that was left unfinished. I’ve never been so happy to hear Trey sing “Oh, to be Prince Caspian/ Afloat upon the waves” as that evening.

Back at The Met, Phish just finished “Blaze On,” a funky crowd favorite from 2016’s Big Boat, and the 3,500-person capacity room nearly exploded with energy. It created a vibe that this was truly a special night for the Philly Phish community. There was a brief pause on stage before they brought the energy down a notch with their classic cover of ZZ Top’s “Jesus Just Left Chicago.” Right away I thought of my close friend that introduced me to Phish in high school. I always associate this song with riding around in his parent’s maroon Nissan Altima playing Slip, Stitch and Pass, a live album with my favorite version of “Jesus Just Left Chicago.” Those were formative moments in my musical discovery and analysis of how the band jams. We nerded out about Trey’s guitar tone. We talked about how the band transitions perfectly from “Lawn Boy” into “Weekapaug Groove.”

Phish fans are known for their attention detail, and probably to a fault. The stats we keep are excessive, there’s no denying it (just take a gander through phish.net sometime). At more than one point on Tuesday I noticed the crowd seemed to have undivided attention on the band. It was refreshing to go to a show and actually observe how few people had their face in a cell phone. Maybe that’s a generational characteristic of the Phish crowd. Throughout the night, some of the older heads in my area of the mezzanine called others out for being on their phone. And, yeah, I was one of them that got called out. But it was only a couple brief moments to take notes for this article, I swear (plus, I lost my pen somewhere between security and finding my seat, rendering my notebook useless).

Since Phish has been around since the early 1980’s I often find myself in the middle-to-younger end of the age spectrum at their shows, even at the ripe age of 31. But I’m fine with that. If you’re able to have a good time and be positive in this crowd, anyone can make it at a Phish show. During the intermission I discuss the first set with Ross, who chose to keep his last name out of this piece. Tonight’s his 112th Phish show and somewhere between 40th and 50th for his friend at his side. Ross shares a story about a parking lot party getting broken up at his first show at the Spectrum in 1994. The three of us laugh about it and it’s as if we arrived to the show from the start.

Then there’s the partying throughout the Phish community, nay, the jam band scene. Suffice it to say, the Phish fanbase doesn’t have reservations towards a good time. And while we’re not keeping the same tabs on the parties around each show, it’s the generosity and tight-knit memories that make Phishheads together. After all that, I can assure the community will agree that “Tweezer” five times on Tuesday was a total blast.