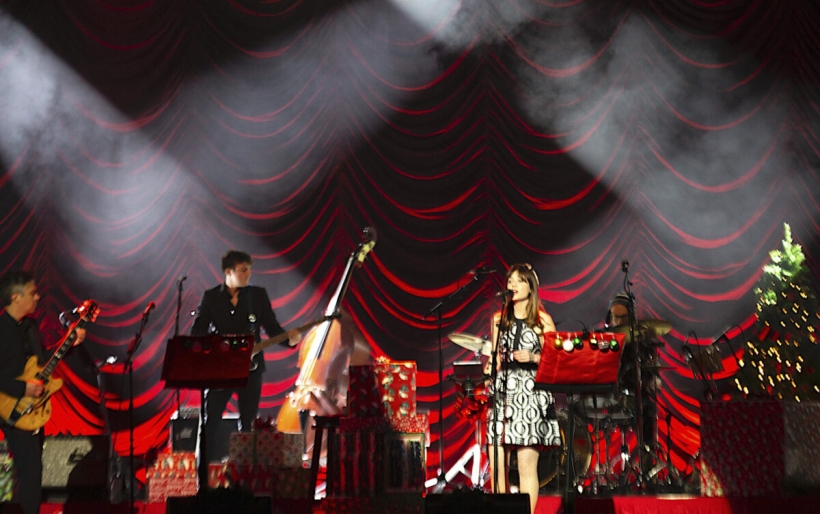 She & Him | photo by Rachel Barrish for WXPN

She & Him go a-Christmas-caroling, with weird results, at The Met

Though she will forever be beloved as television’s New Girl and one of 21st Century cinema’s great romantic soul crushers (500 Days of Summer), it is probably best, for the purposes of this review, to remember the Zooey Deschanel of Elf, where she played a somewhat obnoxious and occasionally fumbling hipster department store Santa’s assistant with Will Ferrell.

Now fuse that image with her personae / job as the deadpan, yet endearing vocalist of She & Him, her winsomely nostalgic duo with singer-songwriter M. Ward, and you’re coming very close to the oddity of Wednesday night’s Christmas show at The Met –  a gig also meant to celebrate that grand North Broad Street venue’s one year anniversary.

Not as if we’re reviewing the opera palace, but, The Met looked great for the holiday season with its dramatic lobby lighting casting shadows across Christmas ferns.  Considering that The Met officially opened, last year, with the one-two punch of Bob Dylan’s opening night performance and John Legend’s ho-ho-ho holiday showcase (on December 4, 2018, no less), perhaps we can expect that every Met anniversary celebration will come Christmas music themed.  That’s great.  Holiday music is awesome. Once appropriated by the Broadway and Tin Pan Alley masters of popular song — e.g. Irving Berlin, Frank Loesser, Sammy Cahn and Jule Styne — the Christmas music of olde took on more sophisticated melodic signatures of melancholy and sensuality to go with its religious themes and the nicely merry and bright by the time the likes of Brian Wilson’s Beach Boys and Phil Spector’s Wall of Sound crew were involved.

All of these sounds and schemes, on record, have worked wonders for She & Him and their Les Paul / Mary Ford-inspired take on the classics. Heck, they even have several Christmas albums to their name. Somehow, though, on a cold rainy Wednesday night at The Met, all of the seemingly natural elements that usually make She & Him purr…didn’t.

That’s right. I’m the Grinch who gets to give a Christmas concert a lousy review. Maybe, blame the fact that it was the very first night of their holiday music tour (Zooey did), and the singer’s often-noted nervousness on stage, but, from the very start of the show and the slap back delay of the Mel Tormé-penned classic “The Christmas Song (Chestnuts Roasting on an Open Fire),” Ward and Deschanel never seemed exactly in synch. It was as if Ward was having a different show at a different pace than Deschanel, tapping his feet to some hidden beat, as she shuffled her legs to another groove. Trust me, I paid hard attention to the way their limbs moved – She & Him were off.

As the duo and their backing band (including a too-loud-for-the-mix organ player, and messily arranged background vocalists) moved forward from that auspicious beginning into the hokey holiday bop of the Beach Boys’ “Christmas Day” and Brenda Lee’s “Rockin’ Around the Christmas Tree,” things seemed even more disjointed, almost as if they had never ever rehearsed these tunes before hitting The Met stage.

Charged with running the visuals of old Christmas music sleeves and vintage photographs, Deschanel even botched those up. Funny thing was, Deschanel sort-of apologized for the screw-ups, asking the audience if we were all OK with the muck-ups, as she was OK with them.

Only the oddly rhythmic “Mele Kalikimaka” — a Bing Crosby & The Andrews Sisters bit of holiday kitsch– and the non-Christmas themed Ronettes’ cover “I Can Hear Music” worked without wonk or blunder, with Deschanel’s vibrato in full effect, and Ward’s timing closer to ‘on’ than ‘off.’ For the record, his guitar always sounded great, wet with delicious quick flitting licks as conversational asides. And her deadpan vocals were in fine fettle. The pair just wasn’t having the same conversation.

So, OK, this was not the perfect She & Him holiday showcase. But, at the very least, Deschanel was charming as she discussed her and her family’s long Philadelphia roots, she made a hell-of-a-co-emcee for its mid-show ‘Best Holiday Outfit” contest, and — when she and Ward were on cue and working together — made for one fun holiday treat. Just not a musical one.