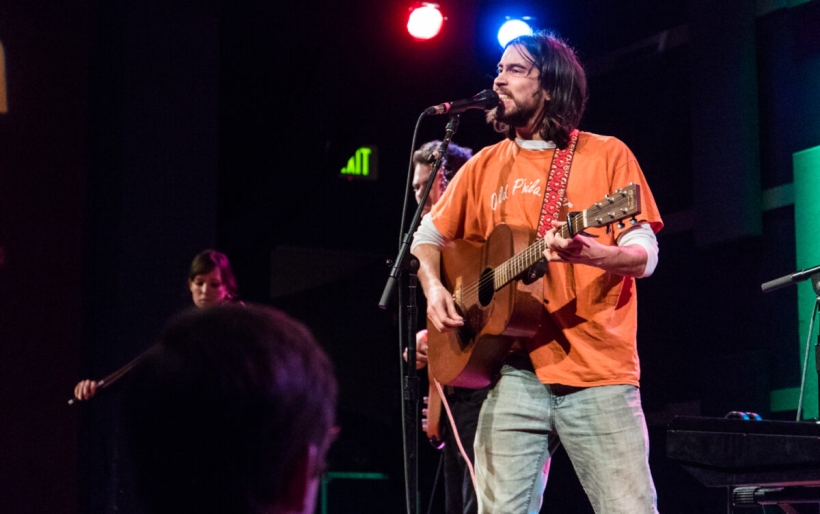 After a sold-out Union Transfer show last weekend, (Sandy) Alex G greeted a smaller but no less enthusiastic audience this afternoon at World Cafe Live. The prolific musician has released eight studio albums in the past decade, most recently House of Sugar just a few months ago. After wrapping its touring for the year, the local band is back in town for the holidays and came ready to celebrate with the hometown crowd.

Alex Giannascoli has been writing songs since he was a kid growing up in the Philly suburbs, so he has plenty of material to draw from. His longer headlining set last week allowed more room for older songs, but today the songwriter and his four-piece backing band focused on new tunes, kicking off the set with House of Sugar singles like “Gretel,” “Southern Sky,” and “Hope.”

After playing acoustic guitar for the first half of the set, Giannascoli switched over to keys for the next four songs, and tossed in older tunes “Sportstar” and “Mis.” Joined by violinist Molly Germer at several points throughout the set, (Sandy) Alex G’s songs mix acoustic and folkish elements with explosive and electrified bursts. (The Fader probably put it best when they described the range of Alex G’s music as “country-adjacent acoustic songs, noise assaults, lounge music excursions, grunge riffs, and pitch-shifted experiments” when he was their cover star earlier this year.)

Not quite ready to leave the stage after a half-hour set, Alex G and the band indulged the audience in a four-song encore, playing some fan favorites like “Harvey,” “Boy” and “Brite Boy.” Revisit today’s set in the photos below.