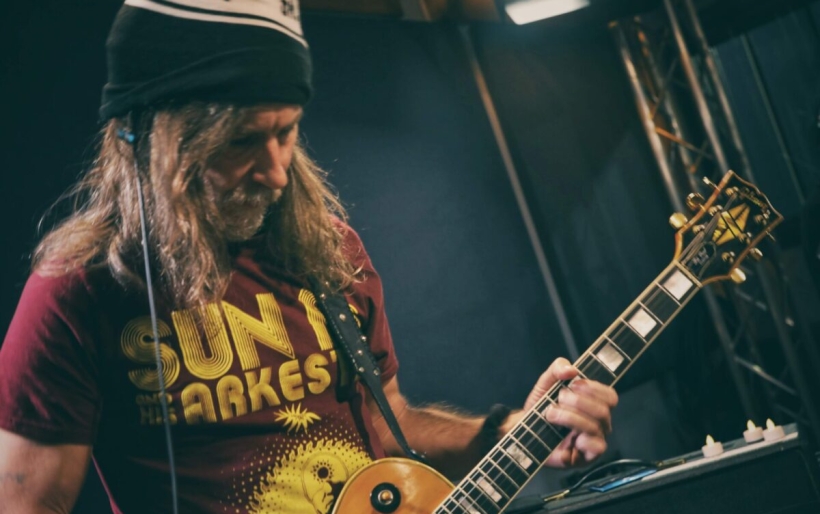 Joining us for this Indie Rock Hit Parade live session is perhaps the heaviest band to ever visit our studio. Currently celebrating their 15th year as a band, Vancouver’s Black Mountain have long been favorites among guitar-freaks, metal-heads and psych-kooks alike. Drawing inspiration from early progressive rock as much as electronic drones, Black Mountain’s new fifth album, Destroyer, is a showcase of the band’s influences and musical flexibility.

Wasting no time, our session begins with the thunderous “Future Shade,” which also serves as the album’s opener and lead single. Featuring everything you’d want out of a Black Mountain song, the track thrums with analog synth textures and rousing vocals. Next is “Horns Arising,” which McBean described as his favorite new song to play live. It’s easy to see why: kicking off with a lumbering riff, the song’s first vocals come not from McBean or Fannan but from Schmidt (by way of a vocoder). The song shifts gears partway through, with a delicate acoustic figure serving as temporary cover before the full-band fury returns.

The band continues their descent with “FD 72,” a swirling bit of psychedelia that shows off Black Mountain’s (slightly) softer side. As hinted by its cryptic title, the track is truly a ‘fantastic dream.’ Finally there’s “Licensed to Drive,” which the band was very gracious to play by my request. Another multi-part composition, the band bides their time until Bulgasem bashes out a white-line rhythm and the rest of the band kicks things into the highest gear they can handle.

Listen to Black Mountain’s Indie Rock Hit Parade session below and check out John Vettese’s photos from the studio: