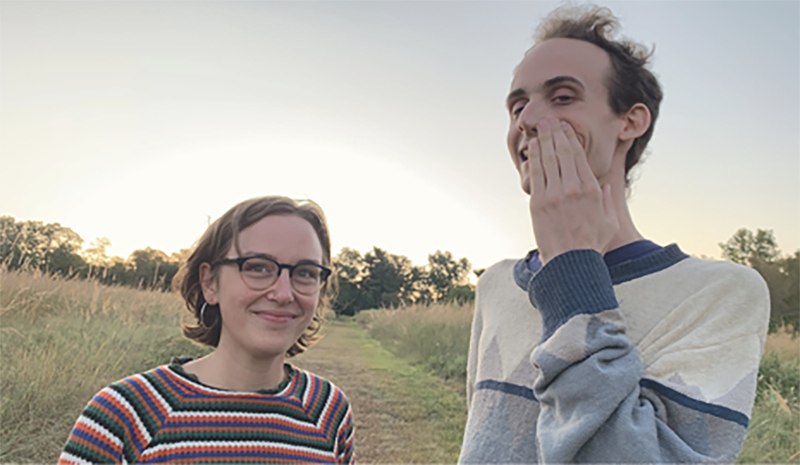 Soupy and ther | photo courtesy of the artist

Earlier this fall, local singer-songwriters Tabitha Ahnert (Soupy) and Heather Jones (ther) shared some of their most memorable recordings to date. Ahnert has now released music as Soupy both solo and in a trio, and Jones has been releasing music with ther since 2015. ther (pronounced with a “soft th” and “short e”) also currently includes members of two other local acts, Mother Moses and Amelia Cry Til I Die. Last month, the two friends Jones and Ahnert performed several shows together throughout the Northeast, including at Bee Side Fest in Albany, NY. Jones will also play a solo set as ther tonight at The Pharmacy.

Both of the new releases from ther and Soupy look at apocalypse, both internal and shared, but they reject grandeur in order to focus on intimacy and friendship. Soupy’s Bandcamp page labels their new release Heavy, “songs about the end of the world and things that feel like it.”

On Heavy, no single production approach dominates, except that Ahnert keeps their voice as close to us possible, singing into either a USB microphone or a cell phone. According to Ahnert, “this was my first time doing any self-recording / digital composition, i had a good time learning (~: .” The songwriter’s experimental instincts shine through on several of these new tracks, especially when they overdub their own voice. Every once in a while, sweet vocals stacked in many layers all ripple together in harmony, like on “Blue,” or collide with one another and tumble away, like at the end of “Mirror.”

On the other hand, “Heavy home,” “Sunlight” and “Sleepwalking” are welcome returns to the standard format of solo voice and acoustic guitar, where Ahnert also sounds stellar. And “Worth keeping” is one of Soupy’s most compelling songs yet – it features the same mix of honesty and originality that sounded so fresh on their debut EP Practice from earlier in 2019. As “Worth keeping” builds toward catharsis, Ahnert cries out, “I can’t help but give myself away to anyone who asks me. But you never asked me.”

ther conjures up a similar atmosphere on their two new tracks – shifting sounds, uncertain selves and exposed voices, all up close. Jones describes their project as “songs about being trans, and a doubtful Christian, at the end of all things,” and humbly calls this release just two more songs. Throughout the two new tracks, “pale horse” and “maureen,” Jones remains attentive to God, demons, angels and death, who all get mixed up together inside the city’s smallest rooms. The standout ballad “maureen” describes an elderly woman in distress, within what might be a retirement home, or a hospital, or a psychiatric ward, and the song’s climax finds Jones wondering, “If I float away, will I ever be found?”

The sounds on two more songs come from a variety of disparate recording environments (“at 3 different studios in philadelphia and a barn in new jersey,” according to Jones) so we rarely hear the same kind of sound twice. Jones’ lead vocals sit upon a mysterious bed of synths, electric bass, and clean guitar; when a hissing drum machine enters on “pale horse,” the mystery grows deepest.

Heather Jones mastered both of these new releases at So Big Auditory in Philadelphia. two more songs is ther’s third cassette release of 2019, following nonultrajoy from March and a split with local collaborators Sadurn from January; Heavy follows Soupy’s debut EP Practice from June. ther plays tonight at The Pharmacy with Florry, So Sensitive and Swim Camp.