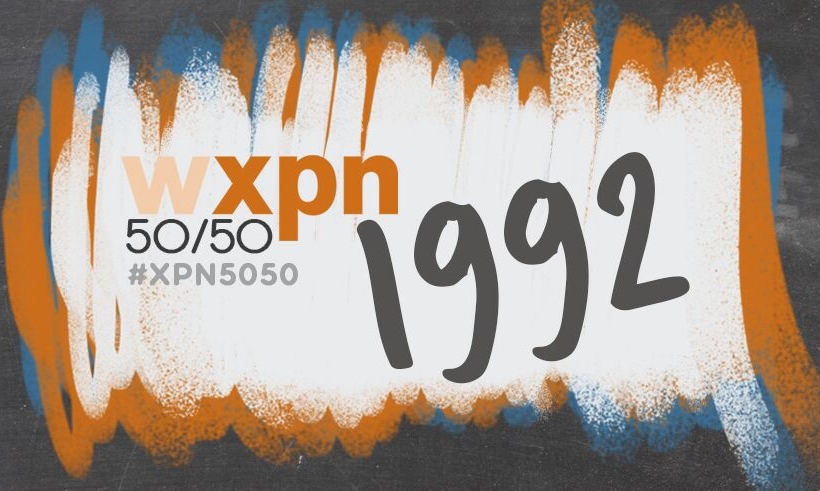 For fifty weeks this year, we’re celebrating the music of a specific year every Saturday on WXPN. We’ll be choosing the years randomly; for this week’s #XPN5050, Eric Schuman is putting the musical spotlight on the year 1989.

The “alternative” era was in full swing in 1992, and though the previous year saw breakthroughs from Seattle-its Nirvana, Pearl Jam, Soundgarden and the like, 1992 was the year the scene stretched more broadly outside the Pacific Northwest.

Iconic albums like Little Earthquakes by Tori Amos, Check Your Head by Beastie Boys, Dry by P.J. Harvey, and Slanted and Enchanted by Pavement hit the shelves, when those shelves were mostly stocked with CDs in longboxes. The year also saw two Bruce Springsteen releases — Lucky Town and Human Touch — folkternative breakouts from Lemonheads (It’s a Shame About Ray), Blind Melon (their self-titled record), Juliana Hatfield (Hey Babe) and Suzanne Vega (99.9F°), and the conscious hip-hop of Arrested Development on 3 Years 5 Months and 2 Days in the Life Of….

On television in 1992, a couple major shows ended their run — The Golden Girls being one, Growing Pains being another, MacGeyver being another still — but the debuts were jam packed. Martin, Melrose Place, Mad About You, Batman: The Animated Series, Barney, X-Men, Renegade, and Hangin’ With Mr. Cooper.

On the big screen, Aladdin took us to a whole new world, A League of Their Own taught us that there’s no crying in baseball, Batman Returns took the D.C. hero in a dark and distressed direction, Reservoir Dogs pushed the boundaries of violence and blunt brutality. The courtroom showed up in scenes both dramatic (A Few Good Men) and comedic (My Cousin Vinny). And who could forget their horrifying image from Alien 3?