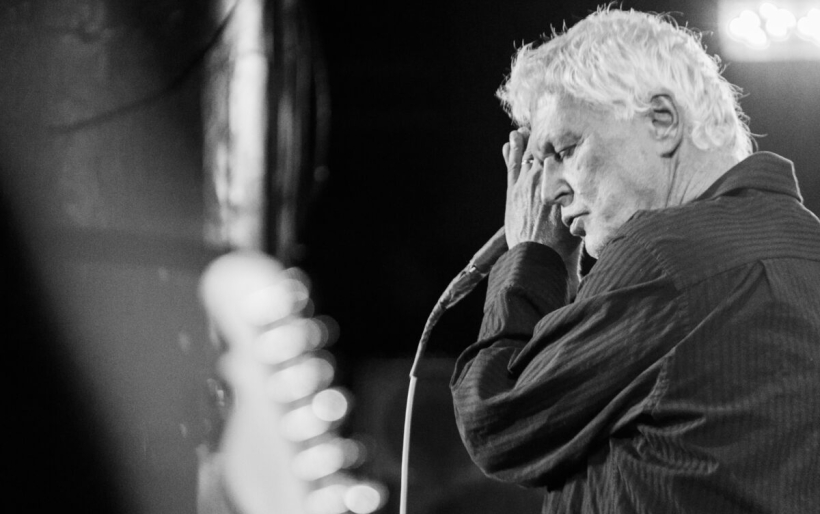 Guided By Voices | photo by Jamie Stow for WXPN

Guided By Voices threw down on a sold out Friday night at Underground Arts to promote their new record, Sweating The Plague, the third they’ve put out this year. Bob Pollard and his crew, with over a hundred albums under their belt, put on a marathon three hour set with songs both old and new.

Bob Pollard is the Jim Jones of indie rock. You can’t not drink the kool-aid when the greatest cult band of all time is sweating melodies over thirty-five years of Miller Lite bottles and unforgettable songs. The early parts of the set were peppered with classic GBV hits such as “Things That I Will Keep” and “Don’t Stop Now,” along with songs from Zeppelin Over China and Warp And Woof (did I mention Guided By Voices have put out three records this year?).

Between touring and releasing records at an extraordinary pace (the band reportately records songs in their van on tour), GBV never lacks substance. After a rousing performance of the Liberty Bell-referencing “Echos Myron” (during which Uncle Bob noted, “it’s right here”), the band continued to crank out power-pop magic (Zeppelin Over China’s “The Rally Boys” is a new classic).

Pollard isn’t known to be the best editor, but that is in no way a jab; it is unfiltered musical honesty coming from indie rock’s most prolific mind. The hooks spill out of GBV like a busted can of PBR and the best ones always seem pulled from the ether. Pollard also gave a shout-out to the recently deceased Ric Ocasek, who produced 2001’s Isolation Drills before jumping into “Chasing Heather Crazy.”

The set continued with cuts from all across their three decade plus catalogue. The crowd was popping up and down to “Back To The Lake” from Universal Truths and Cycles then singing along to Alien Lanes’ “A Salty Salute.” Songs such as Mag Earwig’s “Jane Of The Waking Universe” could have been the finale of any other band’s setlist; for Guided By Voices, it was a halfway point. The band still had so many aces up their collective sleeve; from “Glad Girls” to “I Am A Scientist” with at least fifteen songs sandwiched between them.

It was an all-killer encore: “Teenage FBI,” “Gold Star For Robot Boy,” “Space Gun,” and a ton more leading up to and ending with a rousing “Game Of Pricks.” The cult leaders from Dayton, Ohio, came into Philadelphia with a mission: bring people together with a shared love of their music. Everyone is everyone’s best friend at a Guided By Voices show, and this kool-aid will make you feel like you can live forever.