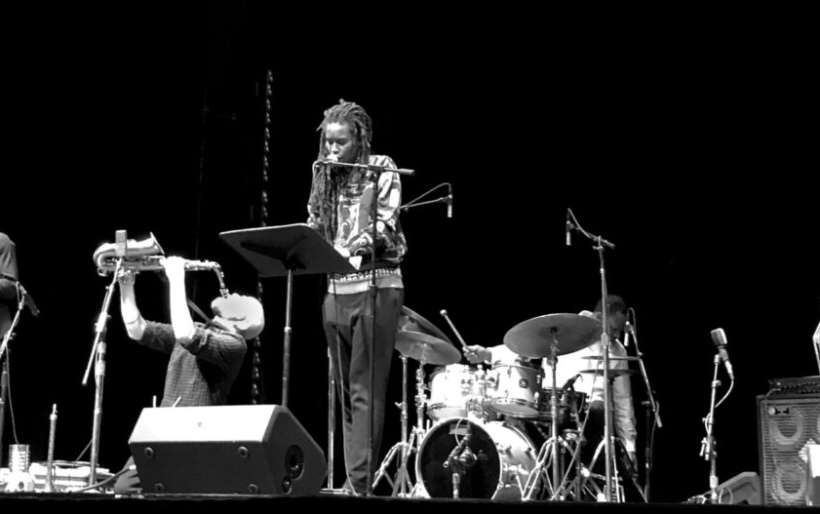 There’s some kind of magic that propels Irreversible Entanglements — one that keeps the band unconsciously in tune with one another, and intensely focused on the troubled world around them.

The east coast free-jazz collective — led by Philly sax player Keir Neuringer and poet Camae Ayewa, aka Moor Mother, and featuring trumpeter Aquiles Navarro, bassist Luke Stewart, and drummer Tcheser Holmes — makes emotive, explosive sounds that draw on a sense of collective unrest, outrage, and frustration with a society built on racism and inequality, as well as a desire to see that society grow into a more harmonious place. But they do it without an excess in planning or overthought; rather, their recordings and performances are impulse-driven gut reactions, in-the-moment expressions of truth, and the new song they released today follows in step.

“Homeless / Global” is Irreversible Entanglements’ first release since its 2017 debut record, and builds up over the course of 23 searing minutes that consist of breathtaking, brutal saxophone leads, mournful trumpet drones, and a nervy rhythm. Over the fray, Ayewa ruminates, states and repeats indelible phrases and images: “The truth will do you no good here” — “babies yearning for sleep, but can’t find their way” — “the sound of eyes looking up at me, asking all these questions, hungry eyes” — and most powerfully, most poignant to the state of the world as the second decade of the 21st century draws to a close, “they say freedom’s down the road if we could just hold on.”

In a description on Bandcamp, Irreversible Entanglements shares that “Homeless / Global” did come together spontaneously in the studio.

As with the session for our first album, we began this session by just setting studio levels and hitting that record button. Homeless/Global was the first thing we played, no script, no plan. It’s a studio take that reflects what we do live: take the stage without a map, navigate the world in deep, telepathic, contrapuntal communion with each other and the histories we’re tapping into, push into the known and unknown, and arrive at the end together.

The band is getting ready to release its second full length album in the spring, though it isn’t exactly clear if “Homeless / Global” will be on it; the band refers to it as a “standalone ‘single’ that foreshadows” the record. Listen below, and see Irreversible Entanglements perform a free concert next Wednesday, December 18th, at the Kimmel Center’s Sittin’ In series; more information can be found here.