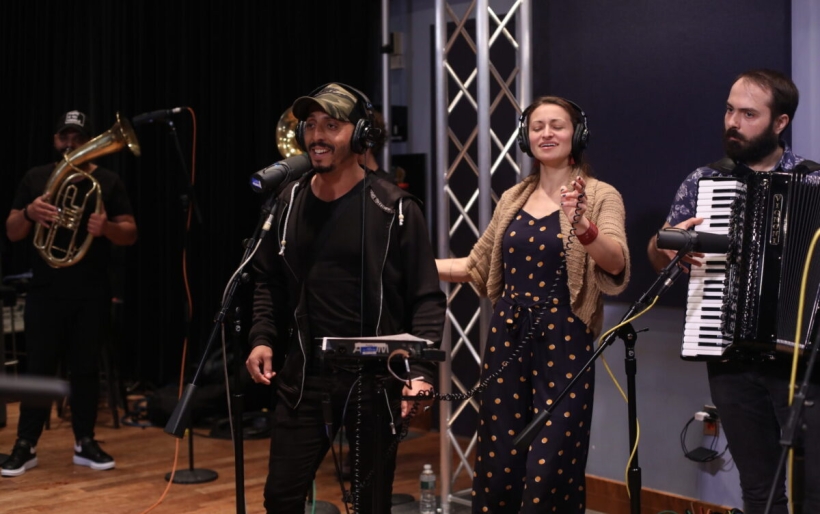 On a Thursday evening this spring, over 20 musicians packed into the WXPN performance studio, at least half of them carrying horns. It was the famed West Philadelphia Orchestra, but not just them; the city’s premiere Balkan brass band brought their friends and tourmates in Dzambo Agusevi Orchestra along for the ride, and what ensued was a rare and magical (and LOUD) collaboration.

WPO has been making noise from points along the Baltimore Avenue corridor for over 15 years; it plays Eastern European folk and dance music, informed by the bandmates’ various backgrounds in experimental jazz, art-rock, and punk. They’re a Philly institution, and very unique to the section of Philly they hail from. It’s not uncommon to wander into a community event in Cedar Park or Spruce Hill and find WPO leading an impromptu parade of young and old, marching and moving to their infectious and expansive sounds. Outside of West Philly, the Orchestra has made a name for throwdowns like their long-running, high-energy Get Your Brass Upstairs party.

Like WPO, Dzambo Agusevi Orchestra appreciates a good brass-related slogan: theirs is “Brasses for the Masses.” The ten-piece band from Strumica, Macedonia has built up a substantial following from regular touring around Europe over the past five years. Under the direction of their namesake, 32-year-old lead trumpter Dzambo Agusevi, they play museums, festivals, piazzas, and parties, and infuse their high-energy take on their homeland’s regional music with disco and funk rhythms and textures, making a timeless style feel very contemporary.

The tour that had Dzambo and WPO pair up was their second visit to North America, and their first on the east coast. The day after they recorded in WXPN studios, they performed under the stars and nearby a bonfire in the backyard of Germantown’s Rigby Mansion. XPN’s David Dye was in attendance, and he dubbed it “the most ecstatic party I’ve been to in decades.” You can feel some of that heat in this studio session performance, opening with a collaboration on the standard “Ibrahim,” where WPO vocalist Petia Zamfirova trades off on vocals with Dzambo’s tupan player Orfej Chakalovski while a sea of horns fanfares around them. From there, the two bands tackled an instrumental take on the Macedonian pop tune “Kes Kes” by Julia Bikova. Then we heard aan untitled cut from Dzambo, which got Zamfirova and her bandmates dancing along the perimeter of the studio.

Watch video below via NPR Music’s Live Sessions, and listen to a Soundcloud archive of the entire set. West Philadelphia Orchestra rings in 2020 at Underground Arts with Taylor Kelly and Johnny Showcase; tickets and more information can be found at the XPN Concert Calendar.