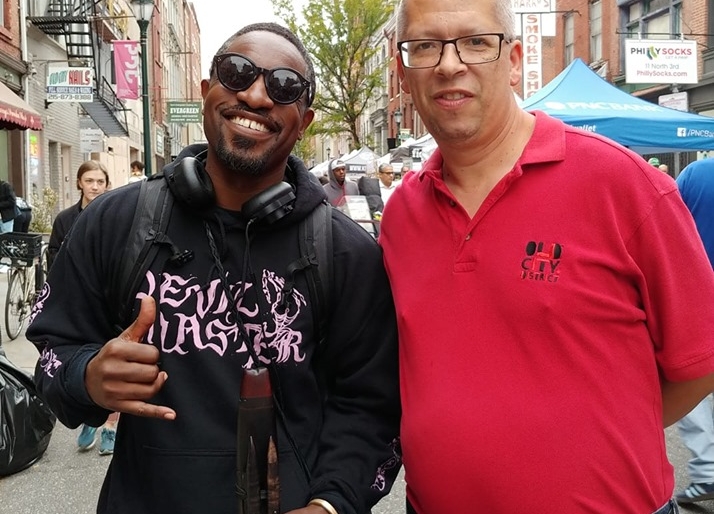 The Key’s Year-End Mania: Koof Ibi Umoren’s top 5 instruments to walk around the city with like André 3000

Year-End Mania is the Key’s annual survey of the things below the surface that made 2019 incredible. In this edition, our writer and photographer Koof Ibi Umoren has some musical suggestions for you to live out your Andre3000 dreams.

Early this summer, we all heard the rumors. Modern folklore about our favorite rapper’s favorite rapper galavanting the streets of Philadelphia. We all thought it must be a lie. Why would Three Stacks just be walking around our city like a person? Internet comments amounted to an unconvinced, “Pics or it didn’t happen.” We put on our shoes, and patiently waited by our smartphones, ready to bolt out the door to where ever social media directed us.

Then the pictures started coming in. From Cherry Street Pier, to Rittenhouse Square, to the Chinatown Mid-Autumn Festival, and always pictured with this hand-crafted Mayan Double Flute made by Guillermo Martinez. Internet research and subsequent Jason Segel sightings informed us of the real reason for the visit. Multi-instrumentalist, rapper, singer, songwriter, producer, dancer, show creator, and fashion icon André Benjamin, and his friend Jason, were filming a television series.

Dre is no stranger to learning new musical instruments while out on location. In 2017, while filming High Life in Germany and Poland, he was said to have learned clarinet over the course of production. This lead to the Mother’s Day 2018 release ofLook Ma, No Hands, a 17-minute improvised duet featuring James Blake on piano and André on bass clarinet, and Me & My (To Bury Your Parents).

Since filming for Dispatches from Elsewhere (which I don’t care about unless it features at least one full episode of André 3000 playing his Mesoamerican flute on the Art Museum steps) has reportedly wrapped up in November, our city needs a local hero to step up and claim the role of wandering Philadelphia with an obscure and esoteric musical instrument. Here are my recommendations of instruments to play while roaming the streets of Philadelphia to make yourself feel like 3,000 bucks.

What: The kalimba is a traditionally Eastern and Southern African instrument perfect for poly-rhythmic strolling. Played with the thumbs and occasionally index fingers, it’s essentially a fidget spinner allowing for conscious or unconscious music making. Simple kalimbas can have as few as three notes or range up to five octaves of plucked metal tines producing sound, a technology that would be borrowed, mechanized, and miniaturized to create the first music boxes. Playing the instrument can be intentional and musical or mindlessly mechanical, turning a long walk into a meditative walking lullaby. You may also like the Marimbol, a larger version of the Mbira played while sitting on it.

Where: Listen to this version of “Me & My”played using only a kalimba and conceptualized during a rainy walk down Baltimore Avenue to the Woodlands Cemetery.

A companion to an upcoming piece written on assignment for #WXPN the Key. A cover of @andre3000 “Me & My” played on #kalimba, and an original for walking down Baltimore Ave in the rain.

What: In the same family as André’s Double Flute but much more accessible is Recorder. Popularized in the Renaissance Era (producing the first extant books describing the recorder) and fixed in the Baroque (tapering and detachable segments allowed for better tuning and transportation), one of my biggest pet peeves is when people perceive the instrument as a toy for children. Composer and educator Carl Off utilized the instrument for early musical education in his Orff-Schulwerk program because of it’s relative ease of playing and inexpensiveness compared to classical, orchestral instruments. There are full recorder ensembles that use soprano, alto, tenor, bass, great bass, contrabass, sub-great bass, and sub-contrabass recorded  to perform some mind-blowing arrangements. Just this year producer turned blockbuster movie composer, Ludwig Gorannson, decided to use these instruments heavily as the titular characters motif instrument in the Disney+ show The Mandalorian.

Where: Perhaps a museum tour, Pied Piper-ing people down Benjamin Franklin Parkway. I can think of few things cuter than hearing the Rocky theme played on the recorder while tourist reenact the running of the stairs.

What: Maracas aren’t normally seen as a solo instrument. Their usual uses include adding textural accompaniment to Latin percussion sections or satiating crying babies with an easily grip-able noisemaker. Again, not to be confused with a toy instrument, maracas can be utilized in very musical ways. They can be played very similarly to the sticks on a snare drum but with the added bonus of chorus (multiple tiny beans all hitting at slightly different times), rebound attacks (three note for two strokes because of bounce back), and that quintessential rattlesnake sound. A virtuosic player can create full, one-man songs, complete with clave played with the handles, bass drum stomped out on the floor, and whistled or sung melodic accompaniment. If you can find Francois Zayas walking around Philadelphia, ask him for a demonstration.

Where: Can be relegated to only the hands, or you can get your whole body into it and salsa dance down the median on Broad Street.

What: I became aware of this instrument through Ximena Violante of Philadelphia’s own Interminable. Ximena has become a pillar in the city, performing in the group Mexico Beyond Mariachi and bringing regional Mexican musics like Son Jarocho to our ears. Interminable’s current project, which I had the pleasure of photographing, involves the inclusion of the Afro-Mexican instrument known as Quijada de Burro, or Donkey Jaw — literally a dried, fleshless lower mandible of a donkey, horse or mule. When the tissue is all cleaned out, the teeth are naturally loosen within the jawbone and rattle when shaken or struck. The Ramus, the flatter part behind the molars, is hit with the fist and a stick is rubbed against the teeth. Similarly to the maracas, solo performances should be no problem for you virtuoso jawboners.

Where: I figure the best place in the city to acquire the jaw of a beast of burden is in the Italian Market. There is also a vegan option made by Sinuhe Padilla.

What: The melodica is an attempt by German accordion and harmonica manufacturer Hohner to continue to sell accordion-like music to the masses. The instrument has gained it’s most recent fame by being the traveling instrument of choice for The Late Show with Stephen Colbert bandleader Jon Batiste. Invented in the 1950s, it goes by many names. “Harmonaboard” (Harmonic + Keyboard) – Jon Batiste. “Face Piano” – Stephen Colbert. “Pianarmonicordion” – Koof Ibi Umoren. Lacking the hammers, tines and strings of a piano, it’s more of a horn-like melodic instrument, using air blowing through reeds to create the sound. It was built to be mobile like the accordion but without the accompanying weight of the left-hand bass. Melodicas are mainly made out of plastic to be durable and easily transportable.

“That’s really how I learned to play it, just carrying it everywhere I went.” – Jon Batise

Where: Anywhere! My previous Year End Mania entries will steer you in the right direction. 2017. 2018.