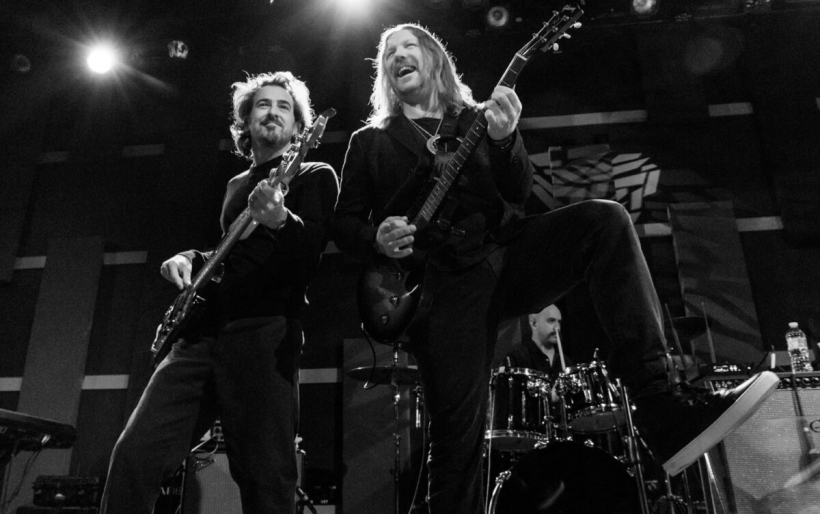 The Allman Betts Band | photo by Jamie Stow for WXPN

This year, the offspring of classic Southern rockers The Allman Brothers Band carried the torch into their generation. Devon Allman, son of Gregg Allman, and Duane Betts, son of Dickey Betts, founded The Allman Betts Band last November, and released their debut LP, Down to the River, back in June. With the band making its Philadelphia debut tonight at The Met, opening for fellow Allman Brothers affiliates Gov’t Mule, it stopped by WXPN this afternoon to warm up for the show with an expansive Free at Noon concert from the World Cafe Live stage.

Opening with the rousing punch of “All Night” and “Shinin'” — the same two songs that open the album — Allman and Betts traded off on licks and vocals throughout the set, backed ably by bassist Berry Oakley Jr. (another Allman Brothers offspring), guitarist Johnny Stachela and percussionists R. Scott Bryan and John Lum. On “Autumn Breeze,” the energy went mellow and midtempo, for an organ-led expanse that blew up into a firey conclusion. On “Melodies Are Memories,” the band juxtaposed cowboy twang with a reggae beat.

Allman Betts also dropped two covers into their set: “You Got Lucky,” originally heard on Tom Petty and the Heartbreakers’ Long After Dark, and a country-soul take on the iconic “Purple Rain” by Prince. On the title track for the album, the band brought the energy down to a whisper, prompting the sold-out crowd to sing along “Just go down to the river now” as they slowly brought the volume back up.

Despite the good vibes, the band did get booed when Allman engaged some sports smack talk, expressing support for the New York Giants, who take on the Eagles this Sunday. “Come on,” he said. “I’m from Texas! I had to rib you a bit.” When Betts chimed in to say “They’re turning on us,” Allman conceded “May the best team win.”

As the clock neared the top of the hour, making this one of the longest Free At Noon sets in recent memory, the band launched into a long jam on the album closer “Long Gone,” letting it burn into the 1:00 hour. Check out photos from Free at Noon and listen back to the performance below, and get tickets and more information on tonight’s Met Philly show at the XPN Concert Calendar.

The Allman Betts Band 12.27.2019
Setlist
All Night
Shinin’
Autumn Breeze
Melodies Are Memories
You Got Lucky
Down to the River
Purple Rain
Long Gone
Related Content
View All Related Content