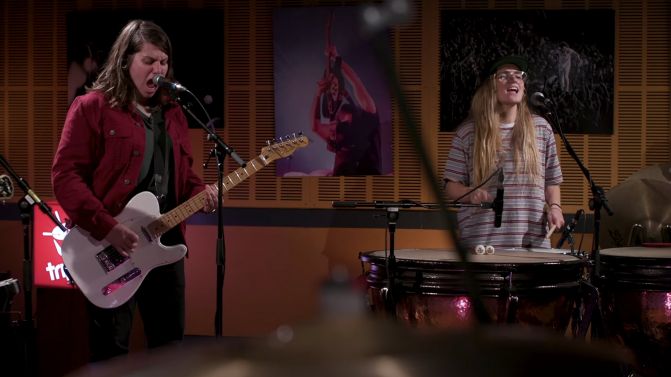 Year-End Mania is the Key’s annual survey of the things below the surface that made 2019 incredible. In this edition, Key writer Tyler Asay talks about his favorite cover songs of the year.

Cover songs: everyone’s doing them! Whether it’s a tiny town’s smallest bar band to the world’s biggest artists, every person who has ever played music started out by performing the work of musician they admire. The art of the cover song is interesting; there is something about a certain artist performing a certain cover that says something about their career on a grander scale. Here are my picks, in no particular order, for the best cover songs of 2019.

No one has had a crazier past couple years than Lucy Dacus. After putting out her critical breakthrough Historian in 2018, she followed it up last year by putting together the supergroup boygenius with Phoebe Bridgers and Julian Baker. You’d think the Richmond, VA, singer-songwriter would want to take a break in 2019.

But no! Dacus spent this time releasing carefully planned covers on certain holidays over the course of the year, the best of which came out on my favorite holiday: Bruce Springsteen’s birthday. Lucy’s cut of “Dancing In The Dark” brims with joy and an appreciation of The Boss’s work while containing the underlying sadness that drives the original.

Alex Lahey – “Welcome To The Black Parade” (My Chemical Romance)

This list is also an excuse for me to talk about some of my favorite records of the year! Alex Lahey’s The Best Of Luck Club was arguably the best power-pop album of 2019. The Australian singer-songwriter took the opportunity to stop by Triple J to deliver a powerful and faithful rendition (while backed by a 7 piece band) of My Chemical Romance’s beloved “Welcome To The Black Parade.”

Did Alex Lahey cause the MCR reunion? Her performance of “Welcome To The Black Parade” on Triple J happened almost exactly two weeks to the day that it was announced that the emo legends would be reuniting for some LA shows for the first time since 2013. Gerard Way even said that the cover gave him “chills.” MCR truthers, you have Alex Lahey to thank.

This list is also an excuse to talk about some of my favorite TV of the year: nothing truly moved me on Television more than David Lindeloff’s “remix” of Alan Moore’s cult graphic novel Watchmen on HBO. Taking place 30 years after the original story with a new cast of characters (all led by the incredible Regina King who deserves all of the awards for this performance), this season was scored by the great Trent Reznor & Atticus Ross, arguably the most important soundtrack composers of the decade.

Reznor & Ross’s take on David Bowie’s classic asks the titular question with soft piano chords. Instrumental versions on “Life Of Mars?” have been done before, but something about the way that the bass comes thumping in with the chorus shows a misdirection: Life hasn’t been on Mars this whole time, but it’s been somewhere else.

What is “Dirt Emo?” Ruston Kelly would define the genre as “a grungy emotional attitude soaked in an Americana / folk tradition.” What’s interesting, is that in the company of classic emo bands like Dashboard Confessional and Saves The Day, Kelly made the decision to include Taylor Swift on his Dirt Emo Vol. 1 covers comp as well.

It speaks to both Ruston and Taylor: a journeyman Nashville songwriter who just stepped into the spotlight last year, and a pop superstar who’s been diverting the people’s expectations since she was 16. But “All Too Well” is where they meet, exactly where “dirt emo” is defined: emotional storytelling and an incredible melody.

The Killers – “My Best Friend’s Girl” (The Cars)

“Popular band covers hit song by a recently passed musician who inspired them.” It’s a tale as old as time, and for good reason: musicians wouldn’t be who they were without those who came before them. You can’t get a better example this year than The Killers paying tribute to The Cars’ Ric Ocasek, who died back in September.

The Killers’ band leader Brandon Flowers is a well-known lover of the pop genius that is Ric Ocasek and The Cars; he was the one who inducted the band into the Rock & Roll Hall of Fame just last year. Four days after Ocasek passed away, Flowers and crew paid took on “My Best Friend’s Girl” from The Cars’ first record with an on point performance in Bethlehem, PA.

The most popular song of the year was inarguably “Old Town Road” by Lil Nas X, which broke the record for most weeks at number one on the Billboard charts. It did that because it defied genre expectations; was it country, or was it rap? All we knew was it was charismatic as hell and kids LOVED it.

Another modern musician who defies genre, Anderson Paak., used “Old Town Road” as a blank canvas when he covered it on BBC Radio 1 Live Lounge. By pivoting to soul-funk fusion, .Paak used the performance to take the horse from the “old town road” to a new city street.

Is Sublime cool again? Was Sublime ever cool? Are they cool now? I’m still not sure, but Lana Del Rey didn’t seem to care when she released this cover (of a cover?) as one of the singles from her new album, Norman F*cking Rockwell.

Regarded as Lana’s best album yet and critically one of the greatest albums of 2019, it’s funny to think that our introduction to NFR was a slick cover of California’s greatest ever reggae-ska-funk-hip-hop-punk band. But something about it keeps bringing you back to the beach.

I purposely made the decision not to rank this list because I wanted it to seem as subjective as possible. That being said, there is a clear #1. No cover song felt like an event like the Highwomen’s performance of Fleetwood Mac’s “The Chain.” Like Dylan going electric 50+ years prior, the Highwomen’s debut at Newport Folk Fest felt like the tides were shifting.

The culture has heard a lot of “The Chain” in the past couple years: it has shown up in Marvel movies, video game commercials, and more. But something about four of Nashville’s most prominent boundary-pushers coming together and choosing to do this song makes it feel that more urgent in 2019. From the intrinsic harmonies to the communal delivery, the Highwomen did what makes the best covers the best: made it their own.