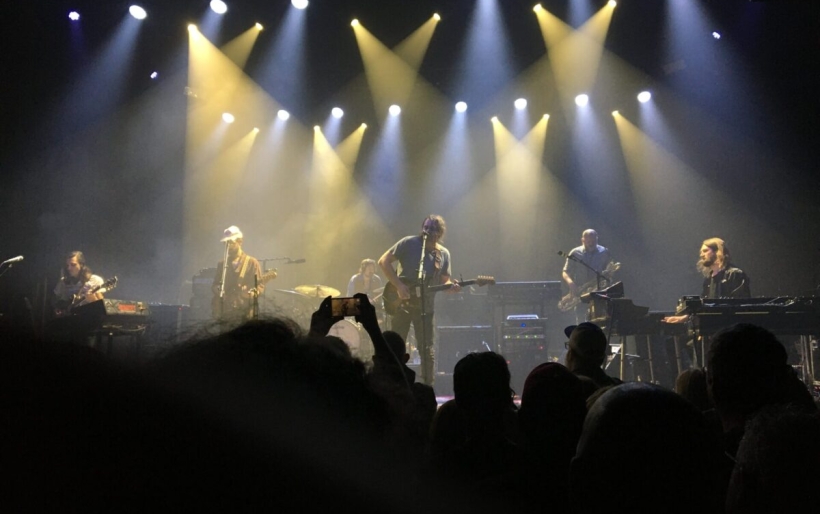 The War on Drugs | photo by Tyler Asay for WXPN

The War On Drugs kicked off night one of their second annual “Drugcember To Remember” event at Union Transfer on Sunday night. The Philadelphia wizards, led by Adam Granduciel, played to a packed, sold-out crowd full of fans both young and old.

It was a celebratory night in Philadelphia; it was their first performance in the city since the last Drugcember and the Eagles had just clinched a trip to the playoffs. Tons of fans decked out in Eagles gear flocked into the venue around 8 p.m (I’m sure noted Drugs fan and former Eagle Connor Barwin was there hanging out as well).

After a hazy and psychedelic set from New Parents, Rosali took the stage. Another Philly local, Rosali and her new band (consisting of members of The Walkmen and Cloud Nothings) played cuts from their 2018 record Trouble Anyway along with new songs as well. Their first performance together as band showed a new folk-pop gleam that proves they will have an eventful 2020.

The War On Drugs filled the stage just before 10 p.m. to a mighty applause as a thick layer of smoke covered the stage. It made sense to spend one of the last nights of the decade with the best band of the decade. There’s not much that beats the moment of liftoff when the drums kick in a couple minutes into “An Ocean In Between The Waves” or the pummeling guitar solo from “Strangest Thing.” (My personal “album of the decade” is 2014’s Lost In The Dream. A perfect piece of highway music if there ever was one.)

After warming up the crowd with a couple more slick cuts from Slave Ambient and A Deeper Understanding, the band kicked it in by doing what makes Drugcember such an event: bringing up special guests. The first of which was opener Rosali, who joined them to cover “Birds of Paradise” by the Pretenders. Mike Polizze of Purling Hiss joined a couple tunes later for a rousing, extended version of Neil Young’s “Look Out For My Love.”

It was a dynamic night from the War On Drugs, with Granduciel picking up the acoustic guitar for a more meditative version of “In Chains” filled out with a harmonica solo and a full throttle take on “Under The Pressure.” They even busted out their Warren Zevon cover, “Accidentally Like A Martyr.”

“We’re gonna do it every year,” exclaimed Granduciel in between E-A-G-L-E-S chants and some krautrock heavy Slave Ambient jams, which brought them to the end of the night. Drugcember has become a tradition and we’re all happy it’s here to stay.

Between Slave Ambient, Lost In The Dream, and A Deeper Understanding, The War On Drugs really were one of the defining rock & roll bands of the 2010’s. And to have them be one of Philadelphia’s prime musical exports while still maintaining a sense of home in this city is special. This band, and Drugcember, puts a cap on both the year, and the decade, with hopes that there will be many more to come.

Night Two of “A Drugcember To Remember” happens tonight at The Fillmore.