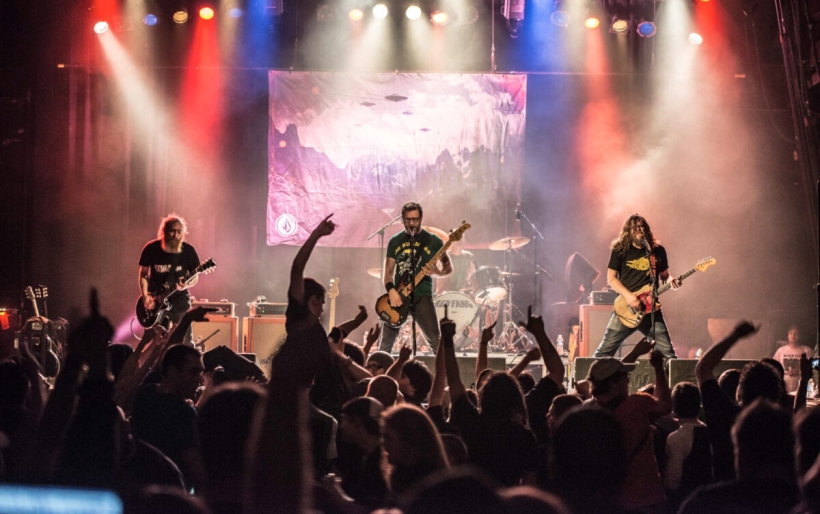 Red Fang at The Troc | photo by Matt Shaver

The Key’s Year-End Mania: Read the 15 most-popular Key stories of 2019

Year-End Mania is the Key’s annual survey of the things below the surface that made 2019 incredible. In this installment, we bring you the ten most popular Key stories of the year.

But more and more, people who exist outside of the margins, not just because they wear all-black or have pink mohawks, but because of who they are, are finding the resources to get involved, and the cultural texture of the city is richer for it. We’re a city that has been home to Break Free Fest — a musical event highlighting bands who feature Black and Brown musicians screaming their brains out, an event that happens this Saturday and Sunday at The Rotunda. We’re a city that, before Break Free, was home to Rockers, a recurring event that for more than a decade sought to do the same.

14. XPN Fest Recap: Elvis Costello and Blondie celebrate the past while looking to the future — July 28, 2019

When an artist has been making music for over four decades, there are a couple common routes they can take with they live shows. One: stick to the tried-and-true, deliver a crowd-pleasing hit-parade, dial down the surprises or spontaneity. Two: write immersive new records and focus only on them, jettison the career-making singles that they’re tired of playing and don’t feel connected to anymore anyway.
Or they could find a third option in between phoned-in and alienating. On Saturday, two elite members of the post-punk / new wave vanguard, Elvis Costello and Blondie, did just that, headlining night two of the XPoNential Music Festival with sets that played equally to the casual listeners and the die-hards.

13. Tool brought Fear Inoculum to Philly this week. Here are six takeaways from the show. — November 19, 2019

On the surface, Tool can be big and bad and scary. Some of this is satirical; some of it (the flickering, frenzied world of their macabre video backdrops, made under Jones’ art direction) is legitimate nightmare fuel. But the band’s juxtaposition between sonic and visual brutality with sensitive, soaring vocals from Keenan has always made it clear that Tool was oriented in a cautiously hopeful direction. Last night might not have left us with the “create something positive” marching orders we got at the same venue 18 years ago when Tool played Lataralus to an on-edge crowd in the wake of 9-11. But the sense of powerful catharsis it left us with was the same.

12. The site of legendary Trenton punk venue City Gardens is up for auction — September 4, 2019

The venue played host to many legends of the 80s and 90s underground, from Bad Brains to Black Flag to The Replacements and Nirvana. WXPN’s Bruce Warren remembers that he saw “every SST band ever” at the venue, and Ween considered it their first home base, debuting at a notorious show where trippy Texas noisemakers Butthole Surfers nearly set the club on fire. In the mid 80s, the staff included a young Jon Stewart tending bar.

11. Eclectic, eccentric songwriter Leon Redbone has passed away; listen to five favorites from his songbook — May 30, 2019

Redbone brought back old-school jazz, ragtime and Tin Pan Alley into the rock and roll era. Notorious for evading interviewer’s questions and deflecting attention from himself, Redbone — a longtime resident of New Hope, Pennsylvnia —  made sure to be remembered for his music. In honor of his legacy, the following is a compilation of some of Redbone’s most notable songs.

If you’ve read anything about storied Trenton venue City Gardens, it probably involves how it was a grody and raucous space, often packed with mosh pit machismo and relentless roughhousing. If you’ve read anything about alternative-era icons Nirvana, it probably involves how they had no tolerance for that sort of thing. Like, at all. So when Kurt Cobain, Krist Novoselic, and Dave Grohl played there on September 27, 1991, it was the perfect storm for a train wreck. And yet the energies in the room — crowd and band alike — managed to find a balance, and ultimately transcend into a chaotic kind of joy.

Perhaps, then, it is my own emotional state at present – the sense of loss that is a recent death in the family – or a greater understanding of what drove Mercury before his passing, what caused him turmoil, that allowed his lyrics (now interpreted by the more-than-amply-suited Adam Lambert) to reach me in a deeper sense. At the cavernous Wells Fargo Center, before a screaming, sold out crowd, Queen genuinely touched me, just when I needed it most.

8. Bruce Springsteen and The Meaning of Life: Western Stars is uneven, but unafraid — June 14, 2019

On Western Stars, we absolutely hear how Springsteen – now age 69, and with a little bit of a creak in his voice – continues to try new things. The 13-song, 50-minute record finds The Boss in solo troubadour mode once again, with a twist. This time he’s not attempting to be Woody Guthrie, or Bob Dylan, more obvious moves he’s made many times in the past. This time, he’s more inspired by Glen Campbell, Johnny Cash, and Roy Orbison. He yearns to play immaculate pop music, sing timeless melodies with a country twang, while angelic orchestrations lift the songs into the stratosphere. Listening to the windswept shuffle and elegiac pedal steel of “Hello Sunshine,” and noticing its aching life-in-the-rearview lyrics about loneliness and solitude, is what I imagine death would be like in the Great Plains on a beautiful, cloudless, quiet day.

With Jagger back to fighting fitness after his recent heart surgery (which cancelled an earlier “No Filter” Philly tour date in the first place), Keith Richards back to brown hair (he let it go white for a while), Ron Wood looking fitter than ever (sobriety suits him) and Charlie Watts grinning (!!!!), the evening was prime latter-day strong Stones – ragged, slower, noisier and mightily rocking.

An upbeat and outgoing person with a radiant smile, Hogans most notably brought his talents to Three Man Cannon, the atmospheric indie rock outfit founded with his friends (and co-songwriters) Matt Schimelfenig, Pat Brier, and Dennis Mishko. Their collective roots trace back to the Northeastern Pennsylvania scene of the late-00s, and Hogans (often credited as Spenser Colmbs) wrote and sang the dreamlike “Moving Onto Martha Street” from their 2014 album Pretty Many People, as well as “How A Mouse Could” from last year’s self-titled LP.

The Trocadero is, in many ways, a relic of the past — an antique building, an antique business model, an antique music industry that is increasingly less friendly to non-corporate players. And while the spirit of its past may once again find relevance somewhere down the line, today we celebrate it as it was, in all its rough and rowdy glory. Here are 20 audio and video recordings capturing the magic of The Trocadero from over the years.

Fans had gathered at the Monmouth County Historical Association on Saturday night for a preview party celebrating the opening of the new Springsteen: His Hometown exhibit, but they weren’t expecting to see The Boss himself. After checking out the exhibit, Springsteen joined Joe Grushecky and the Houserockers onstage to perform “Light of Day.” According to the MCHA, this was Springsteen’s first performance in Freehold Boro since 1996.

“Music is one of the deepest, most meaningful ways human beings can connect to each other,” said Douris. “It’s a connection that can seem transcendent; almost magical. I’ve spent my life chasing that magic and I’m thrilled that the chase has led me to World Cafe. I can’t wait to discover and share music with World Cafe’s passionate, curious audience – and I look forward to approaching conversations with the artists who create that music with that same passion and curiosity — to bring you real, genuine, thoughtful conversations you can’t hear anywhere else.”

Some 45 music experts in our periphery contributed the voting for this list you’re about to read — including most of WXPN’s on-air staff, behind-the-scenes production folks, as well as The Key’s staff of contributing writers and photographers. We’re all passionate about the music we consume, we all love vastly different things, and these are the records that made the biggest impact on us collectively.

On August 15, 1969, at 5:07 p.m., Richie Havens took the stage at Max Yasgur’s Bethel, New York dairy farm, kicking off three days of peace and music. As we get ready to celebrate the 50th anniversary of Woodstock this month, we find that while the festival lives on in memory and mythology, it’s hard to imagine what it was really like if you weren’t one of the nearly half a million attendees.