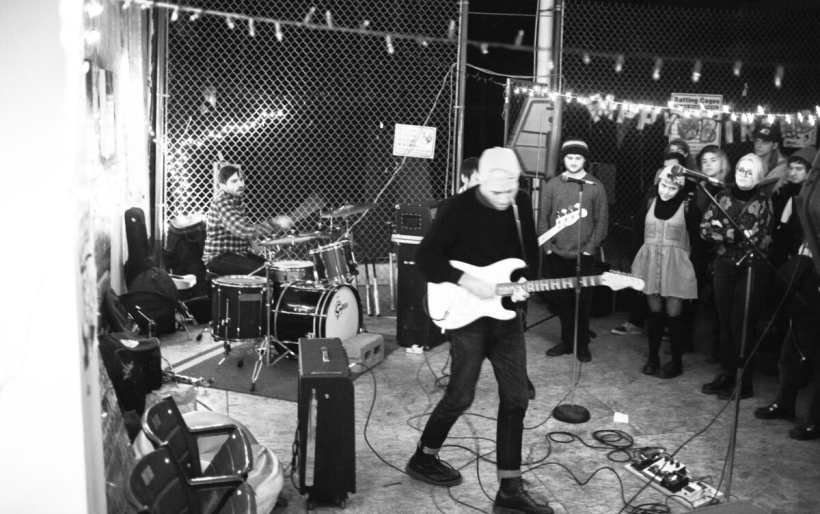 Everybody Hits’ Final Out will bring Hound, Hurry, and Amanda X to the batting cages one last time

Sad news hit Philly’s music scene over the holiday when Everybody Hits — the indoor batting cage by day, DIY music venue by night — announced that it would be closing for good.

Located at 6th and Girard, the space opened in 2013 with the intent of being an after-school hangout for Philly teens (this Billy Penn piece does a great job highlighting the importance of the Cages’ daytime life that its after-hours regulars might not have realized). Not too long after, it began playing host to all-ages gigs in the local independent music community, with artists like Dogs on Acid and Birds of Maya playing its earliest shows; over time it provided a space for promoters like Mel Grinberg of Home Outgrown and Ruben Polo to put on their events.

Now, the building has been sold by owner Franklin Berger, and the cages are being forced to vacate the space. “No social media update can wrap up all of our feelings about it,” founder David Gavigan and current owner Malik Collier wrote on Facebook. “But we are super bummed and apologize for the abruptness of it all.”

This Saturday afternoon, January 4th, Everybody Hits is throwing an Everything Must Go sale, since quite a bit of batting cage-related materials need to be removed from the building before it vacates. The event page lists “baseball bats, baseball helmets, a WHOLE batting cage, a vending machine” as items that will be on offer, as well as gig-related materials like a PA system and show posters. The sale begins at 11 a.m. and Gavigan writes that he will likely be wearing a winter coat, as it will be cold indoors.

And there will be music, too. Everybody Hits regulars Hound, Hurry, and Amanda X will perform, with sets beginning at 2 p.m. This is significant not only in that it’s a rare chance to see live music in the daytime (and there should honestly be more matinees in our city) but in that it marks the end of a vibrant era for Philly DIY. Everybody Hits played a vital role in the Philly music scene, not just as a place that fans could go see awesome music, but as a place that was accessible and welcoming, unique but not in a contrived way, a place that prized community over commercial gain. While we have no doubt that somebody will take up the all-ages show space torch, the magic of Everybody Hits was unique unto itself, and we asked the artists performing the final show to weigh in on it. Check out their thoughts down below.

The music scene in Philly is huge, and when you’re a newer or smaller band, it can be really overwhelming; feeling like the barriers to entry and acceptance are incredibly high. DIY spaces, run by enthusiastic, energetic, and often insane (in the best way) people have always been the best antidote to that.

Hurry was still pretty new when Everybody Hits popped up on the scene. I honestly don’t remember how I met Dave initially. But any time I needed a place to play, he was always welcoming and genuinely caring when it came to making it happen. This goes back to the insanity part: Dave would be there before the show started, setting up the PA while simultaneously handing out tokens to batters — and he would be at the show long after it ended, (mostly) cheerfully packing things up and cleaning. It was inspiring, if not exhausting. And his attitude and positivity was contagious. Even when shows went terribly, Dave was all smiles, and made me feel like less of a loser. It was hard to be down on yourself in that space.

We had almost all of our record release shows in that building, and basically any other show I cared enough about to book myself. It was a place where my little corner of the music world came together, and where I have some of my best memories of performing and just hanging out. I genuinely don’t know what we’ll do without it. It was such a rare, special thing. Dave is a hero. If I ever get rich I’ll commission some kind of beautiful statue of him.

I loved the Cages and how they were made available to any genre of music, any type of person, any type of event. I feel like it was super unique, of course, in the sense that nobody else is booking punk shows at a place typically catered towards jocks. I think more than anything, it shows the resilience of punks searching out potential DIY venues and this one just happened to be run by one of the most genuine people to walk the streets of Philadelphia, David Gavigan. Oh, also it had a working PA, haha.

But overall what I would say about the Cages is that it was inclusive and always down to make things happen in the name of DIY, multiple days a week for a few years straight. It lasted longer than a lot of DIY spaces because everyone involved in almost every show, really respected and cared for each other, the space and the bands playing. I find that to be rare in most other cases, but with David, there’s just not a sweeter, friendlier person to make you feel welcomed enough to keep coming back again and again. It became a destination spot for many people. One of those rare venues where people show up no matter who is playing, just because it’s a show at the cages.

Growing up here and going to shows for so long, a lot of venues have popped up and had such a large impact in such a small time. I know and hope many more will continue to, but at this moment, Everybody Hits set the bar high, and I feel like some kid is out there, working their ass off, determined to find the next new DIY space, and they’ll be using The Batting Cages as their example of how it should be.

I lived at Big Mama’s Warehouse, about a block away from Everybody Hits. The cages were our home base for almost a decade. It meant more than other DIY punk spots because David became part of our community, and he gave back to the community directly through his business. I can’t believe it lasted for as long as it did. It makes you really appreciate what you have in the present, because it might be gone tomorrow.

Everybody Hits: The Final Out takes place on Saturday, January 4th, with the sale beginning at 11 a.m. and music beginning at 2 p.m. More information can be found here.