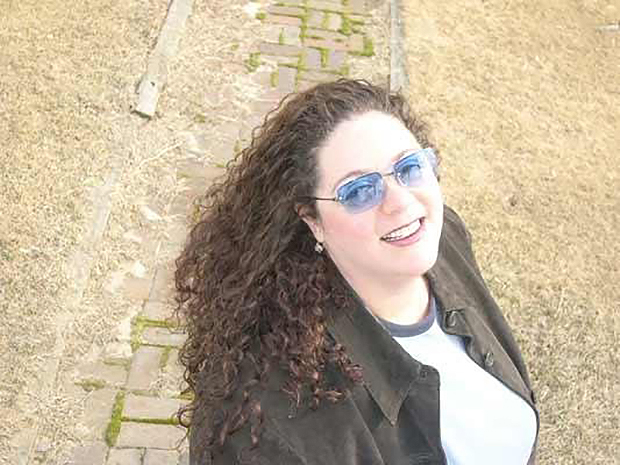 If you made the rounds in the Philadelphia music scene in the late 90s and early 00s, chances are you encountered — and were subsequently charmed by — the warm and inviting voice of Nancy Falkow. A dedicated, driven, and immensely positive person, Falkow was active in local singer-songwriter circles for over a decade, and love and tributes poured from that community when news got out that Falkow sadly passed away yesterday after a two and a half year battle with ovarian cancer. She was 49 years old.

Equally enamored with Indigo Girls, Ween, and Richie Havens, Falkow put all sides of her personality on display in her music, which could be earnest and yearning as often as it was clever and comical. She knew how to make her audiences laugh, she knew how to make them cry, and she encouraged them to join her in song over the course of an EP and two full-lengths, as well as various demos, singles, and side projects.

Nancy Falkow-McBride was born in 1970 in Atlantic City, grew up in Margate, New Jersey, and moved to Philadelphia for college in 1988. She studied education at Temple University, and later got a graduate degree in Environmental Studies from Beaver College (now Arcadia University). She planned on being a teacher until, as she wrote in her website bio, “I met a few folks who changed the course of my life.” Those folks would be Mark Getten and Scot Sax, of the 90s local rock breakouts Wanderlust, and they encouraged her to pursue the songwriting that had previously been relegated to circles of friends in their dorm rooms.

Falkow worked with Sax on her five-song self-titled debut CD, released in 1997, and from there she leapt into the local music community, working as a doorperson at Old City folk haunt Tin Angel, as publicist for Tongue and Groove Studios, and as a studio manager at Indre Recording, all the while hustling around to gigs that ranged from regular co-bills and opening slots at The Point to headliners at The Pontiac Grille.

Falkow “was such an important part of the songwriter landscape in Philly in the 90s/2000s” writes Jesse Lundy of Point Entertainment. She was championed on WXPN by Women’s Music Hour host Michaela Majoun, and got her first major break in 1998 when she won a local artist slot at the second edition of Lilith Fair, Sarah McLachlan’s touring summer festival celebrating women in music.

Falkow got to sing three times at that Lilith Fair gig, for increasingly larger crowds over the course of the day; she started off with a full performance with her band on the festival’s Village Stage, and later joined Indigo Girls on the main stage to sing along to their set-concluding number “Closer To Fine.” She popped back out on the main stage during the festival’s headlining set as well, sharing the mic with McLachlan on a cover of Marvin Gaye’s “What’s Goin’ On,” sung to a crowd of some 25,000 people.

An indepth story in Philadelphia City Paper found local journalist Margit Detweiler following Falkow’s journey that day, which included no shortage of rubbing elbows with heroes, signing autographs, and also slipping folks her CD — working connections and making new ones wherever she could.

“I’ve always been concert girl,” Falkow told Detweiler. “Trying to sneak up front or get backstage. My first concert was the Police at Atlantic City Convention Center in 1984. We had really bad seats, so I snuck up front. It was then I realized if you used those sneaky little skills you have, you can get anywhere.”

Lundy attested to Falkow’s affable personality in a memorial post he shared on Facebook: “Nancy was loud, sarcastic and enough of a wiseguy to be exactly the kind of person I like being friends with,” recalling their casual moments of shared laughter as readily as musical encounters.

Her first full-length, 2000’s Smitten, was a step up from her previous recordings, merging the smooth glide of 70s pop/rock favorites like Carly Simon and Linda Ronstadt with the sparkling production and post-millennial perspective of songwriters like Paula Cole and Fiona Apple.

Around this time, Falkow began branching further out with her music, lending her voice to recordings by G. Love and Marah, joining jam band faves moe. onstage at the Tower Theater to sing on their tribute to Pink Floyd’s Dark Side of the Moon, and forming the rock outfit Dirty Triplets with singer-guitarist Joan Solley, drummer Joann Schmidt, and guitarist Kara Lafty — they opened for Tanya Donnelly at the TLA in 2001, and Falkow called the band “the most excellent musical experience of my life.”

She frequently shared the stage as a solo artist with witty, whimsical singer-songwriter Dierdre Flint — XPNs DJ Robert Drake remembers hosting them both on Kids Corner to showcase a childrens’ music project they were cooking up — and her live band was ever-evolving, featuring regular contributions from Mike “Slo-Mo” Brenner on lap steel guitar and percussionist Hoagy Wing. She was one of the featured singers on Brenner’s mid-00s album My Buzz Comes Back, appearing on “Come What May” and “Wonder Why.”

Following the release of 2004’s Clear View and an appearance at that year’s Bridgeton Folk Festival — her local farewell concert — Falkow married Frankie McBride and moved to Dublin, Ireland, later resettling in County Wicklow where her family grew in a pastoral abode between the mountains and the sea. She and her daughter Hannah became enthusiasts of sea glass and sea pottery, and took to selling it online at their Seabloom Art store. She continued with her music, collaborating with her friend Fran King on a project called Sunflow, which released an album of lullabies called Under the Stars in 2008; their song “I Wish You Love” was placed in a Toyota Prius commercial, an episode of the CW Network’s Life Unexpected in 2010, and an episode of Degrassi in 2011. Her solo single “What I’m Doing Right” appeared in 2012, and her final song — the moving “Accommodation Road” — came out in December of 2018.

Falkow’s music and magnanimous personality touched seemingly everyone she worked with; phrases like “hilarious and giving,” “a powerhouse and a sweetie,” and “a bright life force” stood out among the social media remembrances of her these past 24 hours.

XPN’s Helen Leicht was a longtime friend of Falkow’s, and says “She was a fighter.  Stronger than most people.” Leicht is an ovarian cancer survivor, and says Falkow reached out for advice after her own diagnosis in 2017, to have those conversations that folks won’t understand unless they’ve gone through it themselves. They kept in touch through Facebook, and as Leicht says, “She never missed wishing me a happy birthday or happy anniversary. We will all miss Nancy. A talented singer songwriter with a beautiful smile and big personality.”

Sax and his partner Suzie Brown have said that proceeds from their January 8th concert at City Winery Philadelphia will go to her husband and daughter. More information on that concert here, and explore more of Falkow’s music below.