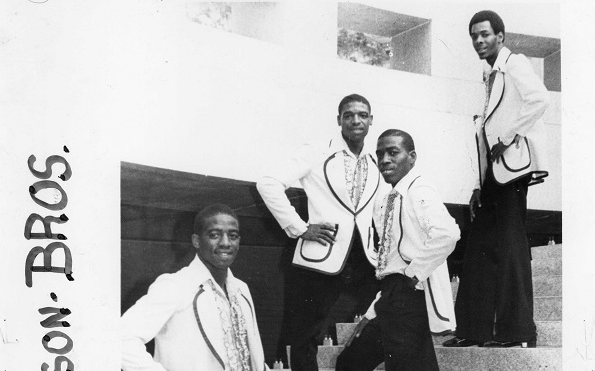 Brewerytown Beats has dug up a piece of Philly soul history and brought it back out into the spotlight where it belongs. The Thompsons were a popular R&B/soul band around their North Philly neighborhood in the 70s, but never made it big time. The group of three brothers — Cornelius, Sylvester, and Bill Thompson — released just one album, I’ll Get Over It, as teenagers in 1975 before fading into obscurity.

It so happens that Brewerytown Beats, the record store on West Girard, is just blocks from the Thompson brothers’ childhood home. When store owner Max Ochester met The Thompsons and their producers last year, he immediately got to work on a reissue of their album.

Drawing comparisons to other artists of the era like the Delfonics and the Stylistics, Marvin Gaye and Curtis Mayfield, a press release describes The Thompsons’ music as “emotional and soulful, at-times dancefloor friendly, and fully worthy of inclusion in the Philly Soul canon.” Listen to “I’ll Always Love You” below, which is accompanied by a new animated video by Philadelphia visual artist Jay McQuirns.

The I’ll Get Over It reissue is available on vinyl, and a CD will be released next month. Read more at brewerytownbeats.com.