You've Got A Friend: Petal bravely bares her soul and speaks to the power of community at Boot & Saddle benefit - WXPN 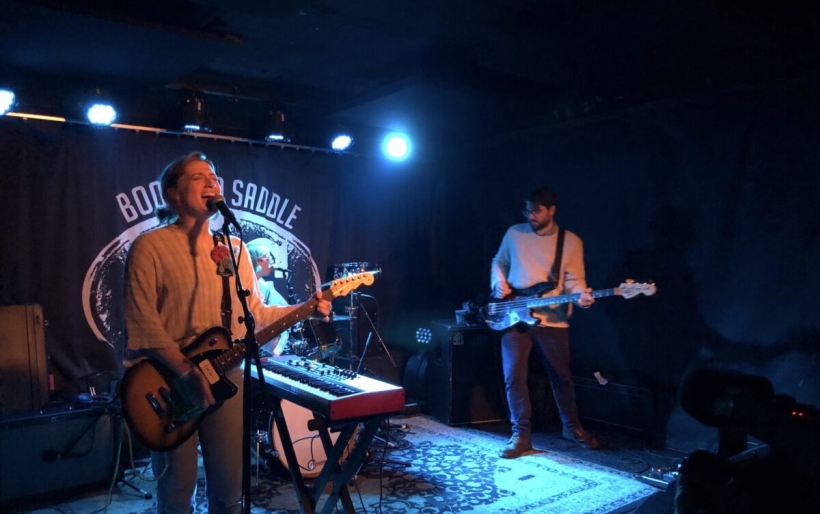 You’ve Got A Friend: Petal bravely bares her soul and speaks to the power of community at Boot & Saddle benefit

Kiley Lotz, the driving force behind Scranton’s cathartic rock project Petal, poured her heart out for the first night of Boot & Saddle’s Lame-O Records residency. All proceeds from this show benefitted various charities in memory of Lotz’s good friend, Spenser Spirit Hogans, a staple in Philly bands Cave People, Three Man Cannon, and Cherry, who suddenly passed away during the summer of 2019.

Preceding Petal were Cherry and Strangepride, and the usual echoing, ethereal vibe of the latter indie group was necessarily dialed up to kick off the night. Their set was a perfect mix of twinkling guitar sounds and vocals that toed the line between earnest and full-on energetic. This band has a very unique duality from their recorded versus live sound. Both elements of light and heavy shine through, but to kick off an event such as this called for an amp-up in energy, even though the night was certain to be a rollercoaster of every kind of feeling.

Cherry, however, was missing a key member in their lineup, which was a heavy thing to watch take shape on stage. Their set was also appropriately turned up, pulling tracks from their 2018 EP Strong. The high-pressure vocals paired with heavy guitar and the overarching emotional balance of enjoying the set and missing one of their most important band members was obvious.

“Spenser loved music,” said Cherry lead singer and songwriter Russell Edling. “He loved playing in this band, and it’s weird being up here without him.” But sharing the moment makes it easier to process grief, and Edling acknowledged that as well: “We love all of you for being here with us tonight.”

There was an evident push and pull in Cherry’s set. Their sound is unassuming yet incredibly tight, but the circumstances in which they were playing live again for the first time in a couple months did not go unnoticed.

When it was Petal’s turn to headline, the crowd knew from the get-go that we were going to be in for an emotional ride. As she took the stage, Lotz stood for a moment to let out a burst of “kinetic energy in every color” and just shouted with us. She urged us to let go of whatever heaviness we were feeling and to just be here in the moment, because this show was so deeply important. The amount of gratitude that poured from her throughout the whole night was palpable to the audience and returned back to her tenfold .

The start of her set was heavy, taking off with full force to tracks off of her 2018 release Magic Gone. But when she eased into quieter moments with “Tommy,” “Magic Gone,” and “Stardust,” I didn’t know whether to cry or yell the lyrics back at her or both. “Stardust” especially was one of the most cathartic moments of the night. She traded her guitar for a keyboard for these songs, and the lyrics — the part of her craft where she undeniably thrives — hit me like a punch in the stomach. I was close to crying more than once, but this song: it hurts. You’ve lived these lyrics, even if you haven’t. When she sings them to you, you get it. Listen to it. I can’t even attempt to just write the words out for you here. It’s a feeling that anyone who’s loved someone and lost them has felt. Petal’s universality is a coveted quality, and any aspiring songwriter should take serious notes from her.

The moment that broke my heart — and perhaps the only moment truly worth standing still for if you were able to see any of her set — was when Lotz took several minutes to reflect on personal stories about Spenser. She thanked his parents, who were standing among the crowd, for providing space for so many of his friends to explore their creativity over the years. Everyone knows parents like that, who made you feel like their own. She recalled band practices, those seemingly innocuous moments that shouldn’t stand out in real time, but they’re the most important things you have when the person central to those moments is gone. She dutifully poured her heart out to the crowd when she really didn’t have to. When I say there wasn’t a dry eye in the room during those five minutes, I mean it. Even if you didn’t know this person, for who this entire night was about, you felt like you did when she spoke about him.

From there, Lotz sang a beautifully simple cover of Carole King’s “You’ve Got a Friend.” I couldn’t handle how perfect it was. She started her set heavy, and I originally wanted to focus on how she proved that Petal isn’t delicate, and it isn’t gentle, but when this sobering moment arose, I scrapped all of those ideas. The point of her set was vulnerability and love and selflessness, and there were so many points of connection throughout the night where I felt so deeply moved in ways that a live show hasn’t pulled out of me in a while. I feel grateful to her for that.

Here’s the thing that you should take away from Petal’s shows, but specifically from this one: love fully and fiercely. Do it without regret. She emphasized this explicitly without coming off as preachy or cliche. Everyone has lost someone – it’s just universal fact. But learn from that loss, and write songs about how it felt, and make sure the people you love feel that every day while you’re with them.