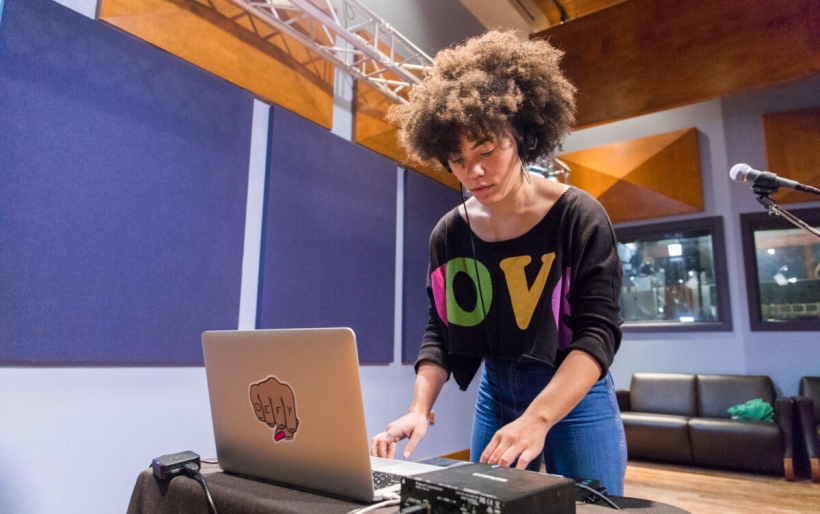 In the space between Juliana Barwick and Solange sits Madison McFerrin.

The inventive singer, producer, and songwriter — who spent her youth in Philadelphia before moving to Boston for school and then Brooklyn for her career — constructs breathtaking worlds with a microphone and a looper station, starting out on a deep staccato thrum, building in layer after dazzling layer of soaring vocals, and letting the piece of music take flight.

She’s also equally adept at pop-oriented grooves, and we hear a bit of both in her recent performance for The Key Studio Sessions. The synth-textured “No Room” glides out of the heavenly atmosphere of “Re:Intro,” slinking and swaying to a chorus of voices and a bossa-adjacent beat as the singer contemplates compatibility. The house-oriented bump of “Try” is the opposite side of that story, with words of dedication to overcoming differences.

McFerrin comes from a long line of musical talent; best known is her father, Bobby McFerrin, the a cappella / jazz vocalist who had a massive pop hit with “Don’t Worry, Be Happy” in the 80s. Her grandfather Robert McFerrin Sr. was the first black singer at New York’s Metropolitan Opera, while her older brother Taylor McFerrin is a producer and songwriter who worked with Madison on the You & I EP, which released in December of 2019. In an interview with The Key around the album release, Madison discussed those family ties, and how she and her brother were encouraged to find their own lane, and develop their own unique voice — something she’s already done, and will no doubt expand further as her career progresses.

McFerrin recorded this studio session when she was in Philly to play MilkBoy for her EP release, and it shows both sides of her artistry, concluding on an expansive and otherworldly take on her song “Know You Better,” which repeats, builds, stretches, breathes, and takes on a life of its own before slipping into psychedelic reverse and dissolving into the ether. Watch and listen to her performance below, beginning with an NPR Music Live Sessions video of “Re:Intro” and “No Room.”