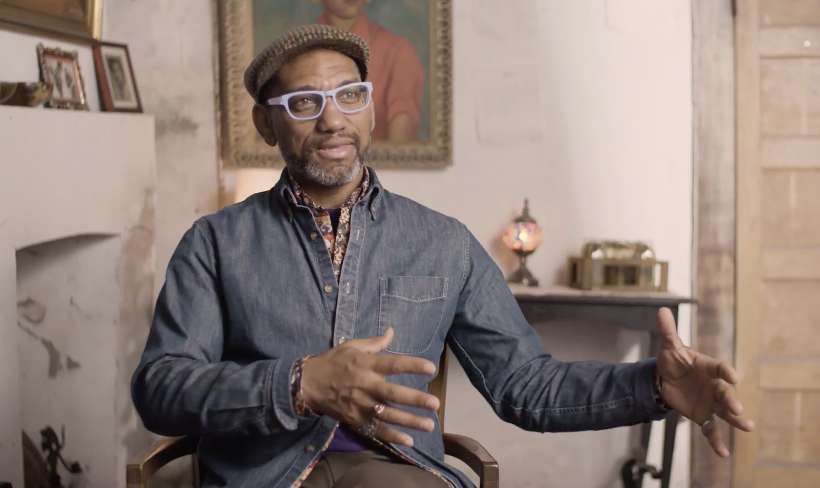 Louisiana painter, singer, and preacher Sister Gertrude Morgan passed away 40 years ago at age 80, but her music and art lives on. This month, three of her paintings were made available from famed NYC auctioneer Christie’s, and as a lead-up to the sale, Philadelphia producer and DJ King Britt teamed up with Preservation Hall Jazz Band’s Ben Jaffe in a short video to put her work in context anew.

King and Jaffe first collaborated a decade and a half ago on a project bringing her voice and songs into the sound of the 21st Century. King Britt Presents Sister Gertrude Morgan was a remix answer to Pres Hall’s reissue of Let’s Make a Record, an album that Sister Gertrude recorded in 1970 a cappella with tambourine.

In the video, King says that he was not familiar to Morgan prior to being approached about the project in 2005. His label at the time, Ropeadope, sent examples of her music and artwork to him for inspiration, and his reaction was powerful. “How come I had never heard of her before? Her stuff is in the Smithsonian and all over the world,” King recalls. “And then I heard her voice and it just pierced my whole spirit.”

King said the project was treated as though Sister Gertrude was in the studio with him and collaborator Tim Motzer, and speaks to the way her music and art feels, in a word, eternal.

“Her work will forever be relevant and influential, because it’s extremely authentic and timeless,” King says. “You’re going to feel something very special.”

Watch the video below, and revisit the album and a 2005 All Things Considered feature on it.