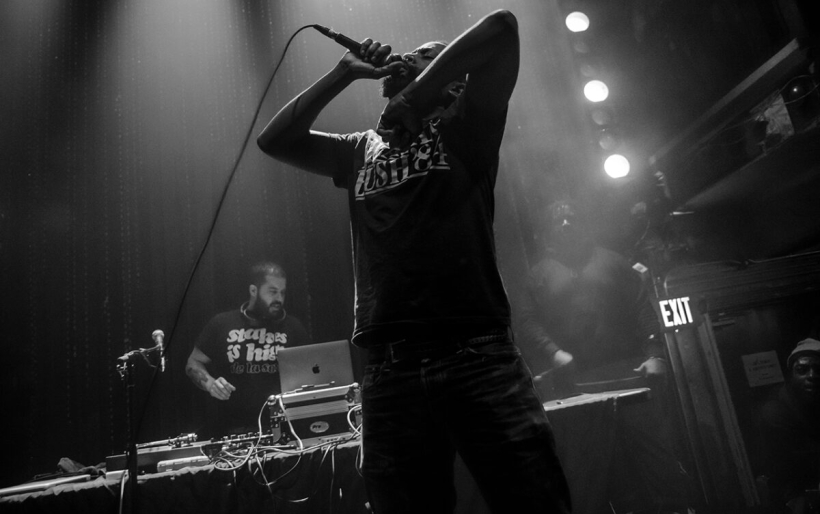 On Thursday, January 30th, Johnny Brenda’s played host to a bill stacked with a who’s who of contemporary underground hip-hop. The show opened the duo with Shrapknel, featuring Curly Castro and Prem Rock from Philly’s Wrecking Crew trading razor-sharp lines in an intricate interplay of back-and-forth lyricism.

Hunkered down behind a table of effects pedals, Moor Mother opened her set in a swarm of densely-textured sound, mixed with layered and pitch-shifted vocals. For the song “After Images,” Moor Mother twists and contorts the sound of her voice around a pounding 4/4 beat. She asks “Is that a warship or something? Are you worshipping something?” and then proclaims that “The truth will do you no good in here!” as a slow-growing web of distortion and delay fills the room. The most physically challenging set of the night, Moor Mother’s sound grabbed the audience by the neck, pulling us into an ever-deepening cavern of pure Black noise.

Taking the stage solo, armed with only a mic and a laptop, the New York-based rapper / producer E L U C I D launched into a set of songs culled from his broad catalog of dark beats and incisive, revelatory lyrics. For “Peace is the opposite of security” (a collaboration with rapper / producer milo), E L U C I D rips through elegant lines that illustrate the alienation of contemporary life: “Reality’s not all that’s displayed, graphic-ed hard plastic automated action / agitated how we behave wide net cast over jagged chasm compassion / we’re a fuckin’ plague Anxiously waiting for the world to collapse, then nothin’ happened…”

Toward the end of his set, E L U C I D was joined onstage by fellow Backwoodz Studios collective member Billy Woods. Together, Woods and E L U C I D form the duo Armand Hammer whose 2018 album Paraffin examined “madmen and cowards” trying to make their way in a world descending into entropy. After Woods and E L U C I D rocked through a handful of tunes in tandem, Woods took the reins, delivering lines in his trademark staccato flow, spitting and emptying the clip of lyrics and images that were nothing less than scratching, visceral cries for survival and resistance.