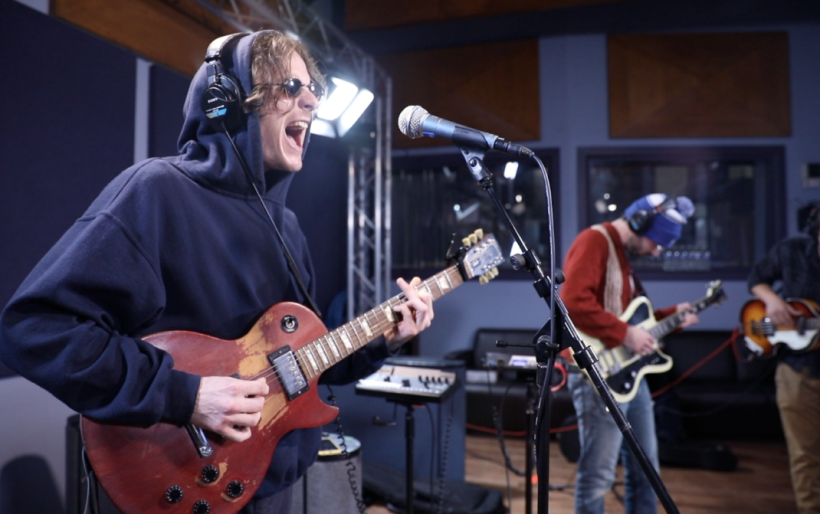 This week on The Key Studio Sessions, we travel several hours north to meet Montreal, Quebec, Canada singer-songwriter Michael Hansford, who has been releasing delicate and emotionally-driven records under the name Molly Drag since 2014.

Hansford’s music is reminiscent of the mid- to late-90s slowcore movement; bands like Slint and Low might pop into your brain as you listen to this performance. And what, you might ask, is a Montreal artist doing in a series that focuses on Philadelphia area musicians? When Molly Drag tours the United States, Hansford enlists a Philadelphia band by the name of Past Life to be his backing musicians — Anthony Massucci on bass, Branden Bauer on guitar, Dash Williams on keys, Justin Sterchele on drums — and it’s a beautiful, breathtaking way to make the music he creates by himself in the studio come to life for a U.S. audience.

This stunning set was recorded last autumn when Molly Drag and Past Life were on tour together last fall. It features three songs — two from Molly Drag’s most recent project Touchstone, and one going back to 2017’s Whatever Reason — all touching on themes of anxiety, addiction, mortality, and melancholy, but beautifully rendered in minimal guitar strokes, nervy synthesizer, and Hansford’s cutting falsetto.

While Molly Drag is back home in Montreal with no current touring plans — we imagine another record is percolating, given Hansford’s output level of three releases in the past two years — Past Life currently is on a U.S. tour, with two homecoming shows on the calendar: February 28th at The Kaleidoscope in Lancaster, and February 29th at The Fire in Fishtown. You can get their full tour itinerary at Bandcamp, and if you listen through the entire Key Studio Session via the XPN Player below, you’ll hear two bonus songs from Past Life at the end: “North Brother” from their 2018 record The Loudest Sound, and a brand-new, as-yet unheard song called “Trigger Finger,” rockers both.

Check it out below, and watch Molly Drag perform “Out Like A Light” backed by Past Life, via NPR Music’s Live Sessions.