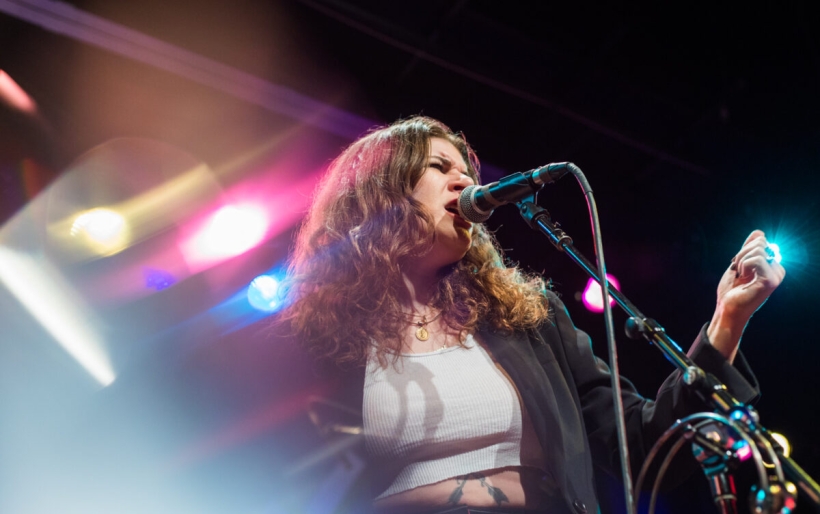 “This is our first record in five years,” Bethany Cosentino told a sold-out World Cafe Live today. “Which is nuts.”

She was referring to Always Tomorrow, the fourth Best Coast LP that releases in two weeks and that the Free at Noon audience was getting an early taste of. Five of the eight songs they played came from the new record, and while the band spent their previous releases perfecting the euphoric sunshiney pop that came to a peak on 2015 with California Nights, these songs delve into another element of their home state’s sound — gritty, badass rock and roll.

“Everything Has Changed” has a Joan Jett-esque knockout punch while delivering an ode to adulting: the central character’s life was previously all about whiskey and tears, but “Now I’m cooking for two / Now I’m waking up every morning next to you.”

“Graceless Kids” was another hard-hitting rocker — and Cosentino annotated her setlist to remind her not to drop certain lyrical bombs as it unfurled — while the slippery low-key groove of “For The First Time” is a dance jam that echoes themes of walking head-on into maturity: “On Friday nights I don’t spend too much time lying on the bathroom floor, like I used to / The demons deep inside of me, they might have finally been set free.”

Some back-catalog faves brought some of that California sun to what had earlier been an epically rainy Philly afternoon — “The Only Place” from the 2012 album of the same name was a crowd favorite, and California Nights opener “Feeling OK” elicited some excited gasps from fans up front. Alongside Best Coast co-founder Bob Bruno on guitar, the older jams were given fresh life by keys player and guitarist Joe Bautista, bassist Brett Mielke, and drummer Dylan Wood.

But the star of the show — aside from the effortlessly cool Cosentino, of course — was the new material and its pensive profundity. The “trippy weird psychedelic” jam “Rollercoaster” landed towards the end of the main set and pondered the downside to growth and maturity: the ever ticking clock of mortality. “My best friend is getting older right before my eyes, and I can’t stop him from disappearing,” sings Cosentino. “All I can do is try.” Wow.

Check out a gallery of photos and listen to an audio archive from today’s Free at Noon concert below; Always Tomorrow is out February 21st, and can be pre-ordered here.