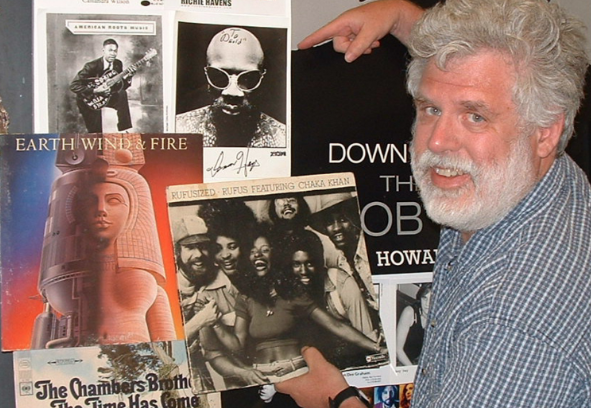 DJ David Dye is stepping down from XPN’s Funky Friday

After 25 years of bringing the funk to WXPN’s airwaves every week, David Dye announced he’s stepping down as the host of Funky Friday this month. His final show airs Friday, February 28, from 4 to 7 p.m. ET; Funky Friday will continue each week with Dan Reed and other hosts, while Dye will continue hosting Dave’s World on XPN every Sunday from 11 a.m. to 1 p.m.

Funk has been a longtime musical passion for Dye. Before he came to XPN, he hosted the Friday Flashback on Philly radio station WIOQ, where he showcased equal parts 70s soul, 60s pop, and party music from the 50s. That show started in the early 80s, and grew into a weekly live broadcast and dance party from West Philadelphia’s Chestnut Cabaret nightclub.

After launching WXPN’s World Cafe in 1992, Dye took the wheel on Funky Friday in 1995; the program had been going for a couple years since DJ Elise Brown started it in the summer of 1993. In the time since, Dye has hosted close to 20 Funky Friday dance parties all around the greater Philadelphia community, and joined funk favorites like Dr. John and Trombone Shorty in conversation on the World Cafe.

“Considering I have been ‘Mr. Friday Night’ since the early 80s with The Friday Flashback on the old WIOQ and for the last 25 years here on XPN, it’s time to hang up the headphones and give someone else a chance to mix it up!” Dye says. “I thank fans of the show for your support over the years and I will certainly miss being live in the studio Fridays.”

When Funky Friday celebrated its 25th year on XPN in 2018, Dye compiled a playlist of funk essentials — take a listen below, and join the party for his final times hosting the funk on XPN February 14th, 21st, and 28th from 4 to 7 p.m..