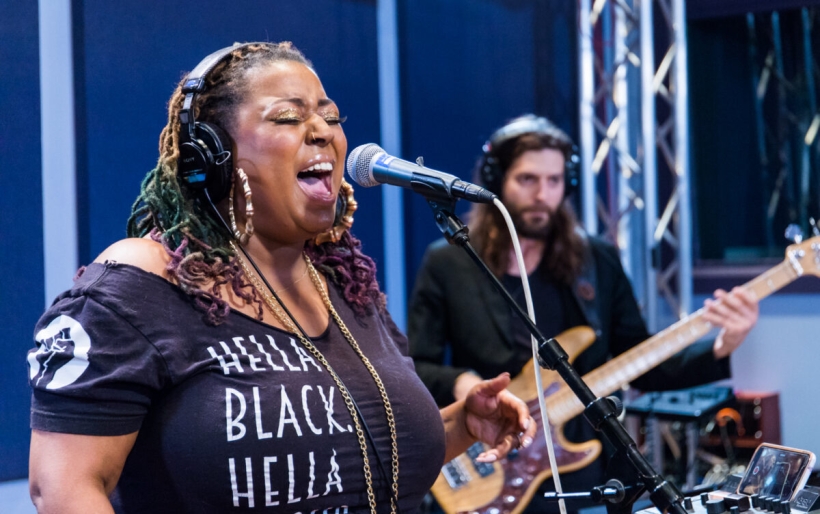 If you’ve made the rounds in the Philly music scene, you’ve probably run into singer-songwriter Fawziyya Heart at one point or another. She’s sang with Worldtown Soundsystem, accompanied percussionist Pablo Batista, and hosted a series of open mic shows called The Heart Beat at venues like The Boom Room and Bourbon and Branch.

Last year, Heart stepped out as a solo artist with her debut EP, Living Here to Change. Recorded with Trap Rabbit’s Logan Roth and Philly icon Chuck Treece, the songs on the EP touch on emotional tribulations (the driving, gospel-tinged rock of “Still Trying to Bear”), the fight against systemic racism (the infectiously funky “Hands Up”), and introspection about finding your place in your community, city, and world (the title track).

For this week’s Key Studio Session, Heart plays all three of those songs, plus the smooth soul burner “You Send Me,” a tribute to Sam Cooke, with an incredible six-piece backing band.

Joining her are drummer Barb Duncan, trumpet player Eli Monroe, sax player Darryl Bennett, bassist Ken Vincent, keyboardist Anam Owili, and guitarist Sonni Shine. Watch them rock a powerful performance of “Still Trying to Bear” via NPR Music Live Sessions below, listen to a Soundcloud archive of the full studio session, and catch Heart in person at one of her upcoming gigs.

Tonight, she hosts The Heart Beat at Bourbon & Branch, on February 22nd she plays Green Soul in Fairmount, on February 29th she’ll be at Hops Brewerytown, and on March 9th she plays Kung Fu Necktie with Camp Candle, Jennifer Hall, and Emily Drinker. Details can be found at the XPN Concert Calendar.