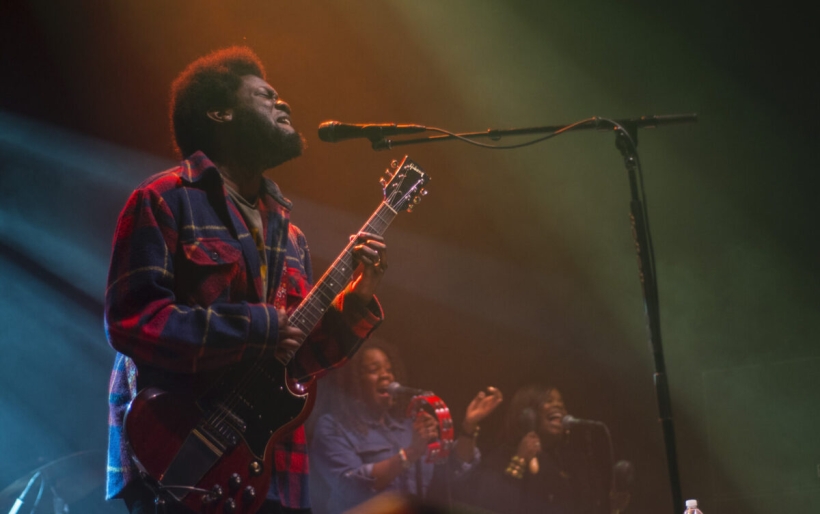 Michael Kiwanuka took the Union Transfer stage and seemed all too comfortable in front another sold out crowd on his U.S. tour. “Piano Joint” started the show with a gentle plea that grew into grieving love song which, as emotionally confusing as that sounds, seems oddly familiar. Flipping back and forth between songs from 2016’s Love & Hate and 2019’s Kiwanuka, they familiarized old fans with newer material and vice versa.

Kiwanuka’s live band was adept at capturing the sound of the album, and his voice pristinely conveyed the nostalgic, gravely sound of an old record, complete with a few minor scratches that only endeared me to him more, being a bass in a tenor’s world. Background singers Simone Daley Richards and Emily Holligan Richards stood out as powerhouse vocalists, the latter of which was given room to shine on the song “Rule The World.” As usual at venues this size or larger, songs that start with participatory clapping, “Black Man in a White World,” tend to devolve due to audience adrenaline until the drummer comes in. The irony of the incongruity of clapping was not lost on me.

There was no Michael Kiwanuka merchandise for sale that night, but the crowd definitely got their money’s worth, although one very excited audience member near the back bar had to wait too long for his favorite song and was almost disappointed. “If he doesn’t play ‘Cold Little Heart,’ I’m not going to work tomorrow.” I’m really glad that guy made it to work.

Utah based Sammy Brue opened the show performing songs from their upcoming album Crash Test Kid. Accompanied by Kip Congo on bass and stomp box, the duo’s sound straddled the lines between 2020 Americana and heartfelt indie-blues, evoking Nirvana and a wealth of old country / folk artists that he should be too young to know about.

Songs like “Paint it Blue” and “Fishfoot” (written in a more “psychedelic” time in his life) sound great as a duo, but leave you wanting to hear the produced track. The album’s singles — the aptly named “Teenage Mayhem,” and the sweetly melodic “Crash Test Kid” — were great choices to front the set, appealing to both the manic and depressive in us all.