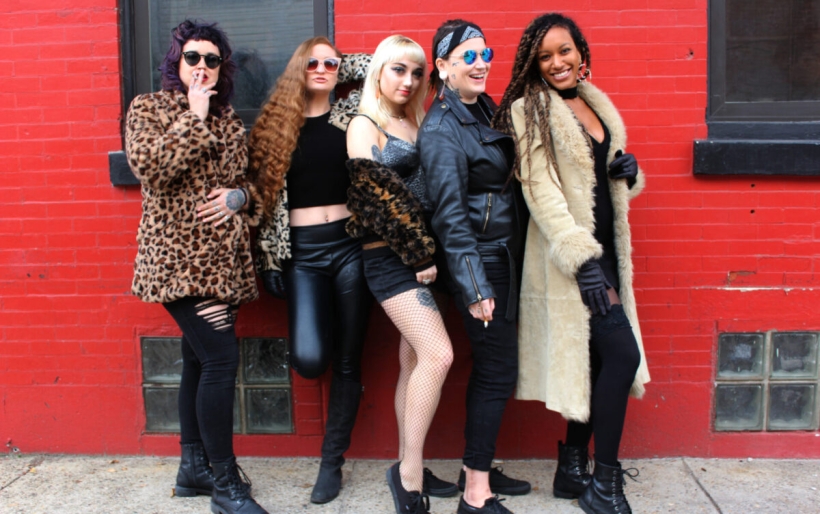 Vixen 77 | photo by Nicole Osnato | courtesy of the artist

We had our first encounter with Philly rock five-piece Vixen 77 last Thursday night at Ortlieb’s, where they played an explosive set opening up for the first week of Queen Vice’s Royal Residency.

As became quickly obvious, the 77 in the band’s name is a nod to ’77 punk, and their set packed enough Ramones ONETWOTHREEFOUR count-offs and blistering bar chord riffs to kickstart even the most dazed attendee’s pulse. But that’s just one element of the classic heavy music this band channels: they also make nods to The Runaways and The Stooges, their logo is styled in the spirit of Holly metal bruisers Ratt, and both those elements give you a solid sense of what to expect. Vixen 77’s playing is loud and tight, and their presence unhinged but magnetic.

Fronted by spirited vocalist Halle Clouser, the band is comprised of guitarists Caitlin Walker and E.A. Cartwright, bassist Jaz, and drummer Mare Lemongelli. It debuted with a self-titled self-release on Bandcamp a year ago, and it’s well-produced for a first EP — the right amount of right amount of polish, the right amount of fuzz, and enough attitude that it could have played well on Warped Tour if the Warped Tour universe had actually embraced non-dudes in the scene.

At the same time, that three-song set leans a bit too heavily into the template of the band’s influences, particularly on the opening oi oi oi theme song. Which was totally fun live, don’t get me wrong. I just always find myself more interested when an artist isn’t playing so heavily into the familiar, and with Vixen 77’s new single, we see them developing their own voice a bit more, branching out while still continuing to embrace the retro-rock style that’s propelled them this past year.

“Little Witch” is built around dueling guitar arpeggios — one distorted, one clean — moving to a swinging beat while Clouser’s vocal delivers a yearning 50s melody. It’s like the Grease soundtrack fed through a stompbox during the verse and chorus, while the bridge takes the song into brooding modern rock territory, and Clouser uses ominous imagery about knives and violence and the occult to sing about finding a person who makes you feel comfortable and able to let your guard down in a wicked world.

Take a listen below, and also give Vixen 77’s recently-released “You Gotta Go” music video a watch; it provides a window onto the band stylish sensibilities and their sense of humor.