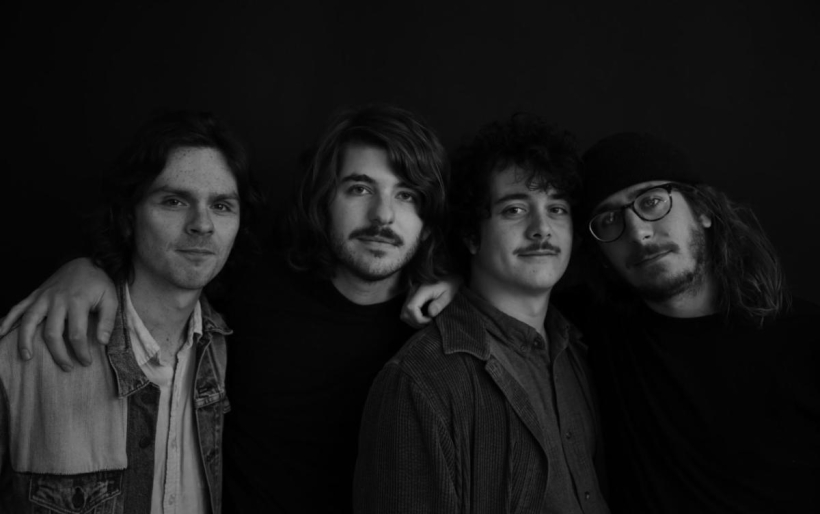 The Districts | photo by Shervin Lainez | courtesy of the artist

Philadelphia rock four-piece The Districts releases its latest album, You Know I’m Not Going Anywhere, on Friday, March 13th via Fat Possum Records, and have teased the record with the the soaring drama of “Hey Jo,” and the dark dance jam “Cheap Regrets.” Their new single, “Velour and Velcro,” finds a balance between the two worlds.

The propulsive anthem is a meditation on the impermanence of happiness — it’s something you yearn for, that you believe in, but that disappears just as quickly as you find it. Singer-guitarist Rob Grote describes the conundrum as “the elusive nature of bliss and how even when you’ve caught it, you know it may be fleeting.”

In a music video directed by Jake Lazovick, that sensation — chasing bliss, happiness, joy, or per Grote’s lyrics, heaven — is illustrated by breathtaking footage of him clad in a track suit, racing through the hills of Wissahickon Park, until he stops at the storied Cave of Kelpius, where a seventh century group of hermits and mystics gathered to wait for the end of the world. Grote fearlessly steps into the cave, which serves as a portal to the realm of memory and childhood; we see a younger version of himself jumping on a bed, thrashing around a guitar, and knocking over sports trophies, while his bandmates in present day ponder how to keep moving on.

Watch the video below, and see The Districts play You Know I’m Not Going Anywhere on the eve of its release, Thursday March 12th, at Union Transfer in Philadelphia. Tickets and more information can be found at the XPN Concert Calendar.