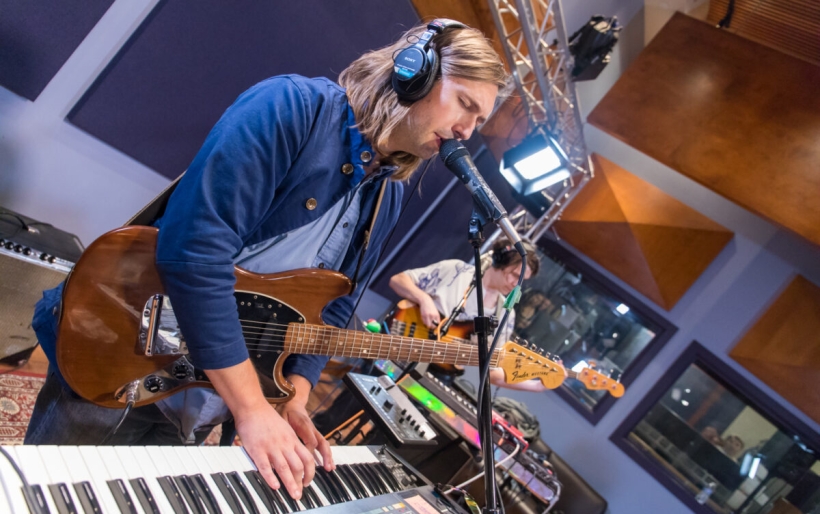 It’s been a little over five years since the indie pop four-piece Carroll made the move halfway across country, from the Minneapolis scene they got their start in to the Philly scene they now call home. It was a fitting journey — both cities have robust and supportive music communities that are also low-pressure enough for artists to grow at their own pace.

After releasing their dreamy debut full-length As Far as Gardens Go in 2016, recorded with Jon Low at Miner Street, Carroll settled into their new home with a party at The Barbary documented by The Key’s Noah Silvestry in the Load-In to Load-Out series. Several years of local and regional gigs followed, as well as the band expanding its network among its new Philly peers — guitarist Max Kulicke picked up a gig in American Trappist on the side — and here we are, in 2020, with Carroll’s latest release, Leap and the Net Appears, out this month on Shattered Orb Records.

The title could be taken as a positive lesson learned by the chance Carroll took moving east; once out of your comfort zone, your path presents itself. For the band, that sonically means idiosyncratic, smooth synthesizer jams in the spirit of Vacationer and Toro Y Moi, all the way back to Steely Dan.

For their Key Studio Session, Carroll — comprised of Brian Hurlow on keys, guitar and vocals; Kulicke on lead guitar; Charles McClung on bass; and Charlie Rudoy on drums — performed a set of chill, charismatic songs from the new record, leading off with the single “Fern” and working their way through the more prog-pop oriented “Nona” and “Amaranthus,” ending on the sound-effects speckled “Whip,” which you can watch the band perform in below via NPR Music Live Sessions.

Carroll celebrates the release of Leap and the Net Appears on leap day eve — that’s Friday, February 28th — at Johnny Brenda’s, with The Vernes and Strawberry Runners on the bill as well. Tickets and more information can be found at the XPN Concert Calendar.