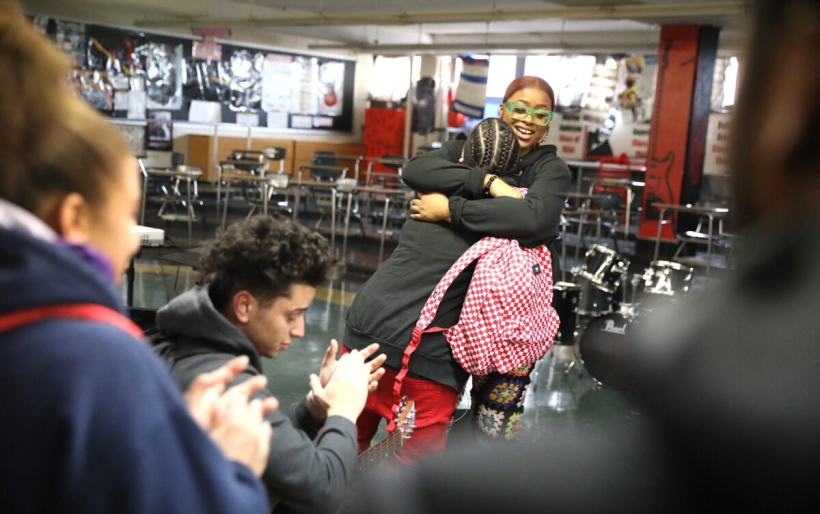 In the spring of 2011, 15-year-old rapper and Arts Academy at Benjamin Rush student Tierra Whack (then known as Dizzle Dizz) was riding along in the car with her mom on their way to visit her grandmother. Upon noticing a group of young men crowded on the corner of 18th and Oxford rapping and filming with a digital camera, Tierra’s mother would give her gifted, eccentric child a nudge that would change her life.

“We were riding and we both look and see this big group of guys with a camera,” Tierra remembers.” This was in the middle of the hood in North Philly, you see guys with a nice camera, something’s gotta be going on and it’s not the news.”

The group on the corner was Philly’s We Run The Streets crew, a media company that gained notoriety in the city for filming cyphers and independent films. At mom’s urging, Tierra reluctantly agreed to get out the car and rap for the camera. The freestyle that Tierra would spit, dense-poly-syllabic and full of slick, comedic punchlines-would blow up the week it was released, captivating the city’s local Rap community and setting the stage for Tierra’s future stardom.

Fast-forward to 2020 and 24-year-old Tierra Whack is one of the brightest lights in popular music. She still delivers her bars at a furious, virtuosic clip and her music has grown to accommodate her ear for catchy, bittersweet melodies and deceptive lyrical metaphor. In the past 9 years since the We Run The Streets freestyle, we’ve witnessed that quirky 15-year-old  evolve into the architect of a vivid and colorful musical world.

In an effort to give back to the same Philadelphia public school community that she grew up in, Whack in partnership with popular skateboarding and street apparel company Vans has pledged musical equipment and a 10 thousand dollar grant to five Philadelphia public high schools.

On Thursday, February 20th, Tierra embarked on a to each of the 5 schools-Samuel Fels High, Frankford High, Philadelphia High School for Girls, John Bartram High, and South Philadelphia High.

The Key was able to attend the South Philadelphia High event and speak with Tierra about the collaboration with Vans and its significance. “I always want to be able to give back to the community,” Whack said. “It’s just like a surreal moment to be standing in front of these kids and giving something because I remember when I was just like them.”

After presenting the musical instruments as part of an assembly in front of the entire student body gathered in the auditorium — an event which included a group of budding rappers from the school taking the stage for a freestyle, and a teacher jumping into the cypher at one point — Whack linked up with a group of music students and teachers to visit their instruction and recording space.

Even in the face of budget cuts to the school district’s creative arts programs, South Philly High has carved out a wing of its second floor to keep its music instruction going — a space where the instruments donated by Whack and Vans will find a new home. The three rooms included a recording booth and a digital audio production setup, a small practice room filled with an assortment of older instruments, and a larger room for group rehearsals. Whack followed the students from room to room, taking in the facilities and posing for quick pictures with the students.

In the larger group room, Whack encouraged one of the students — whose peers had spoken about her talent but who was shy about performing — to take a moment to sing for everyone. Accompanied by a friend on acoustic guitar, the student delivered a moving performance of a Spanish language song with a poppy, emotional melody while Whack sat and listened intently.

A round of applause followed, and Whack joked that while she couldn’t remember the Spanish she studied back in her high school, she still connected with the performance. “I couldn’t understand what you were singing, but I could feel it,” Whack told the student. “Don’t be shy [about singing], keep doing what you’re doing.”