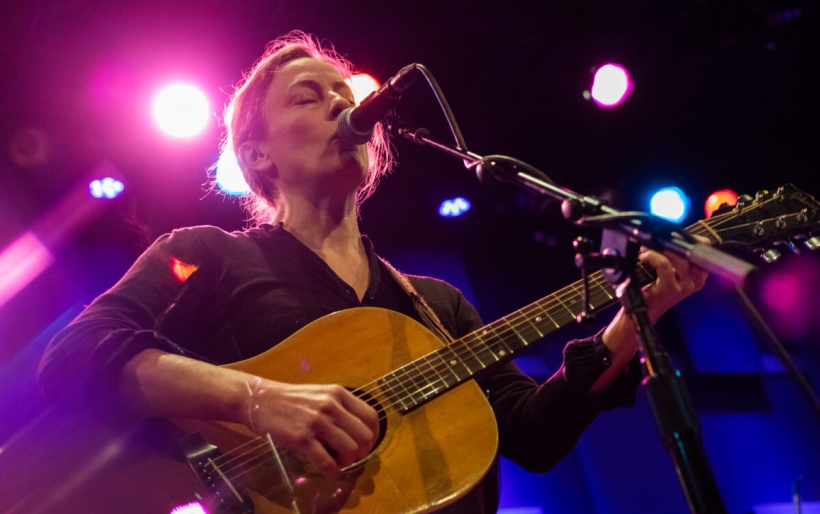 After her show at World Cafe Live last night, Sarah Harmer stuck around Philly this morning to play Free at Noon before she continues on her tour. Harmer released her new album Are You Gone just last week — her first release in a decade — and shared songs both old and new with today’s crowd.

“I spent 10 years just hanging out at home,” Sarah Harmer joked, but the Canadian singer-songwriter never fully stopped writing music in the time since her last album was released, in 2010. She’s also focused a lot of her energy on environmental activism, and her appreciation for the natural world and all that threatens it permeates her new songs, resulting in an album that is as political as it is personal.

There was a bit of nostalgia in the air during Harmer’s set — the crowd broke into a cheer when she began to play “Basement Apartment,” from 2000’s You Were Here — but her new songs are better reflections of where the songwriter is at this point in her career. “New Low” was inspired by Harmer’s work fighting the fossil fuel industry, and it calls upon listeners to stand up — not just to dance, but to fight the injustices they see in the world. “What I Was To You” was written for the late Gord Downie, while “See Her Wave,” which Harmer closed with today, is a tribute a friend who’s passed away. She indulged the audience’s cheers for an encore, playing the older favorite “Late Bloomer.” Revisit Sarah Harmer’s set in the photos below.