Voices of Liberation: Get to know the Trust Your Moves queer community choir - WXPN 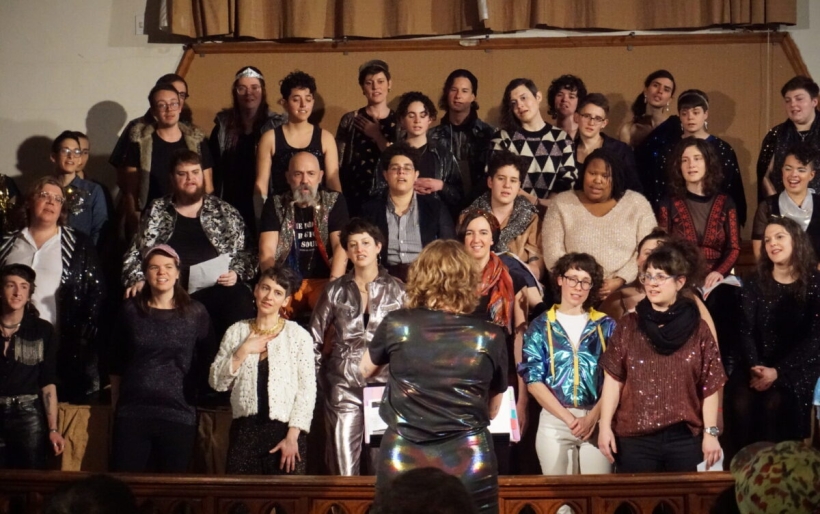 Trust Your Moves | photo by Yoni Kroll for WXPN

Voices of Liberation: Get to know the Trust Your Moves queer community choir

Everybody sings. It’s one of those few universals that unites literally everyone around the world. We sing because it’s fun. We sing because it’s comforting. We sing because when it comes down to it it’s downright pleasurable and awesome to scream along to your favorite track. Sure, maybe nobody heard you belting out the chorus to that Taylor Swift song in the car this morning, but the best thing is that nobody needed to hear that but you. Even if your own voice isn’t the best, it’s still very much your own.

Trust Your Moves is all about that feeling. The West Philly-based chorus was formed two years ago to be, as their website states, “a queer community singing group devoted to performing new work by Philadelphians.” While choral music is historically gendered – even if it’s not exclusively a ‘men’s choir’ or a ‘women’s choir’ the internal structure is oftentimes broken down by gender – Trust Your Moves uses gender neutral language to describe voices, classifying singers by high and low parts.

“In terms of language and how our group is organized, the idea of gender liberation and a gender-liberated singing space is at the core of what we’re doing,” founder and musical director Emily Bate told The Key. “Having a lot of trans and non-binary friends, I was just really aware that there wasn’t a really good alternative if people wanted to sing in a choir but didn’t feel comfortable in like a super gendered space, or even in a space where it might be okay to be trans or non-binary but not, like, center to the project.”

At its core the choir is inherently a queer organization. “We’re called a queer community chorus and that’s central to the values of this project and who’s making decisions, who’s getting paid [for their work and music], whose voices are being represented in the music we perform,” she explained. “It’s also like expansively queer in that the membership is a real range of identities. It’s a queer-centered space in that anyone who needs to be there can access it.”

There is an emphasis on meeting singers where they’re at, regardless of musical ability or experience. There are no tryouts or auditions to join, anyone who wants to can be a part of the choir. That’s something that has made Trust Your Moves “truly for everyone who needed to be there,” according to Bate. It is also quite unique: out of all the secular choirs in the city it seems like Trust Your Moves and the Philadelphia Women’s Slavic Ensemble are some of the only ones that don’t require members to audition.

“It turned into a space that people are really coming to for healing reasons,” Bate told The Key. According to her, that includes those who have been told they can’t sing or have the perception that “they’re not allowed to or shouldn’t sing.” As she put it: “The really common thing that I hear all the time is ‘you don’t want to hear me sing’ or ‘nobody wants to hear me sing.’ I hear it so often that it’s actually a pretty powerful current of the way we’re conceptualizing a general cultural trend around how art should be made by experts and everyone who’s not already good at it should just buy it.”

Because of all that, Trust Your Moves has become more than just a choir. That was clear at their winter recital where more than 60 singers performed to a packed house both nights at the Calvary Church in West Philly. This is very much a community, audience included.

That’s something that’s inherent to choral music, according to Bate. “The physical experience of singing with people, that affects us on a physiological level,” she said. Add in the sheer number of people who fit into the main room at Calvary and you have what she described as feeling, “very magical, like a little alternate dimension when we rehearse and definitely when we’re performing and we add in that other three hundred bodies into the mix.”

Bate has been involved in choral singing all of her life. “I love the scale of it, how big it feels,” she said. “It’s so opposite of most of our familiar musical experiences in life.” While at traditional choral performances the audience is not usually asked to sing along, at Trust Your Moves recitals participation is encouraged. According to Bate, “We always sing with the whole audience at every concert. I think the experience of [sharing in] the electricity of a bunch of people taking real risks to be up there on stage and doing it makes it such an enjoyable audience to be in. It feels real alive.”

The music performed by Trust Your Moves is a mix of pop tunes and more experimental stuff. The winter recital showcased songs by Arthur Russell, Beverly Glenn Copeland, Janelle Monae, and local bands Thunder Thighs and Hermit High Priestess. Bate told The Key that building a repertoire that focused on queer musicians was one of the reasons she started the group.

Anna Young is the singer of Hermit High Priestess and someone who has performed with the choir in the past. “It was a delightful privilege to hear a Hermit High Priestess song sung by a large group,” she said. “It was really a treat to arrange this piece with [HHP drummer] Dani. I felt humbled and deeply flattered hearing it.”

Young is also a classically-trained vocalist with a lot of choral experience. According to her, “As someone who has primarily existed happily as a solo artist and is currently in an emotionally close-knit two piece, I’ll say that singing in a group is a full body experience like nothing else when it works.”

Being able to bring music from queer musicians of previous generations – oftentimes referred to as ‘queer ancestors’ – to a modern audience is something that’s integral to the mission of Trust Your Moves. Bate brought up the inclusion of the Arthur Russell song “Time Away” in the winter recital as an example of this. While Russell has certainly gone through periods of greater popularity, the late cellist and composer is still not that well known, even in the queer community.

“It’s easy to be disconnected from people who came before you,” Bate explained. “It’s also easy to have tense inter-generational conflict. There’s also political struggles about what language we’re using, who’s involved, [and] who’s left out that can be sites of conflict for queer people.” While most of the singers in the choir are, like Bate, in their 30s, members range in age from early 20s to 60s.

As choir director Bate not only has to choose the songs but also arrange them for a 60+ person chorus. She stressed that it’s important for the compositions to be presented in “our own contemporary way” while also being accessible to everyone regardless of skill level.

Asked about songs she’d like for Trust Your Moves to perform in future recitals, Bate said, “I really want to do a HIRS song. I just love her lyrics so much and I love the contrast [with the music.]”

If you’re not familiar with HIRS – the Philadelphia band describes themselves as “TRANS, QUEER, anti-authoritarian, bullshit thrash with PUNK ethics to destroy capitalist misogynist scum and empower WOMEN, POC, and the LGBTQIA community” on their Facebook page – their average song is about a minute long and exceptionally discordant. This is in no way traditional choral music, not by a longshot.

Taking singer Jenna Pup’s lyrics and the melody of these songs and presenting them in a radically new setting appeals to Bate both as a fan of the band and as a choral singer. “I love the idea of us doing things that feel like radically outside the scope of what a choir would ever do,” she explained. It would also go right along with Trust Your Move’s goal of performing music from local artists.

West Philly resident Kelsey Cloonan attended the winter recital and has been considering joining the choir. For her the concert was “one big celebration of joy,” she told The Key. “Joy in being, joy in singing, joy in feeling a part of something. Even in the audience, I felt a part of something – I don’t know if it was West Philly, queerness, love of song, or all three, but watching it, I felt wrapped up in warmth and possibility.”

That Trust Your Moves manages to be both a chorus and something very much more than that is testament to the work put in by all the musicians and especially Bate. Watching the recital it was easy to sense the obvious adoration of the audience for everyone performing and indeed everyone in the building. At the conclusion of the concert one of the singers presented Bate with a bouquet and thanked her for creating what they called a “community space for queer joy,” echoing Cloonan’s comments.

Supporting the choir is important for Cloonan because it “reflects the kind of world I want to live in, where no one cares if you’re ‘good’ or ‘bad’ at something, all that matters is that you want to do it. … We’re not taught that it’s okay to be bad at something, so it can be scary as hell to try something new or that we’re unsure of. But spaces like Trust Your Moves turn that bullshit on its head, take all that brave vulnerability and turn it into something beautiful.”