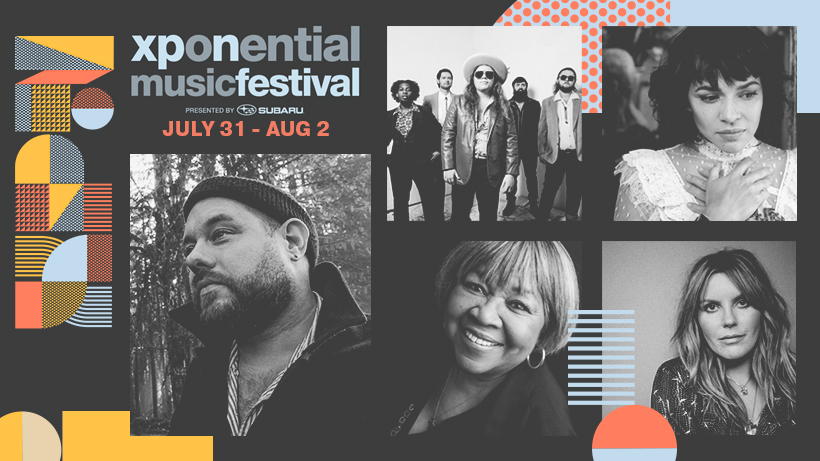 Rateliff will be joined by Potter and blues-tinged rockers Marcus King Band at BB&T Pavilion in Camden on Saturday, August 1st, while Jones and Staples, along with Black Pumas, play BB&T on Sunday, August 2nd.

As always, XPoNential Music Festival kicks off Friday, July 31st with a full day at Wiggins Park on the Camden Waterfront, and will feature daytime performances at Wiggins on Saturday and Sunday.

Among the highlights at Wiggins are beloved indie rock singer-songwriter Liz Phair, who releases her latest album Soberish this spring, as well as the power pop army The New Pornographers, and introspective singer-songwriter Citizen Cope.

Nashville’s Devon Gilfillian returns to the festival after a warm introduction on 2019’s bill, and Nicole Atkins plays her first XPNFest since 2014. Meanwhile New York City vocal-pop trio Bailen makes their XPoNential debut, along with Kansas City blues ripper Samantha Fish and Nashville singer-songwriter and Michaela Anne. Adding to the rootsy mix of this year’s lineup will be Brooklyn’s Ikebe Shakedown, with their instrumental soul and funk jams.

Another set to watch is Paul Beaubrun, a New York singer-songwriter of Haitian descent who participated in Jackson Browne’s recent LP, Let The Rhythm Lead, a benefit for the Artists for Peace and Justice nonprofit, which helps those living in poverty in Haiti and around the world

And on the local music front, this year’s XPoNential Music Festival lineup features 80s rock favorites Tommy Conwell & The Young Rumblers, as well as the lively modern rock / roots crew Stella Ruze (on the heels of their 2020 release The Greater Dog), the ethereal electronic jam pop trio Great Time, and the dynamic Arthur Thomas and the Funkatorium.

Three-day passes and single day tickets go on sale Friday March 13 at 10 a.m. WXPN Members receive discounts of up to 50% off all passes that include access to Wiggins Park.  The 3-Day Go Everywhere Pass is available exclusively to WXPN Members through July 9th. Details can be found at XPNFest.org. Below, explore the full lineup, and check out music from some of the performers.