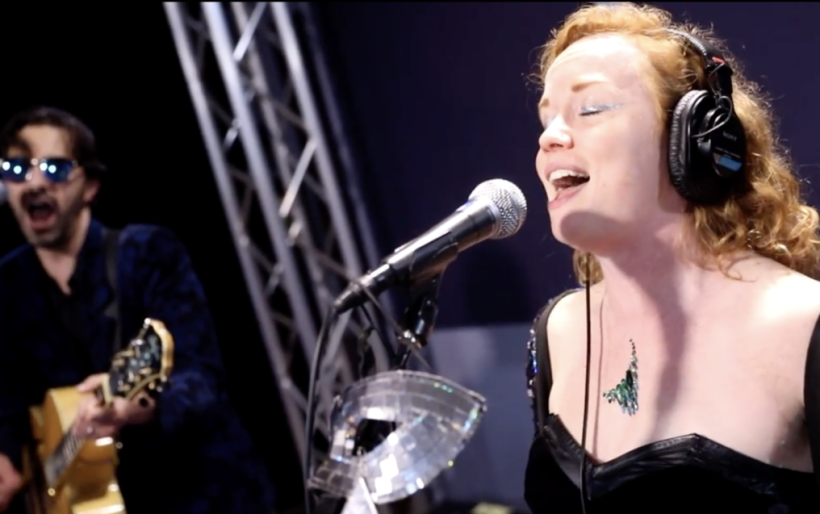 Philadelphia art rock ensemble Upholstery straddles the worlds of Portishead and Tom Waits, as far as eclectic sounds and character-driven songs go. If you’ve ever seen them live, it should come as no shock to you that the band has a background in the local theater scene as much as the music scene, composing music for and performing in local productions at spaces like Plays and Players and events like Philly Fringe.

On the latest episode of the 25 O’Clock Podcast, host Dan Drago talks about straddling those two worlds with the band’s singer Kate Black-Regan and songwriter / guitarist Jeremy Prouty.

They discuss growing growing up in rural burbs — Prouty in Nebraska, Black-Regan in SOuth Jersey — and gravitating towards creative scenes in various cities (ultimately Philly). They contrast making music for theater productions (which Upholstery violinist and Prouty’s partner C.W. Kennedy often writes book for) with making rock music, and how word games and free-associative activities often kick-start their creative process.

We hear Prouty reflect on how, despite Upholstery’s very theatrical sound, these are the sorts of songs he’d be writing anyway, even if there wasn’t a production attached to them. “I was writing really weird songs about really weird characters before ever doing a theater show,” he says. “I think [those ideas] live together.”

Black-Regan talks about her view of using performance — whether at a club gig or theatrical production — in a way that it also lends itself to therapeutic work.

“I’ve come to understand music and theater and expression comes hand in hand with healing and processing intense life stuff,” she says. “I find those two to be married together and transformative.”

They also talk about staying on top of performance spaces in the city, indie music as much as theater troupes, and played acoustic versions of two songs: “Constrict The Craw” and “Till The Swarm.” Listen below.

Upholstery released its album INGA on Exotic Fever Records in 2019; more information can be found here.