Isolation Drills: The best quarantine happenings we saw this past week - WXPN 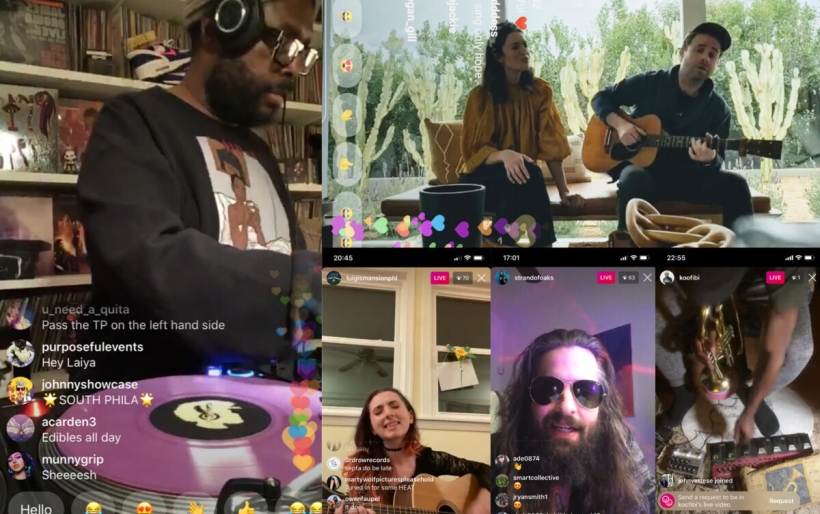 Isolation Drills: The best quarantine happenings we saw this past week

We’ve learned a lot over the past seven days about how to experience live music when you can leave your house. Last week, the idea of livestreaming shows from an artist’s home to our own felt novel; this week, it’s the new normal, and we were catching three or four performances per day. Here’s some of the best things we saw.

The biggest thing that had us all huddling around our smartphone screens, laptops, and bluetooth-enabled televisions was concerts — intimate, unfussy, living-room performed gigs that found artists loosening up with production values and opening an intimate line of connection directly with their fans.

The first of those that we watched this week was by Philly native Attia Taylor of Strange Parts, who performed a set of new sound loop oriented songs from her Brooklyn apartment while an ever-flowing montage of video imagery projected on the wall behind her. Taylor used her short and sweet set as an opportunity to raise $150 for a local food bank in her New York neighborhood.

From there, we had a ridiculous amount of options. The launch of Isolation Sessions brought musicians from Philly’s indie scene into our living rooms via a variety of platforms. A Thursday night hang with Katie Crutchfield of Waxahatchee and her partner Kevin Morby was one of the more heartwarming things we’ve seen, and the two artists have a very genuine and endearing musical rapport with one another — Morby fanboying out about Crutchfield’s new album Saint Cloud and backing her up on “Lilacs” and others, Crutchfield doing the same accompanying Morby, both teaming up on covers from Silver Jews’ “Random Rules” to Everclear’s “Santa Monica.” We also loved their earnest friendliness with fans, one of whom was a performer from England named Leon O who asked to jam on Morby’s “Congratulations” (which they obliged) and also asked to open for him in London (to which Kevin responded “DM me”). They plan to go live again this Thursday from Katie’s account, the eve before Saint Cloud releases.

Strand of Oaks‘ Saturday hang opened with a 10-minute improvisatory acid jazz excursion that frontman Tim Showalter said was a throwback to the electronic music he imagined as an Indiana teenager he’d be making some day. (A note to festival organizers: When we’re on the other side of this thing, pls book Oaks for a band set as well as a DJ set.) Harmony Woods‘ Sofia Verbilla gave an acoustic performance for just over a half hour via the Instagram of West Philly DIY space Luigi’s Mansion, a lineup to make up for a show that got cancelled; they’ll be back next weekend with a lineup of Origami Angel, Niiice, Willow Hill Motel, Heckdang.

Sunday afternoon, many fans of Hop Along’s Frances Quinlan were surprised to see a notification pop up that she was going live; it was a short, impromptu set featuring her solo song “Piltdown Man,” Hop Along’s “Some Grace,” and a cover I didn’t catch the name of. It was a test run, and Frances says she’ll give advance notice before the next one.

DJ sets were also in effect in a big way; we told you about Cosmo Baker’s rager last week, and his followup was equally stellar. The Law’s Lair parties with Philly DJ Matthew Law were reliably awesome, and Roots drummer Ahmir “Questlove” brought QuestLover’s Rock to the Gram Sunday night. When I tuned in, it was in heavy dub bliss-out mode, which was a nice way to cap a weekend of not leaving the house. I switched streams before checking out for the night and watched Key contributor and local trumpeter Koof Ibi Umoren playing a set of horn loops and freewheeling solos that he really needs to record in EP form if he hasn’t already. (Amusingly, I saw Philly impresario Johnny Showcase pop up in the comments of both Quest’s stream and Koof’s stream. “I support all Philly legends!” he commented.) Koof plans on keeping the livestream project going daily, usually around the happy hour window of 3 to 7 p.m. ET from his Instagram.

And of course an incredibly delightful set came Friday afternoon at 4 p.m. when Mandy Moore and her husband Taylor Goldsmith — of XPN favorites Dawes — took to Mandy’s massively popular Instagram for an acoustic performance. Moore just released her first album in eleven years, Silver Landings, and was scheduled to tour the U.S. with Dawes as her backing band (their March 21st show in Atlantic City is being postponed). For the show, they traded off between Moore’s songs and Goldsmith’s songs, chatted with fans, and shows lots of love for their cats and dogs who made appearances on the feed. They will return to Instagram this Friday, time TBD.

One of the best ways we’ve seen artists making their forced time off work for them is by giving virtual instrument lessons and tutorials. Some of these are in more of a one-on-one class session — Dominic Angelella and Jen Pague of Vita and the Woolf both using social media to promote their teaching-for-hire gigs via Skype and other playforms — with other folks make workshops a part of their stream of public quarantine content. Maxwell Stern has been documenting his experience learning pedal steel guitar via Instagram stories, while Savan De Paul and Kilamanzego both gave insight into their creative process by sharing Instagram and Facebook live broadcasts of production sessions and tutorials. Fascinating stuff, but unfortunately it’s not archived — a lesson to make sure you’re staying on top of your fave artists’ social media feeds.

There’s no shortage of playlist curation in this time of so much downtime — check XPN’s Quarantunes playlists — and Philly DJ and experimental music legend King Britt is keeping an incredible, ever-updating playlist of chill isolation vibes for your headphone pleasure over at Spotify. The current lineup features Panda Bear, serpentwithfeet, Cat Power, Adrianne Lenker, Moor Mother and more. Listen below, and follow him at @KingBritt on all socials for updates.

The good folks at Cherry-Veen Zine are signal boosting their friends from the scene who have little to do but sit at home and play their instruments. Tunes from The Quarantine is two episodes deep as of this writing, and features Rachel Andie covering Big Thief’s “U.F.O.F.” and Joshua Chase Miller presenting a new tune called “Take Care.”

We’re doing our best to keep on top of live streams and other happenings as the quarantine continues, and you can check our Coronavirus reporting to see what’s happening. If you have any tips, please email them to johnv@xpn.org or Tweet me at @johnvettese. And while you’re here, and not out spending money on concert tickets, please consider donating some dollars to make sure your favorite venue is still there when the quarantine is over; Johnny Brenda’s in Fishtown, World Cafe Live in University City, and Underground Arts all have employee relief funds running that could use your support.