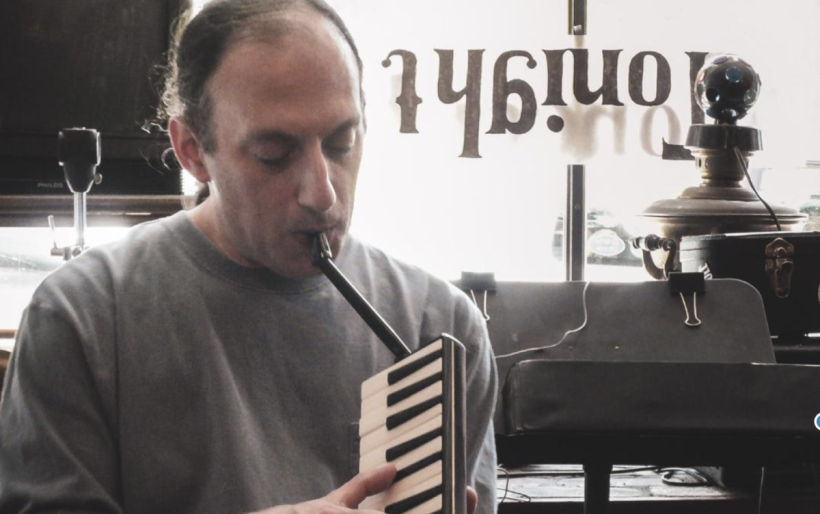 “Lee Schusterman was a musical character,” remembers Ben Arnold of his former bandmate.

Schusterman, a pianist and keyboard ace who performed with innumerable local artists — Kenn Kweder, Cabin Dogs, Four Lean Hounds, and any number of pick-up groups that jammed into the dawn hours at the Philadelphia Folk Festival campground — passed away Monday at his home in the Roxborough-Manayunk section of Philadelphia. He was 59 years old.

As word got around the music community this week, many of Schusterman’s bandmates shared remembrances of him on social media. Cabin Dogs wrote “Lee was a one of kind personality and loyal friend. Supremely talented on the keys, he played with many Philly area musicians over the years and made everyone around him sound better.”

Hambone Relay recalled jamming with Schusterman at Manauynk hangout Dawson Street Pub, a favorite spot of Schusterman’s, and said “You were truly one of a kind, and our nights…where you sat in could only be described as legendary. We miss you already.”

Arnold tells us that Schusterman played in his band for about five years, though the two have been friends for over 20 year. He remembers his devotion to the Grateful Dead (“as well as so many other jam-oriented bands”) as well as his skill with all key-related instruments. “He was also better than any of The Hooters on melodica,” Arnold says.

As Arnold tells us, “Lee possessed a very natural ear and could sit in with just about anybody, in any genre. He was an audiophile with a huge collection of live tapes of many  different bands. Both local and international. He knew how to get backstage or on stage with the best of them. He was a regular of the Fish Camp at the Philadelphia Folk Festival, often finding his way onto so many varying performers’ stages. He also tuned and repaired pianos and analogue electrical keyboards with a preference for Steinways and Wurlitzers. Often, mine.”

Longtime Philly rocker Kenn Kweder recalls seeing Schusterman in numerous Philly bands over the years, going back to the days of Ardmore Music Hall’s first incarnation, Cabaret East. They knew one another in passing — “his name was always around,” Kweder recalls — but a chance meeting at a gas station six years ago reconnected them and solidified their bond as friends.

“We were both getting gas, and he shouts ‘Hey, your f—in’ Kweder!'” he says. “From that day, we’ve always been in touch. He was like my long lost brother. We started doing gigs from that point on.”

Kweder says that they’d often play duo sessions at Dawson Street, or private parties, and were pranksters with one another — he remembers Schusterman as a witty person who he’d go back and forth with over hilarious text message chains, but he’d switch into musician mode at the drop of a hat.

“Whatever song I’d do, he’d be able to lock into it a split second behind me,” Kweder says. “He was a delight to play with, he had that vocabulary residing in his brain somewhere — folk, country, R&B, Led Zeppelin, commercial junk, whatever! His brain was like Einstein, he had such a broad spectrum of musical knowledge, and that’s something you don’t come across often.”

As a performer, he describes Schusterman as “a musical locomotive,” and recalled him playing gigs in Atlantic City, zipping back to Philly, and jamming with whoever was left at Dawson Street until 3 a.m.

Philadelphia bassist and singer-songwriter Phil D’Agostino echoes those memories of Schusterman’s drive. “He’d fly back from a gig in the Poconos or the Jersey shore to sit in on your third set,” he writes. “I didn’t know you could do two or three gigs a night until I met Lee.”

D’Agostino also remembers Schusterman as a mentor who helped him understand the hustle of the music industry, and says that his knack for collaboration and passion for playing were inspiring. “I was fortunate to be in a few bands with him, but like most of us, most of my musical interactions with him were late at night, playing in bands that didn’t have a piano player, and out of nowhere you’d hear piano, look over and see Lee.”

Schusterman is survived by his fiancée Jamie Carden, his mother June Neustadter and stepfather Robert Neustadter, his sister Tracey Schusterman and his niece Sofie Schusterman, as well as cousins Debbie Goodelman and Judy Friedman. Private services will be held at Rodef Sholom Cemetery in Egg Harbor Township, but the family says donations can be made in his honor to Congregation Shirat Hayam; more information here.