This & That Tapes brings cassette culture into the current - WXPN 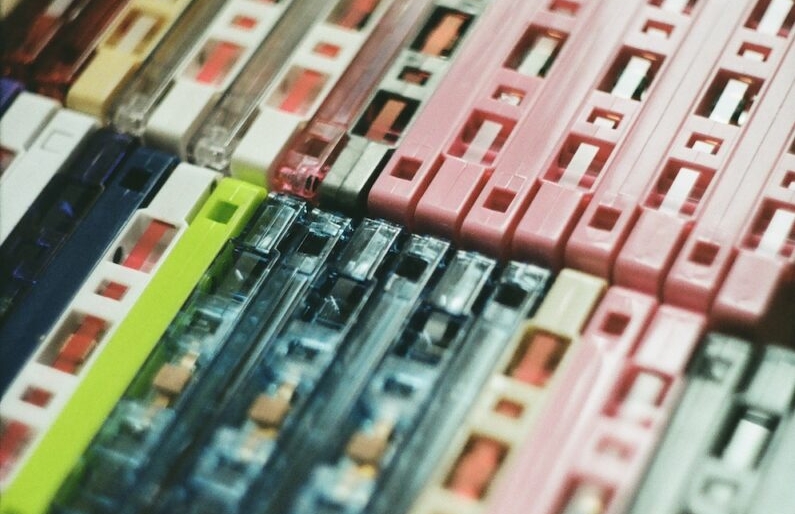 This & That Tapes | photo by Craig Wenner

This & That Tapes brings cassette culture into the current

The idea of having a zine and cassette label might sound quaint, like a throwback to the halcyon 90s when LiveJournal was the only form of social networking and photocopies were made with pirated Kinko’s cards. But there’s very little nostalgic about This & That Tapes and Displaced Snail Publications, the two imprints run by Joe Carlough out of the East Falls home he shares with his wife Katie Haegele, who is in charge of the 1,000+ zine library in the house.

Carlough has been around the zine and music scenes since he was a teenager and began making his own zines a dozen years ago. Appropriately enough, the first one he put together was a booklet for a mix CD. While Displaced Snail started soon after that, he didn’t begin to release music until last year.

For Carlough there’s a strong connection between zines and tapes: “When I got into this I was like, ‘What is a music medium I can do myself, that feels like a zine?’ And that’s just what cassettes are. It’s sort of like the zine of the music world.”

Since starting the label, he has released albums by musicians including locals Joe Jack Talcum, New Mysterian, and Strange Parts as well as Spencer Moody from The Murder City Devils, Estonia’s HUNT, and a number of others. He has also been making zines for a ton of bands over the past few years.

“The thing about the zine is that so much of what the zine is about is how it’s made,” he told The Key. “Even if you’re making a zine for someone else, it’s the maker who is determining what the paper is, how the colors look on the pages and things like that. It’s sort of analog – even though all paper is analog – but in a way books aren’t really analog anymore.”

While the label is new, Carlough has been involved in the production side of music for a while. In 2015, after running Displaced Snail for a few years, he began making what he described as “heavily collaborative zines in which I was more like an editor and a publisher than a writer.” That lead him to working with poets and then musicians.

According to him, “Once I started doing zine work with musicians, then I started working with record labels and then I was like, ‘Alright, now I know all these labels and musicians, maybe I should start putting out music.’ Then cassettes just sort of made sense.”

Although he didn’t start the label to put out his own music, Carlough is in a number of bands, some of which have come out on This & That. In fact, Gravy Train, his moon-themed folk four piece – really, check out the song below – did a split release with the Dead Milkmen’s Joe Genaro (aka Joe Jack Talcum).

“I agreed to work with This & That because I liked their attitude toward analog recording,” Genaro told The Key. “One of the stipulations of the project was that the songs be recorded on cassette tape, not digital. I still had a cassette 4-track recorder so I said yes, I’ll do it. I like their DIY spirit.”

Genaro has been consistently releasing out albums on cassette going back four decades to when the Dead Milkmen were first starting. It was something that was accessible and easy, from recording to duplicating to putting it out. His fondness for the medium is even mentioned on his Wkipedia entry.

“He’s someone who really loves and respects the cassette,” Carlough said. “I’ve asked him if he wants to do another album and he has mentioned that if he does another one he doesn’t want it to have a digital download it all, he just wants the cassette.”

Carlough is on a similar wavelength. He told The Key that he includes an mp3 with each release that is a straight rip of the audio off the cassette – including the natural hiss and pop of the tape – along with the ‘clean’ files. So even if you might not have a deck, you can still hear what the songs are supposed to sound like. As he explained,“The cassette is the whole point of the label and so the [digital] music sounds like it should on the cassette.”

The crossover between zine culture and cassettes is very much a given for Carlough. “The sort of person who’s gonna make their own music is probably gonna make a lot of things,” he said. “They consider themselves a doer. And so a zine naturally fits into that. It really feels like the same type of person who’s going to pick up a guitar would probably pick up zine and be like, ‘I bet I could make one of these, too.’”

That DIY attitude is also ubiquitous across the board. Making a tape – and a zine – even a professional-looking one like what This & That is releasing, is something you can do start to finish in your own home. As he put it: “I feel like zines are the ultimate way to make something yourself and be in total control of what it is. And so are cassettes.”

Carlough has also recently gotten into the experimental side of cassette culture with A Good Host, his synthpop project that includes drum machines, tape loops, and other circuit-bending physical manipulation. Not surprisingly he’s jumped right in and has already learned how to fix up old tape players.

The East Falls Zine Reading Room, the huge library in Carlough and Haegele’s home, is a collection of more than 1,400 zines on topics ranging from music to cooking to DIY projects and more. He referred to it as their “major life’s project moving forward.” They’ve hosted high school classes, held small living room-style shows, and even had a WHYY documentary on zines filmed in the space.

He stressed that this is very much a library, a living, evolving thing and not just an archive. “I mean, we have some old zines,” he told The Key. “We’re proud of some of the really old zines we have. But I think of it as being extremely modern, too.” Although zines started more than half a century ago and really had their heyday in the music and politics subculture of the mid-90s, they’re still extremely popular, especially when it comes to self-publishing and micro-publishing poetry, comics, and art. The always-packed Philadelphia Zine Fest – an annual event Carlough and Haegele have participated in for the past few years – is a prime example of that.

While he’s home, quarantined from his job at the Linguistic Data Consortium at the University of Pennsylvania where both he and Haegele are researchers, Carlough plans on building a home studio and working on a number of projects. Making zines and really just existing in DIY has given him a very can-do attitude when it comes to doing pretty much anything. According to him, “Now that I’ve begun slowly doing things for myself it really has opened up the world of, ‘Okay, making a zine isn’t entirely different from building a studio because it’s just a small set of instructions and you have to know how to read them right.’”

Or more succinctly: “To be in the zine scene is to be forced into DIY.”

One of those projects is a compilation tape and zine he’s putting together in collaboration with the Mütter Museum of The College of Physicians of Philadelphia. Although mainly known for a large collection of medical oddities, there has been a great focus on education and research there over the past couple years, including a recent – and unfortunately very timely – exhibit on the 1918 flu epidemic called Spit Spreads Death. Carlough referred to this as not so much a rebranding but a modernization of the scope and focus of the famed institution. The comp is tentatively set to come out in September to coincide with a number of events at the museum.

He got the idea for the tape, which will be entirely made up of songs about the Mütter by a number of different musicians, while listening to what might be the only track currently in existence about it: “Midnight Service at the Mütter Museum” by the aforementioned Murder City Devils. Lead singer Spencer Moody is releasing so many poetry zines and solo recordings on Carlough’s labels that they’ve set up a subscription service specifically for his content.

While a cassette might feel like a strange, almost antiquated cultural artifact, for Carlough and everyone involved in This & That Tapes, it represents a form of manipulable DIY technology that can be erased, reused, and updated as the user sees fit. “It’s the thing I’m the most attracted to,” he told The Key. “I like to be able to hold music and see it and think about it. It sort of feels like you’re connecting to the artist a bit when you’re holding a physical piece of their media.”

It’s that tactile connection to the music, to zines and art, that fuels everything Carlough does. Asked if he had long term plans for the label he said, “In my dreams ten years from now someone’s gonna find the This & That Tapes website and be like, ‘Oh, so and so did a release with this label. I’ve never heard of them. Oh, holy shit, this guy’s been doing great releases for like ten years. That’s so cool, why have I never heard of them?’ The dream is to sort of just keep doing this forever.”