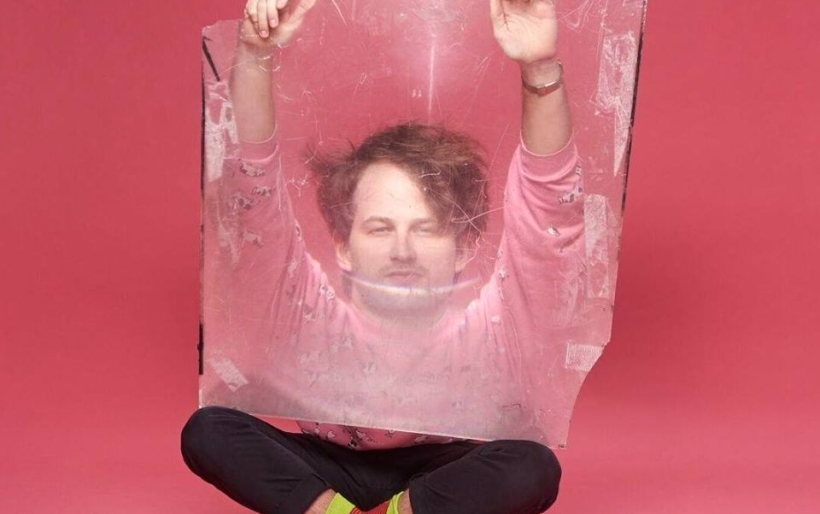 Laser Background | photo by Natalie Piserchio | courtesy of the artist

Andy Molholt neatly sums up the dilemma of the working artist on the opening lines of Laser Background‘s new song “Cerulean 20%”: “Some days I feel like I’m already dead / Other days I’m just getting started.”

This May, the eight-years-running Philadelphia psychedelic project is self-releasing Evergreen Legend, its fourth LP (and eighth release overall). Since we first met Molholt back in his days with The Armchairs, he’s worked out a way to make music and art his full-time gig with relative comfort: he’s been playing guitar with Speedy Ortiz since 2018, he founded the experimental pop project Coughy with friend Julian Fader of Ava Luna, and regularly returns to Laser Background as his schedule allows.

But even with so many pockets of artistic expression in one’s life, self-doubt is ever-present, as we hear later on in “Cerulean 20%”: “All my friends blame Mercury retrograde / but in my opinion we’re halfway afraid the puzzle pieces won’t align / and our graves will reward our mistakes.” It both acknowledges a fear of failure — or worse, a fear of being forgotten — while also striving to do the best work one can. It’s the most candid and vulnerable we’ve heard Molholt be in Laser Background, a project that often hides its meanings beneath alluring and impressionistic canvases of sound.

“Cerulean 20%,” and all of Evergreen Legend, was performed by Molholt with his old Armchairs bandmate Michael Chadwick, as well as Fader and his Ava Luna bandmate Carlos Hernandez; Julian and Carlos also mixed the project, and it can be pre-ordered via Bandcamp here.

Below watch a hypnotic music video for the song, made up of abstract digital animations by Grant Bouvier. Laser Background had announced a tour to go with Evergreen Legend when the album was announced earlier this month, and though those plans are currently on pause, their June 6 headlining concert at Boot & Saddle is for now still on as scheduled. Get details on that show at the XPN Concert Calendar.