Checking In With... Jacqueline Constance - WXPN 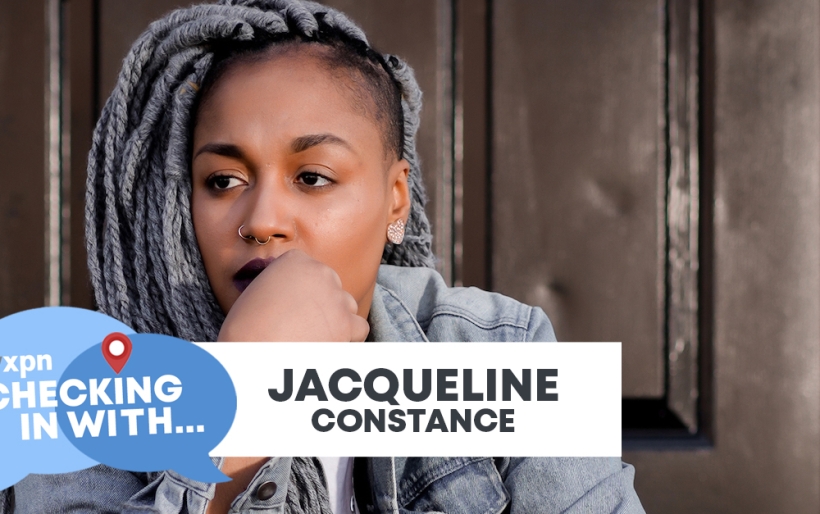 Jacqueline Constance | photo by Deuce Pearsall | courtesy of the artist

Checking In With… Jacqueline Constance

In times of crisis, it’s more important than ever to check in on your friends and loved ones. Here at XPN, we’re Checking In With our extended musical family to see how they’re holding up during the Coronavirus quarantine…and what music has kept them grounded. Today, John Vettese chats with Jacqueline Constance.

Philadelphia singer-songwriter, producer and soundscaper Jacqueline Constance had her calendar essentially wiped clean when Coronavirus hit, and she’s not only needed to find alternate ways to reach her fans, she’s been looking for stuff to keep busy. So the first week of being homebound, Jacqueline took to her Instagram stories to interact with fans, asking them questions — more specifically, questions about her. “What were your first impressions of me?”

As she told us via phone, “I think a lot of times as artists, we tend to get so much critique, so many people who may have negative things to say, sometimes it’s nice to engage with fans to get their real perspective of who you are as an artist and as a person, without them trolling you, or being mean, or vindictive, anything like that.” Posing the questions and reacting to the answers in real time was super interesting, she says. “Supporters are supporters, fans are fans, but it’s still weird to have people hold me in that high regard,” she says. “It was affirming to hear a lot of that stuff, and it was interesting to be able to engage with people like that, especially among the circumstances, and not being able to engage with people in a physical sense.”

Jacqueline also chatted with us about music that’s been getting her through; listen to her Checking In song picks and our conversation below.

Checking In With Jacqueline Constance

“I grew up in the era where the music video was the biggest medium to really get your foot in the door, to get your song really heard. I think I was watching BET, and the video for ‘Ms. Fat Booty’ came on. I was like ‘this is amazing!’ The storytelling is great, the video is shot super cool, almost like a comic book or a graphic novel. I was a kid, but I rememeber the story in it, and how musical it was, and the Aretha Franklin sample…”

Song That Raises Your Spirits: “La Brea” by Alex Isley

“Her music is so positive and high-energy, but then she has this amazing voice on top of it. The song is super calm and collected but it has this super positive message. I’m not the biggest on like super duper positive songs, but this one in particular is one of my favorites, I play it at least once a day. It’s definitely in my workout playlist, I usually play it towards the end; it’s my closer because the words are so positive, ‘look how far you’ve come’ lyrics. It’s definitely one of my faves to bring a quick smile to my day before it gets started.”

“Philly has all these pockets of artists and sometimes we mix, sometimes we don’t. Me and Joie Kathos have been friends for yers and we’ve always been on each other’s musical radar. But a year or so into our friendship, I ended up getinng into a really bad car accident. I had a concussion. And I’m healing, I’m going through it, I’m not a good healer, I’m not good at sitting down, and this injury sat me down for a second. A month after that, I ended up going to a studio session with Joie, and we were just writing, and I sat down and wrote a verse around that experince. It’s been a song that’s super near and ear to both of us ever since. It pushed me to create, it pushed me to become a super duper honest artist.”