Checking In With... Steve Earle - WXPN 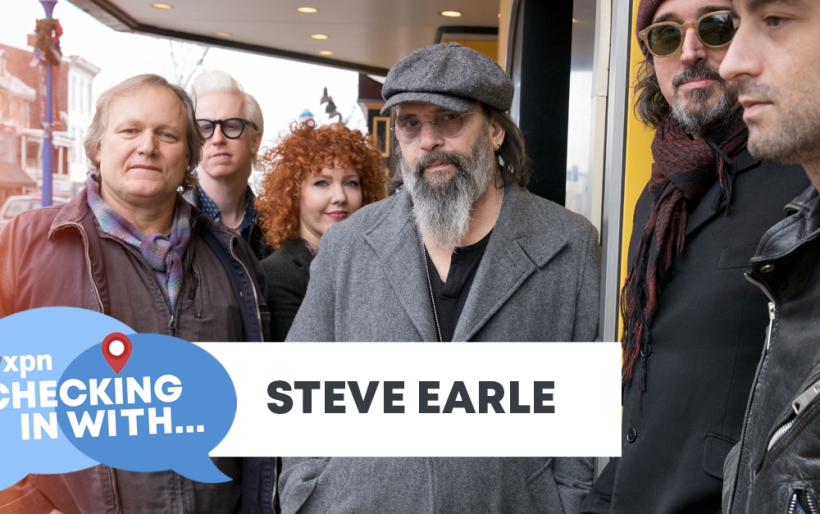 Steve Earle | photo by Tom Bejgrowicz | Courtesy of the artist

Checking In With… Steve Earle

In times of crisis, it’s more important than ever to check in on your friends and loved ones. Here at XPN, we’re Checking In With our extended musical family to see how they’re holding up during the Coronavirus quarantine…and what music has kept them grounded. Today, Dan Reed chats with Steve Earle.

Singer-songwriter legend Steve Earle was acting on Broadway when the Coronavirus hit the U.S. this winter. As he tells us over the phone, getting out of New York was a bit of a frenzy; the show, Coal Country, closed the same day Broadway in general closed, the day his son’s school and his gym closed, so he decided to pack up and get out of town, retreating to his house in Tennessee. “I took some guitars I was gonna move here before tour started anyway,” he says. “My tour manager rented a van and we loaded them up and drove down here last Wednesday, and we’ve been here ever since.” Earle’s new album with The Dukes, Ghosts of West Virginia, comes out May 22, and as of right now, his late spring / early summer tour in support of it is still on track. We talked about that, about acting, and about some of his songwriting heroes.

Checking In With Steve Earle

Favorite Song Of All Time: “Just Like A Woman” by Bob Dylan

“There are a lot of Bob Dylan songs I wish I wrote. This one I’m still taking apart from time to time and trying to figure out how in the world he did what he did when he did it. He is the guy who raised rock and roll to literature and this is from the album where that happens once and for all. It’s a love song but a love song where he applies all this literary prowess that probably no songwriter had quite commanded before. He’d written protest songs and songs based on more abstract poetry, and he applied that to writing about something that happened to him and hurt him. Like some other writers I know, myself included sometimes, and there’s a certain amount of revenge involved when a love song gets written. There’s a little of that in this, and I think every single phrase in it is perfect and I teach it in my songwriting workshop from time to time.”

Song You’re Most Proud of Working On: “This City” by Steve Earle from HBO’s Treme

“I’ve written other songs I think are good as this, but I haven’t written any better. I like these projects, I like the stuff when I ‘m given an assignment. And with this, we were shooting a scene on Frenchman Street…and the writers would be in the pits all day, and after they got done writing, they’d come and hang out on set. So David [Simon] came down and it was really late, after second meal for sure, and he pulled me aside and said ‘Hey, I need to you to write a song that your character would have written right after the storm in ’05.’ So I went home and wrote this, and I was really proud of the song itself, I wrote it that night. Also, Alain Toussaint wrote this horn chart, and it was the one time I got to work with him, T-Bone Burnett and Alain Toussaint are great New Orleans players on this.”