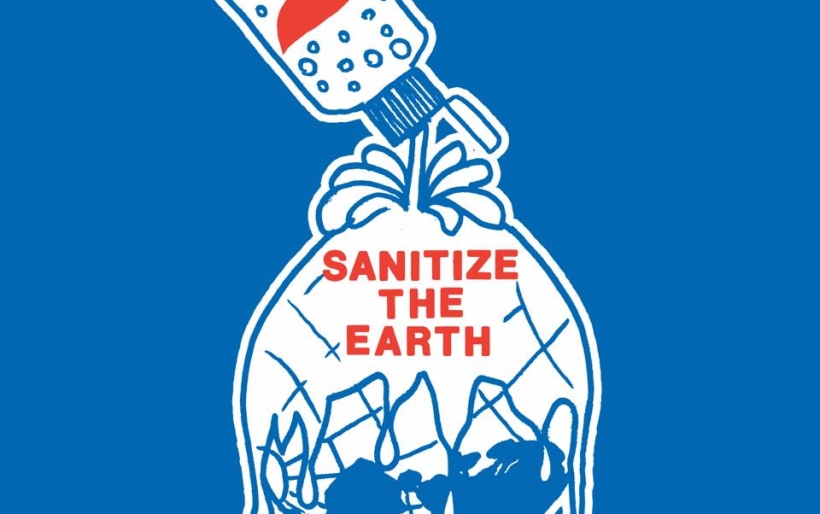 Sanatize the Earth | illustration by Perry Shall | courtesy of the artist

The Skeleton Key: Wash your hands and check out this list of ways to cope with quarantine through music

I’ve seen a lot of articles that are all HOW TO GET THE MOST OUT OF YOUR QUARANTINE TIME as if this is some sort of video game that you can win. Let’s be clear here: there is no winning. The only thing any of us can do during these times is try to stay healthy – both physically and mentally – and do what we can to support our friends and neighbors.

There is no one way to deal with this situation. If you want to work on a million projects, that’s fine. If you want to stay in bed all day and scroll through Instagram, that’s cool too. This is literally an ongoing nightmare and the only thing any of us can do is hold on tight, stay inside as much as possible, and keep up that social distancing and hand washing. I can’t really help with any of this but what I can do is give you lots of things to look at and listen to during these times of quarantine, specifically highlighting Philadelphia music and musicians.

So let’s do that.

One of the things that has given me at least a modicum of joy over the past few weeks is seeing people go back into their own collections and upload old albums and videos and whatever else. Sure, streaming services are great but they are incredibly, incredibly limited, especially when it comes to less popular bands. Which is to say: while I’ve wanted to revisit the music of Barking Spiders, a really excellent rock n’ roll band that came out of the ashes of the fabled This Radiant Boy, I wasn’t able to until two weeks ago when they put up a Bandcamp. I guess there was a CD but I have literally no clue where my copy might be, assuming I ever had one.

I’m usually a bit wary when it comes to punk and other DIY music from the 2000s but I definitely feel like West Philly and really just the city as a whole did a very good job at creating stuff that was not only fun but shied away from so many of the corny, rehashed cliches of the time. You had awesome rock bands like Barking Spiders, Pony Pants, and Bad News Bats that played almost every weekend at Danger Danger. You had more avant groups like Grandchildren and Make a Rising that laid the foundation for so many who are still inspired by everything they were doing 10, 15 years ago. And you had punk bands like The Low Budgets and Witch Hunt that still sound relevant today.

If you’ve read any of the articles I’ve written here at The Key over the past couple years you’ll notice that I’m a big fan of archives. Back in January I even put together a piece all about people who collect flyers and why that’s important. Creating our own histories is incredibly necessary, especially when it comes to underground art and music.

Not only is it great to rediscover songs from bands you used to see all the time but it feels especially important when it comes to discovering things for the first time. That can be something from 10 years ago, like the awesome video of noise rockers Ugh God at a South Philly block party I came across the other day, or it can be the amazing bootlegs of the Buzzcocks and The Stranglers playing at Emerald City in Cherry Hill in the early ’80s that I found on a local blog.

Speaking of Ugh God I just got word that Dangerbird, who they did a split with a a decade ago, is working on their fourth album, their first since 2011. It’s been a while since they’ve played a show so maybe you don’t remember how much the Neil Young-turned-to-11 band rules, but let me tell you as the president and let’s face it the lone member of the fanclub, this is very exciting. Please give the following track a listen and revel in the glory of loud guitar riffs:

Let’s bring this back around to Things You Can Do In Quarantine: years ago BJ from Dangerbird and SRA Records introduced me to what he calls The Challenge, which is when you listen to everything a band has put out from start to finish. That includes the stinkers, that weird metal crossover album, that even weirder prog album – I’m looking at you here Bad Religion – everything. There are variations on the theme like when you focus on one musician who has been in many different bands. You get the idea.

The purpose of a Challenge is not just to make yourself suffer but to get a better understanding of a favorite musician. It might be some nerd stuff but it’s also quite fun. And thanks to the magic of the internet, mostly Bandcamp and YouTube, you can make this happen pretty easily these days.

There are three Philadelphia-related Challenges I’d suggest you do:

Flag of Democracy – This punk three piece has been going strong for almost 40 years, putting out album after album of fast, fun tunes. I have listened to all of FOD’s albums many, many times over and from Shatter Your Day (1986) to No School, No Core (2018) it’s nothing but bangers. You can hear it all on the SRA records Bandcamp.

The Sun Ra Arkestra – There isn’t anything I can say about the Arkestra that hasn’t been said already. They are just one of the most fantastic bands in the history of modern music. While their Bandcamp doesn’t have every album – as the Wikipedia specifically for the back catalog notes: “The Sun Ra discography is one of the largest discographies in music history.” – there are 17 on there, which will definitely keep you listening for a very long time. Dig in.

The Roots – Philly’s favorite hip hop group started as The Square Roots back in 1989 and have released a total of 18 albums over the ensuing years. We all have a favorite but with a band this talented it can be a treat to check out the stuff you might have forgotten about or just never paid attention to in the first place. I’m pretty sure everything is up on Spotify but if it’s not just check in that big box of CDs gathering dust in your closet, I bet there’s at least one Roots album in those stacks.

On top of all that, Acid Mothers Temple, Neil Young, and Sonic Youth have all either uploaded old recordings or in the case of Young opened up his very deep archives for free to the public. The Sonic Youth stuff is especially cool because it’s a collection of live shows including one from the legendary City Gardens in Trenton in 1987. As of print time there are 18 albums on their Bandcamp and I’m super excited to see what goes up next.

Something else I’ve been keeping my eye on recently has been the Tim Morris YouTube channel. The late Morris – he sadly passed away in 2003 – was a fixture at punk and hardcore shows in New Jersey, Pennsylvania, and New York for years, always with a video camera attached to his face. His collection was entrusted to another archivist, Chris Delaware from the @delaware90shc account on Instagram (true nerds will recognize that name from that piece I wrote about flyers a couple months back), and he’s been digitizing and uploading them to YouTube.

Not only are there some remarkable videos of well-known bands – check out Rye Coalition at John Hiltz’s house in ‘96! Lungfish at the Brighton Bar in ‘98! Ink & Dagger at the Church that same year! June of 44 at the Middle East! – but it’s not just heavy hitters. Well, that’s not true. They’re all heavy hitters. But you might not recognize the brilliance of Frail or Seein’ Red or Botch but really what are you waiting for?! My favorite part of all of these is that unlike so much other similar documentation the camera is rarely just focused on the band and instead includes the crowd, the space, and everything else going on.

While I haven’t been keeping up with all the livestreaming going on I’ve been trying my best to tune in to at least one a day. While it’s been nice to see familiar faces like Teenage Halloween and Marissa Paternoster, it’s been equally rewarding to be able to watch bands that I’ve never really checked out before. And yes, I’m talking about Orville Peck. Obviously.

On the 10th the previously scheduled Monthly Fund concert will be broadcast online. Benefiting Pathways to Housing PA, the show will include performances from Likebirds, Tubey Frank, Snow Caps, and Rachel Eve. Visit the Facebook page for more information.

While he hasn’t been playing any music online, I’ve been very happy to see the art of Hound’s Perry Shall pop up regularly on Instagram. Not only has he been making some very fun and deeply sardonic quarantine-related graphics (you can see one at the top of this story), but he also did the cover for that Don’t Stand So Close To Me: A Lame​-​O Compilation For Self Isolation album that just came out that includes tracks from Hurry, Shannen Moser, Superweaks, Mike Bell & The Movies, Gladie, and so many more. Did I mention there’s a new Wild Flowers of America video – that’s Perry’s power pop band, in case you didn’t know – all about hand washing? Amazing!

Alright, two last things and then I’m going back to my cave. The first is that you should be sure to read The Key’s Shaun Brady’s jazz column this month because it’s all about the impact of Covid-19 on the Philly scene. This was supposed to be Jazz Appreciation Month in Philadelphia and the loss of that yearly event, like the loss of so many things these days, is palpable.

Secondly, and this is unfortunately related, our own Gene Shay has been hospitalized with this horrible disease for the past week. There’s been a fundraiser set up for his recovery that doubles as the outlet for all updates, so please check that out. Just as importantly take a look at this article from Gene’s retirement from WXPN in 2015 where a whole mess of musicians came together to sing for him. It’s real sweet and we can all use a little bit of that these days.

That is it for now. I will be back in a couple weeks with even more things to keep you occupied while we all wait for this collective nightmare to be over. As usual, feel free to hit me up on Twitter at @talkofthetizzy with any hot tips or rare punk demos. Speaking of Twitter, I saw a post on there the other day from Paint It Black promising an outdoor show when we can all hang out again. If you’ve ever been to one of the hardcore band’s absolutely wild gigs, you know how cool this is going to be. Fingers crossed it happens sooner rather than later.