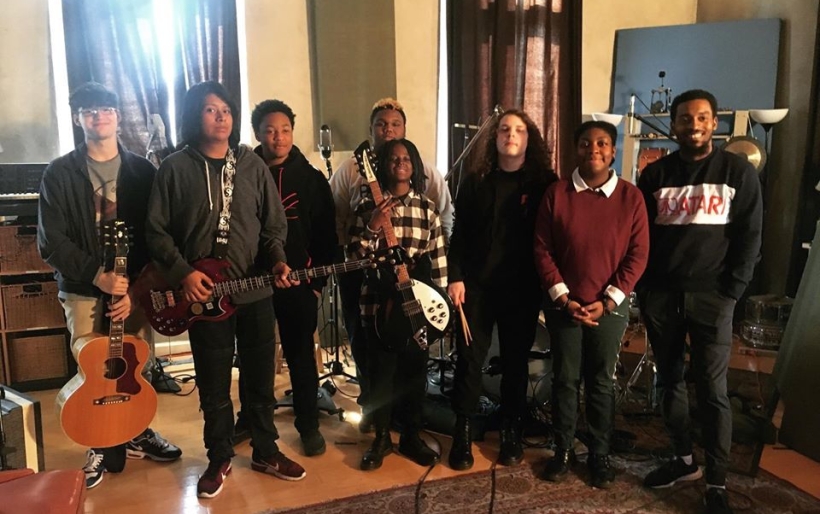 Rock To The Future students recently had the chance to work with local rapper Chill Moody on a new song. High school students in the organization’s Student House Band wrote the original song, called “The Beauty in Sadness,” with Moody, and recorded it earlier this year at Miner Street Recordings in collaboration with Weathervane Music Organization.

“We had a really good time creating this song,” Chill Moody said. “I was instantly inspired by how talented these students are and how confident they were in their abilities. Both our writing session and our studio session I got to see each student come into their own and showcase where they were strong, and we made a really dope record.”

Rock To The Future students Chanel Ketter, Nia Collins Davenport, Will Iwer, Isaiah Osorio-Noble, Jeffery Sayre, and Brandon Watters collaborated on the song, each writing parts of the song and playing instruments including bass, drums, and guitar.

“The song means a lot to me,” said Ketter, who wrote the track’s structure and guitar parts. “It really took me a lot of practice and studying of music to make something like this. It all started in my room with a voice recording and writing the song out of boredom. I wanted to show it to my band to see if we could do something with it. Working with my song it opened my band up to different music styles and different ways in playing our instruments, we all learned how to work with each other even if it gets tough. Overall the process of writing  and recording this song was challenging but we all succeeded.”

The students will perform the song for the first time at Rock To The Future’s upcoming Music for All Ball on Saturday, April 18. Though they can’t hold the event in person as scheduled, RTTF is taking it completely online as they celebrate 10 years of local youth music programming. The ball will feature student collaborations with other local musicians, including Frances Quinlan of Hop Along and singer-songwriter Namarah. Read more about the event and RSVP here.